Finest Pizza and Deli not closing because Le Souk went away

In recent months we've noticed that Finest Pizza & Deli on Avenue B at Fourth Street was no longer open 24 hours... A Curbed commenter wrote on this post yesterday:

"Because of La Souk being shut down, the bodega on Avenue B/4th street (next door) will not be renewing his lease. His profits are down $2000.00 a month since their closing. I liked it so much more when someone complained about the noise they were told to 'Shut Up'." 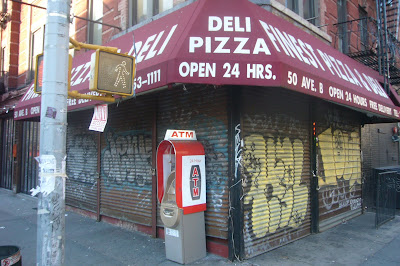 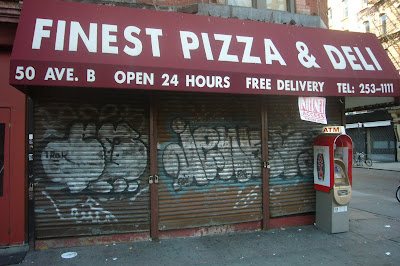 That's just not true. There has been a minor movement to show what a loss Le Souk's closing has been on the neighborhood... those comments like, "Le Souk made the LES upscale."

At the CB3/SLA meeting in October, a Le Souk proponent stood up and said: "the community was in shambles while Le Souk was closed." The argument focused on economics and the idea that this is not the time to shutter a club that brings much business to the neighborhood.

In any event, the Finest Pizza & Deli is NOT closing because Le Souk closed. Straight from an umimpeachable source:

Abdul reports that there just isn't the business necessary for them to stay open late. They will stay open until around midnight or so on normal nights and possibly a bit later on weekends or if it gets crowded. He stated that it has nothing to do with Le Souk's closing, that the business had been dying for a while.

probably because it's disgusting pizza. either be a bodega, or be a pizza place. sick of all these spots, middle eastern spots, etc. that just can't not serve pizza too.

Pizza actually wasn't that bad here, most of the time it was no worse than your average neighborhood slice, and their prices were never above average.

Not a big loss but it was a nice convenience.