It has been more than a year since we checked in on this story. PS 122 on First Avenue at Ninth Street is getting a facelift... 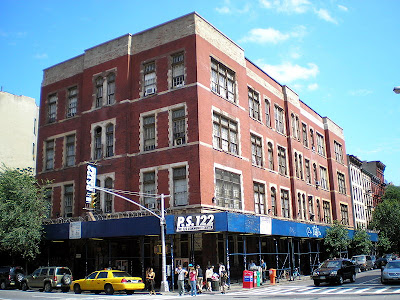 The Architect's Newspaper had the details in April 2010 on what all this will look like. According to the story: 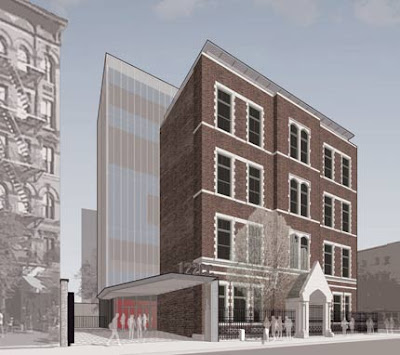 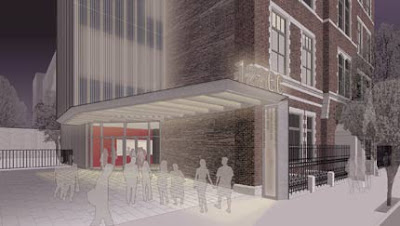 The construction is expected to be done by the summer of 2013.

And now that I've buried the lead... PS 122 is holding its final performance at this space Sunday Saturday before the renovations begin, according to TheaterMania. The theater will temporarily vacate its home to an off-site location during the renovations. For more information on the weekend performances, visit the PS 122 site here.

the final performance is on saturday night! not sunday. they're doing a series of special shows every night until then.

Oops. Sorry for the wrong date. I fixed. Thanks!

Just thought you'd apppreciate this image of same from back in the 80's (scroll down):

For some reason, that rendering isn't bothering me much. Except for the brick, which is the color doody.

I think it's good of the City to continue to try to maintain and upgrade formerly abandoned public school buildings as affordable space for community and arts groups.

There was a time during Mayor Koch's administration when the City said it was going to change this policy and instead try to get market rents and market sale prices for all these spaces. But this new market rate policy was strongly resisted by the community and artist groups in the old school building on Mulberry Street in Chinatown, and the City ended up dropping this market rate policy (at least for the vast majority of these buildings).

Did the artist groups essentially force the day care center out? I wasn't aware of that. If true, that's incredibly bad and sad.

yes, the theater and artists forced the day care out of ps122.

when ps122 was saved, a big part of the package was the day care center. they were about to be evicted from the third street music school where the top floors were being sold as condos to raise finds. ps122 was perfect.
this administration prefers sexy art to day care and presented the day care with impossible alternatives.
the council member did little to save the day care center.

Performnace Space DID NOT Force the day care center out. This has been an on-going pack of lies from people who know the truth and play the victim. The day care center was no longer a safe facility for the children & it WAS THE CITY that moved out & relocated the day care center. Let's just look at the obvious: The space the day care center used has remained empty to this day. If Performance Space forced them out would it not to have been to gain the space? Enough lies & truth bending from a bitter few.

what you get is an elevator. a lobby and a bar.
the space is still vacant because of the renovation.
how did the day car space suddenly become unsafe?
the fact is that there would be no ps122 if there had not been a day care center for the building.
have a drink in the new theater bar and toast the passing of a neighborhood day care center!

Yes, arts groups forced the daycare out, it is not even a point of contention.

Day care center attorney obtained emails through a FOIL request between Department of Cultural Affairs and P.S. 122 that proved this beyond any doubt.

The truth has indeed been bent, but not by the daycare.