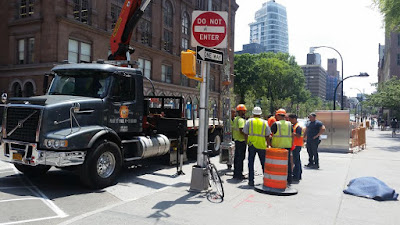 As we first reported on Sunday, The Alamo returns to Astor Place tomorrow. (The Parks Department now says the cube won't return until August. See below.)

Ahead of that, though, the first of Jim Power's mosaic lamp posts was just put in place today... ahead of the August date previously reported.

The city removed them in October 2014 to make way for the redesign of the Astor Place-Cooper Square area. There was talk that the poles would not come back, and Power even set out to destroy them himself.

As DNAinfo reported in May: "But after an outpouring of interest at community workshops, advocacy work from neighborhood groups, and an extensive petitioning process, the Mosaic Man’s art will live on in the plaza."

In total, seven of the light poles will again adorn Astor Place. 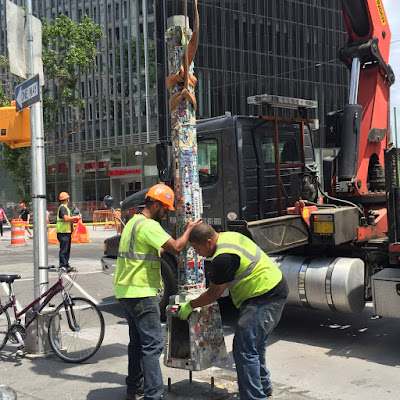 Given that this is still a very active work zone, the pole has been wrapped in protective, uh, wrapping... 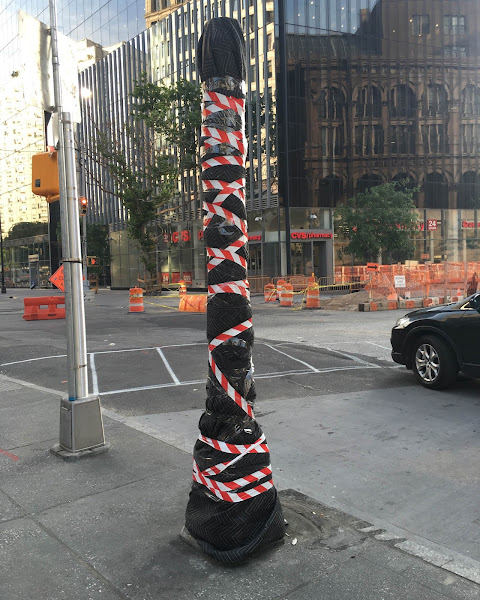 Great news! I haven't seen Jim around in a while, does anyone know if he's OK?

Anonymous 1:48, I saw him in Fine Fare last week. He looked fine.

Yeah, I have been saving broken plates and vases for Jim but have not seen him or Jessie Jane for quite a while. Anyone have any info?

It has no personality. Bad design. Power's poles help but it will always be just different pavement. Find some more trees when you bring the Alamo back. The new design really needs help.

I've seen Jim around in the past two weeks on Ave A. , he was in his motorized chair, looked fine.

You can't spell boondoggle without oo and my cement field delivers oohs and ahs in spades!

GOJIRA, JUST LEAVE THEM FOR ME AT THE FRONT DESK OF MY BUILDING OR ON THE SIDEWALK OUTSIDE.

I remember Jim when I was a kid hanging around Astor place, about twenty years ago...I thought he was just some kind of weird vagabond sticking pieces of glass to electric poles.

I wrote about Jim when he first started mosaic'ing poles in the late 80s. Back then the City treated his art like the punk bands they ticketed mercilessly for wheatpasting flyers (while giving big commercial wheatpasters free reign). It is an interesting evolution in the philosophy or ethos of the city, the fact that its bureaucracy is now not just tolerating but actively supporting these "squatted" pieces of street art. Go Jim Power!

I have loved those poles since 1986. So glad they're coming back.

I recall seeing Powers in the 1980s working on his mosaic projects in the Astor Place & Saint Marks areas.