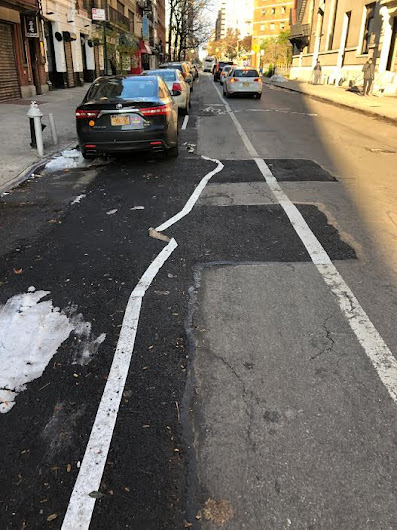 [Biking on 9th Street the other morning]

This 3,500-word investigation found that for at least two decades, the NYCHA routinely disputed tests that revealed lead in its apartments (The New York Times) ... de Blasio unveils plan to repair and upgrade 62,000 NYCHA apartments (ABC 7)

Behind the scenes with Robert Zerilli, the fourth-generation owner of Veniero’s on 11th Street (6sqft)

Video: A juvenile red-tailed hawk on 7th Street drops his lunch (The Post)

Book suggestions to buy locally on Small Business Saturday (Off the Grid) And... Shakespeare & Co. has opened an outpost on the Upper West Side (Jeremiah's Vanishing New York)

Overview of the Andy Warhol retrospective at the Whitney (Gotham Magazine) ... and closer to home, the exhibition "Andy Warhol: Endangered Species" continues over at the Ukrainian Museum on Sixth Street (EVG)

Artonement is a week-long pop-up show, which opened last night, presented by Adrian Wilson... you can check out the work from 10 a.m. to 6 p.m. daily until Nov. 28 at 198 Allen St., which is just south of Houston...

Meet Sparrowhawk, East Village based Ndé'ndai transcendental story artist, who will have these "tangible illusion" paintings on display and for sale at my Artonement show. 6pm opening tonight. #artonement #nativeamerican