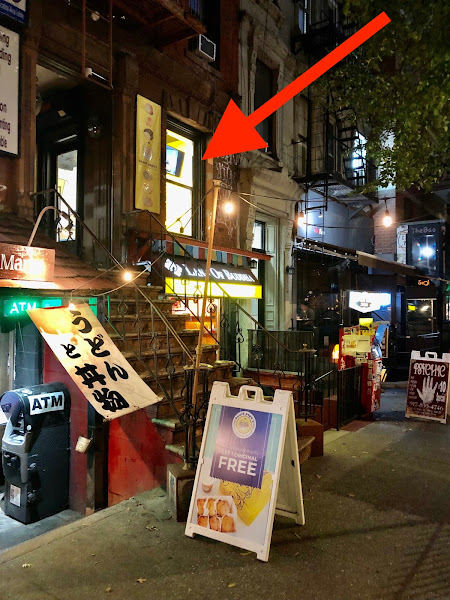 Beard Papa's is now open — as of Monday — on the second floor of 11 St. Mark's Place between Second Avenue and Third Avenue. (EV Arrow is up there to help!)
The 2000s-era chain that sells cream puffs started in Japan in 1999 and now has 400 locations in 15 countries.
Per the sidewalk signage, Beard Papa's is having a buy-five-get-one-free deal.
Posted by Grieve at 4:55 AM

Hardest-working arrow in the business, and for that we are grateful.

Back in the 70s and 80s, 11 Saint Mark's was home—on the lower level—to the restaurant of the same name, which some people called "The 11;" the front window, with its neon "EAT" sign was featured briefly—blink and you'd miss it—in the opening credits of Saturday Night Live.

I believe the owners—Barry Duke and Candy Dennis—still live in the neighborhood, but I haven't seen them in a while.

Scuba Diva, I loved EAT!! Went there many times in '86–'87. I can't remember the food at all, though. I wonder if any photos of it exist.