Reminders! The Charlie Parker Jazz Festival is back in Tompkins Square Park on Sunday 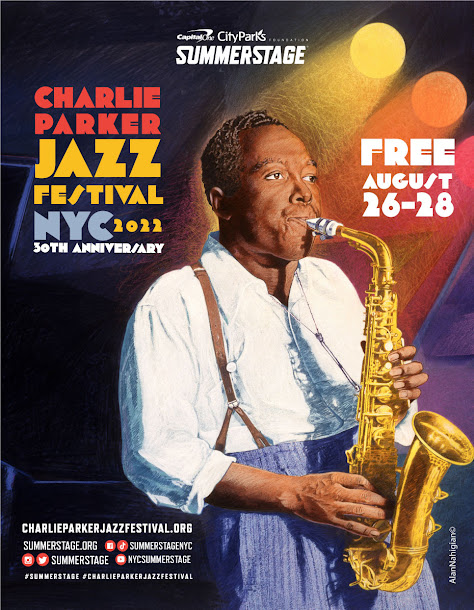 The Charlie Parker Jazz Festival is taking place this weekend...  with a return to Tompkins Square Park from 3-7 p.m. on Sunday.
Here's what to expect here via the SummerStage 2022 program:

An abbreviated version of the Charlie Parker Jazz Festival took place last year in Harlem; the 2020 slate was canceled with the pandemic.
The festival started in Tompkins Square Park in 1993 ... taking place near or on Parker's birthday on Aug. 29. Additional dates were added in Harlem in 2000.
Parker, who died in 1955 at age 34, lived at 151 Avenue B from 1950-1954. That residential building between Ninth Street and 10th Street is landmarked.
Posted by Grieve at 5:00 AM

Does anybody know does this have a specific start time?

Can we listen together via streaming on the other side of the ocean! Archie Shepp and Jason Moran
Were outstanding in @jazzgent belgium!!

Anybody know what time Jason Moran & Archie would start? 6pm or earlier?

Pasquale grasso already played. Bria playing now at 4:15pm. I'd guess they'll be on around 6pm