Bari bad news on the Bowery 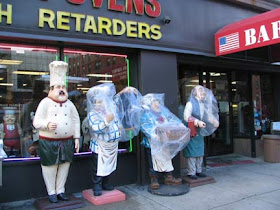 Patrick Hedlund at The Villager reports this week that the Bari family is selling a massive, eight-building portfolio on the Bowery. The parcel of land across the street from the New Museum has nearly 67,000 square feet of buildable space -- six lots on the Bowery at Prince Street. As Hedlund writes, "The Bari family has owned the property since the 1940s, using it for restaurant-equipment supply operations, and stand to cash in on the neighborhood's emergence as a destination for art galleries and luxury development." (Patrick's story wasn't online just yet....)

According to the Bari Web site:

Bari Equipment is a family-owned business with roots that go back generations. The company was started by my grandfather when he came over from Italy more than 75 years ago. Located in New York’s fabled Bowery District, the business is still in the very same neighborhood. It has also remained in the family. Through the years, my father, uncles, and I – along with our amazing staff – have all upheld the traditions of excellence started way back when.

Of course, it’s tradition that sets us apart. Our pizza ovens, crafted with an eye for detail and quality, have withstood the test of time. In fact, the very same ovens purchased half a century ago can still be found in pizzerias across NYC and beyond!

Here's a passage on the Bari family, who once owned the Sunshine Hotel, from the July 2004 Times:

Watching all of these developments carefully is the family that owns Bari Restaurant and Pizzeria Equipment, a business that takes up 10 storefronts at Prince Street and the Bowery. As owners of one of the district's oldest shops, the Baris seem to know what's coming.

"I'm trying to envision it five, ten years from now," said Anton Bari as he sat on one of the restaurant chairs offered for sale in the Bari Gallery, one of the family's many enterprises. "I don't see the restaurant suppliers. I don't know if the reputation will still be here."

Mr. Bari, his brothers Mike and Nick and a cousin also named Nick run a company established in the 1940's by their grandfather, Nicola Bari, a radio repairman and purveyor of cheese graters. Besides selling an encyclopedic variety of restaurant supplies, the Baris manufacture pizza ovens and refrigeration units that are used in kitchens from Brooklyn to Russia.

On occasion, the Bari brothers are greeted by acquaintances who encourage them to turn their shops into trendy bars. But unlike many other suppliers on the Bowery, the Baris don't rent their stores -- they own them. They can sit back and watch the changes on the street without the pressure of a landlord or a lease.

Across from the Baris' main showroom at 240 Bowery, the family owns another building, but this one is not all mixers and ovens. Through a set of red doors marked "No Loitering" and up the stairs, an entirely different Bowery staple is still in operation.

"I can't stand the stink in here," said Mike Bari, squinting his eyes and turning toward the exit. He was standing in the hallway of the Sunshine Hotel, an S.R.O. above one of the Baris' warehouse units that the family inherited when it bought the building 15 years ago.

Once home to 200 residents, the hotel now houses just 40, with each man paying (or not paying) about $10 a day for the privilege of inhabiting one of its cell-like rooms. In the lobby, where a clerk collects rent and a painting of the main characters from "The Sopranos" hangs on the wall, the Baris greet nearly every resident with a warm familiarity.

"We're not looking to throw anybody out," said Anton Bari, when asked why he doesn't simply convert the Sunshine into $4,000-a-month apartments. "If they had to leave here, they'd be lost." 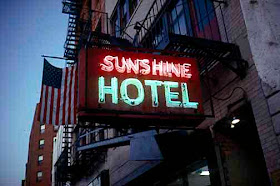 Here's a clip from the documentary Sunshine Hotel: