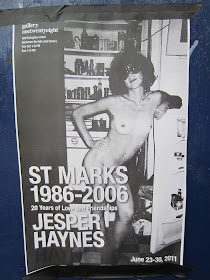 You can catch this exhibit by photographer Jesper Haynes starting tonight at Gallery Onetwentyeight, 128 Rivington St.

I planned on requesting a quick interview with Haynes... but decided to run an excerpt from his blog instead:

In 1986, I moved to my apartment on 90 St. Marks Place, in New York's East Village. It was above the St. Mark's Bar & Grill where the Rolling Stones had just filmed the video for "Waiting on a Friend". It was to be my home, and the backdrop for much of my photography, for the next 20 years.

In those days St. Marks was a rough place. It bustled with runaways and skate kids, with dealers and dime bag rappers and fabulously dressed low-lifes on their way to or from an after-hours club.

... however, life at St Marks began to change. The local fleabag movie house became a Gap clothing store. The Korean delis were replaced by Starbucks. Whole blocks were renovated and gentrified. St Marks was becoming hip. Rents began to rise and the artists, inevitably, started moving out.

My turn came in 2006 when my landlady, with whom I had developed a very close friendship, died. Her daughter inherited the building. Being a businesswoman, in a city that was now all about business, she saw the chance of higher rents and a different breed of renter. She duly gave us a three-month notice of eviction.

I still dream of that apartment and the intense, beautiful, often riotous, times I had there.
These photographs are an honest, spontaneous record of what I have lived and of the lives and loves for which my home in St. Marks became the setting. 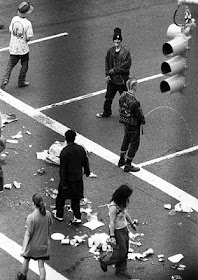