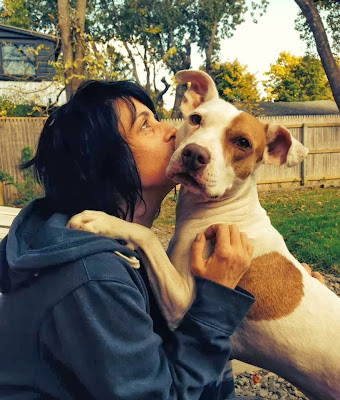 Word is spreading that Maggie Estep, the writer-poet-performance artist and all-around cool person who came to some fame while living in the East Village in the early 1990s, has died. She was 50. (She described herself as a "Novelist, occasional poet, dog-lover, handstand enthusiast" on her Facebook page.)

According to friends, she suffered a massive heart attack on Monday.

She published seven novels and two spoken-word CDs. In 1993, she became a familiar presence on MTV, who featured her poetry as well as performances on the network's "Spoken Word Unplugged" program.

From a September 1994 profile in The New York Times:

Success for Ms. Estep hasn't necessarily translated into more material possessions. Her walk-up studio on East Fifth Street looks like the home of a starving artist. The furnishings are spartan. A bookcase crammed with cassettes and novels stands in one corner of the room; a wooden desk crowned with a laptop computer fills the opposite corner, where Ms. Estep spends many an afternoon wrestling with her muse. Other than a loft bed, a couple of beat-up chairs and an electric guitar lying in the middle of the floor, the room is empty.

"I've gotten paranoid now," she said, referring to her recent success. "I think, 'Oh my God, everybody hates me because I get too much attention.'"

She was currently living in Upstate New York and working on a new book.

Some reaction to news of her death...

When I first encountered Maggie Estep, I was so baffled. I truly appreciate that. It's hard to do something that defies categorization.

Maggie Estep died. I'm lucky I got to be a kid when they played her videos on MTV. I miss writing "I Love Everybody" on people's sneakers

Maggie wasn't just the first spoken word rock star, I'd argue she was the only one. RIP Maggie Estep

Updated 2:40 p.m.
The A.V. Club has a nice essay on Estep this afternoon... some thoughts on her writing:

Estep was also a prolific novelist, writing blackly hilarious books full of screwed-up characters in seedy, smutty surroundings, like the dominatrix’s assistant in Diary Of An Emotional Idiot. She also wrote a trilogy of mystery novels (Hex, Gargantuan, and Flamethrower) centered on Ruby Murphy, a recovering alcoholic who gets inadvertently dragged into some of New York’s oddest crimes, usually involving horse racing.

Her most recent novel, 2009’s Alice Fantastic, also revolved around the racetrack, though there, too, it was just a setting for a much larger menagerie of animals, addicts, estranged lovers, lunatics, and others living on the fringe. She also said she had been working for years on The Angelmakers, a novel about female gangsters that she’d “written seven times and not yet gotten right.”

Here's a photo of Estep from Friday hugging writer Chloe Caldwell at a reading in Rhinebeck, N.Y. 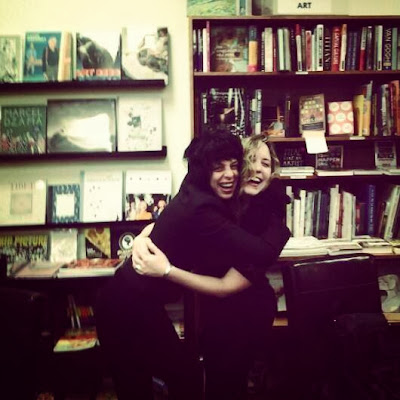