25 Great Jones St. returns to the land of undead developments 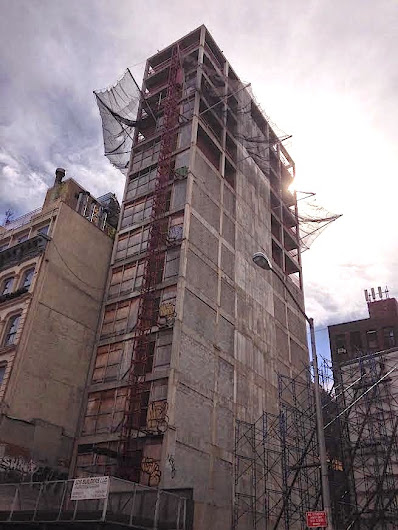 Expect some activity soon on that concrete and cinderblock tower on Great Jones and Lafayette. Once conceived as a hotel back in the heady years of 2007-2009, the building has sat dormant for years … while changing ownership and what not.

Back in April, The Commercial Observer got the first look at the new rendering for 22 Bond Street aka 25 Great Jones Street. The developers are transitioning the unfinished building into six condo units.

And yesterday, Goggla noticed that the official rendering is now up on the plywood outside the hulking slab of broken dreams the unfinished building... 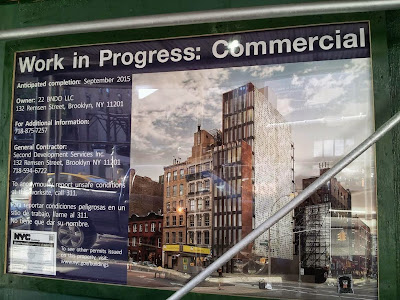 As for the look of the building, the Observer noted that BKSK Architects designed the exterior and TKA Studio is designing the interiors. "The façade will be made of glass and Corten steel, or weathering steel, the same material that was used for the exterior of Barclays Center."

Developers Second Development Services (SDS) and the Richport Group had some messy DOB paperwork to manage (stop work orders from previous owners). A look at DOB records shows that most of the necessary permits have now been approved.

For more background, you can check out Curbed's coverage here.

Previously on EV Grieve:
Your chance to buy a boutique hotel on Great Jones
Grieve at 5:05 AM
Share