The B-Movie King at the Anthology Film Archives this weekend 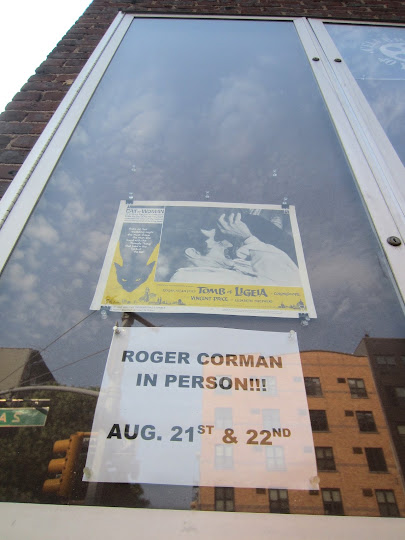 B-movie titan Roger Corman will be appearing tonight and tomorrow at the Anthology Film Archives on Second Avenue to introduce a few of his classics — "X: The Man with the X-Ray Eyes," "A Bucket of Blood" and "The Tomb of Ligeia."

The Wall Street Journal had an interview with the 89-year-old Corman yesterday. You can read that here. An excerpt as way of an introduction:

Among the 400-plus movies Roger Corman has produced or directed, there are titles more memorable than the films, such as “Attack of the Crab Monsters” and “Teenage Cave Man.”

But there also are early efforts from a string of famous directors and actors whose careers he helped to launch. They include Francis Ford Coppola (“Dementia 13”), Martin Scorsese (“Boxcar Bertha”), Peter Bogdanovich (“Voyage to the Planet of Prehistoric Women”) and Jack Nicholson, whom Mr. Corman first met in a method-acting class.

Mr. Corman ... could have single-handedly invented drive-in movies in the 1950s, when a postwar eruption of teenage culture created a new audience for entertainment at its most sensational. The B-movie impresario kept apace with the times, however, tapping into social trends—and wildly profitable and influential movie concepts—for a career that spans seven decades.

The Anthology is on Second Avenue at East Second Street. Find out more about the screenings here.

And to get you in the mood…