Longtime resident revisits the neighborhood for 'A Walk Around the Block' 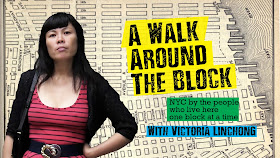 Today marks the 10th anniversary that Victoria Linchong, who was born and raised in the neighborhood, was evicted from her East Village apartment.
In commemoration of that life-changing event, Linchong — aka Viva Lamore — is releasing a web series that she started in 2014 titled "A Walk Around the Block."
Here's more about the series:

It's a simple idea: Victoria takes a longtime East Village resident on a walk around their block. A hundred years of history are revealed as they say hello to shopkeepers, reminisce about long gone stores, check out the street art, poke through community gardens, and gaze at the architectural curiosities of this unique neighborhood.

And a preview of the upcoming episodes...

• Jan. 25: BACK ON THE BLOCK — 11th STREET BETWEEN B & C
In 2009, Victoria first took a walk around her block and documented her connection with the shops, the school, and the many community gardens. Three years after she was evicted, she is back on the block, surveying the changes that have occurred and saying hello to old friends who have remained. Special double episode, combining the original walk around the block in 2009 with a walk around the same block in 2014.
• Feb. 22 : HOLY CANNOLI — 10th STREET BETWEEN 1ST & A
Victoria and photographer Richard Sandler walk around his formerly Italian block, finding not only the world's largest cannoli, but also traces of Jerry Rubins, Basquiat and the Beastie Boys.
March 29 : LA LUCHA CONTINUA — 8TH STREET BETWEEN B & C
Victoria goes for a walk with actress/director Elizabeth Ruf and the late filmmaker Roland Legiardi-Laura on their block, which seems to be the immigrant epicenter of the old Lower East Side, with vestiges of former Irish, German and Jewish enclaves where Puerto Rican pride now runs strong.
April 26: TWO OLD FUGS — 10TH STREET BETWEEN B & C
Victoria and housing activist Frank Morales reminisce about Diggers, dealers, dissidents, DAMP and the Avenue D Boys on a walk around his block.

Linchong said that she'd like to do more episodes, and is hopeful of securing some financing to make it happen.

After her eviction, she lived in Berlin for four years. These days, she's living in the Park Slope/Gowanus area.
"I've not been coming by the East Village that often — especially with the pandemic," she told me via an email. "But I do still have a lot of friends in the neighborhood and I come around sometimes to see them."
And what would she like people to take away from her series?
"The value of the East Village is its community. No other neighborhood in the whole world has been so shaped by its residents. Every episode shows this ...  Yet the longtime residents that make the East Village so great are rapidly being displaced by short-sighted moneyed interests," Linchong said. "I want people to see that the longtime residents of the neighborhood are valuable and their continued presence needs to be protected. What is a neighborhood if it doesn't have residents who are invested in their neighborhood, who have been part of the area's struggles, who know the story of every block?"
The episodes debut on the above dates at 7 p.m. on Vimeo ... as well as Facebook Live.
Grieve at 5:29 AM
Share