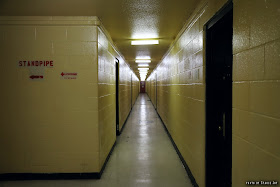 Text and photos by Stacie Joy
For months, residents of the Mariana Bracetti Plaza public housing development have experienced a wave of crimes taking place inside its hallways, staircases, courtyard, rooftop and playground, thanks to unlocked front doors and broken security system.
I am wondering what kind of activity I will see when I arrive here on Third Street and Avenue C on a sunny Thursday morning. Will there be people doing, buying and selling drugs, using the place as a toilet [NSFW], engaging in sex work, and fencing goods (via stolen Amazon packages from neighboring buildings) as resident and activist Kanielle Hernandez alleges?
Yes, it turns out — all of those things. Plus, I witness two people attempting to break into an apartment, people using the hallways as an illegal business site, and a steady stream of open-air courtyard and front-step drug purchases…sometimes with a line of people waiting their turn.

According to Kanielle, who lives in the building with her son and her grandfather, plus her dog, Denim (you can read about Kanielle’s fight to keep Denim, a pit bull, in this New York Times piece from 2009) finding people passed out or doing drugs in the hallway has become an everyday occurrence. 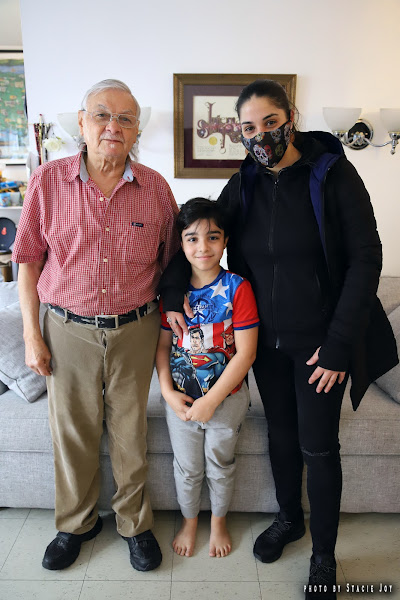 Residents say that the locks to the front doors have not worked in more than four months, and lack of security and police presence has made it easy for people to trespass.

I speak to PSA 4 housing officers who arrive to get an early lunch at Rossy’s Bakery, right across the street from the buildings in question. What can be done, I ask them?
“Our hands are tied. If you want action, you have to start at the top with the mayor and commissioner. We are being told not to make any arrests,” Officer Leninard and his partner tell me. 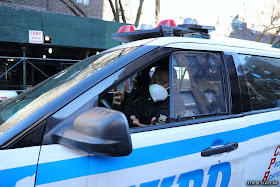 Kanielle, who was born and raised in the building, and former tenant Yvette Maria, whose mother still lives upstairs, show me around the buildings. Kanielle and I then discuss the indignities that the residents have been made to suffer, what she hopes can happen, and about the petition she is starting to effect change. 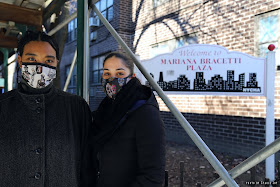 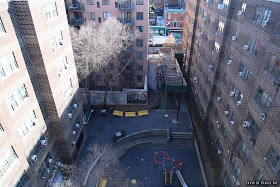 Speaking about the ongoing lack of repairs and the conditions you detailed, such as drug sales and use, homeless people living in the stairways, people using the building as a toilet, how long has this been happening?
I believe this started with the sidewalk bridges. Landlords put up these dark ugly scaffolds as a resolution instead of actual repairs. Then they stay up for years without any actual work being done. But someone is getting paid to have these sidewalk bridges just up with no real purpose. It creates dark hidden places for illegal activity.
With the sidewalk bridges came more and more and more homeless, drug addicts and alcoholics. The money being spent to have these useless sidewalk bridges up should be used to actually improve the building conditions.
Individuals started coming to our building to use it as a bathroom and get high. Then as they saw they could get away with more and more it just has become a free for all. You find them in your hallway trying to get high or steal packages or sleep. Feels like we are living in an episode of “The Walking Dead” NYC/LES season. 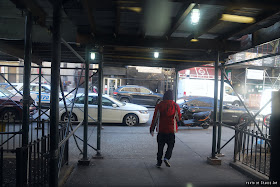 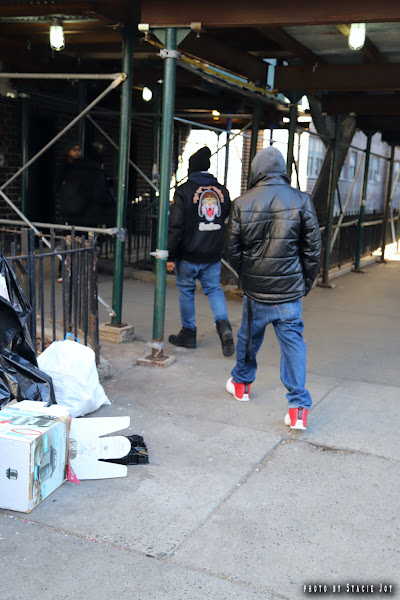 Have you talked to the building’s management (NYCHA) about the situation?
The management office is absolutely no help. I call them and they tell me I need to call the police. I call the police they tell me to call my management office. The housing manager we have is the worst we have ever had. Absolutely no help to our building at all.
Why did you decide to film the transgressions?
I decided to start recording and posting because I just can’t believe we have such occurrences right outside of our apartment doors. Our home. I walk into my elevator and someone is full-on smoking a cigarette or a blunt. And then get mad at me for being upset and saying something.
I don’t care what you do but do it right. Be conscious of how your decisions impact others. Basic consideration and common sense. Like, for example, walking into a building you don’t live in to pee and then deciding to pee right in front of someone’s door. There are some levels of WTF! I need to get through before I can reach my compassion. Yes, I understand addiction is a disease but it’s time to find some real solutions with long-term positive results. Maybe whatever we accomplish here can be extended to other developments. And li’l by li’l we can make a positive change to our community.
Are you concerned about your safety?
Yes, I’m always concerned for not just my safety but also the safety of my family, friends and neighbors. Yes, I can just move and be done with the bullshit. But this is my home. I was born and raised in this building.
As kids, we took the stairs freely. We ran around playing freely. And it was a time of heavy poverty and drugs and gangs. But there was a different energy back then. It’s hard to explain but I’m sure a lot of people will understand what I’m trying to say and resonate with it.
Do you know where the people are coming from? Have you reported what’s been happening downstairs and at some problematic locations nearby, like Third Street and Avenue C, to the police? If so, have they responded? What happens or doesn’t happen?
The people are coming from all over really. Our building has become the headquarters for them. Some bring beach chairs and blankets to sleep in the staircase or roof. Mattresses, CitiBikes and shopping carts full of stuff.
I have been calling 911 and 311 and reporting what’s going on for two years if not longer. They would come back then but as of recent world events there is a big lack of response. Because, to the rest of the world, junkies invading our building is the least of their problems. I get it. I think every building surrounding Third Street and Avenue C has called to complain about that corner.
For months a bunch of homeless addicts lived under the scaffold on Avenue C. They had mattresses and little forts built. And then they would shoot up in broad daylight, with needles in the arms, while people, including kids, walked by. 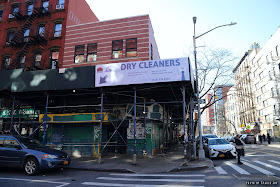 How does this make you feel that these kinds of things are happening in your building?

Depressed and discouraged. I don’t really go downstairs like I used to. I think about moving out all the time but my grandpa loves it here. He loves to walk around and go to the supermarket, but we have encountered some incidents where he felt frightened by different individuals approaching him for money. 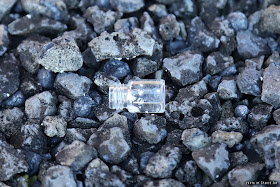 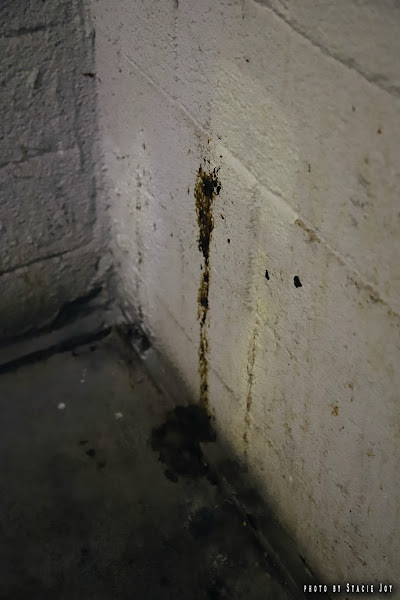 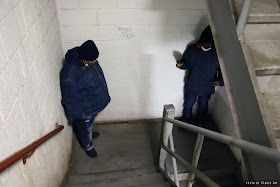 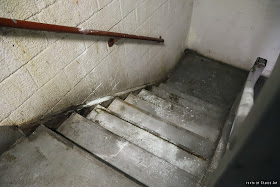 You mentioned starting a newsletter and a petition for change. How has that been going?

The newsletter is still in the works but we have written up a petition and it’s available for signatures here.
What would you like to see happen? How can the community, elected officials and NYCHA help?

In all honesty, I would like to see massive change on all levels but for now, I would like to have all the surrounding sidewalk bridges removed. The money being saved by removing the sidewalk bridges should be used to do something to improve the building. Like new elevators or security cameras. We could work with the local precinct to have more police patrol. And a police light on the corner. And a homeless program to redirect individuals to places that can help them.
As for NYCHA, they need to be better involved in their buildings. Not just for tenants but the employees too. Housing workers should not have to clean up human shit and used condoms and drug needles. They definitely don’t get paid enough for that. If we set boundaries, we will see results.
And as for the residents of the building who contribute to the demise of our home and community: Stop it! Stop smoking in the elevators or letting your guest do it. Don’t have your boyfriend selling drugs out of your apartment…tell them to go and deliver. It’s 2021, let’s get it together.
If you don’t want people to notice you, be more discreet. That’s your hustle. No doubt. Do it right. Control your customers. Sloppy business brings attention.
The tenants who do these things stick out. A lot of the residents have lived here for years. And it’s only seven floors. People see and people talk. We need to practice better judgment when it comes to how we choose to contribute to our home, our community. Are your choices impacting us in a good way or bad way? What can you do to be better tenants?
Speak up for the building you live in that you call home. Do your part! Make sure you are contributing to the uprise of our building and community, not the downfall of it. And this should apply to all [public housing] developments. We all deserve to live in a safe and peaceful environment. Projects or no projects — it’s our home! 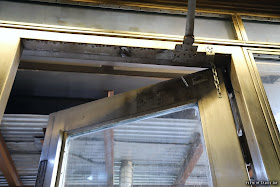 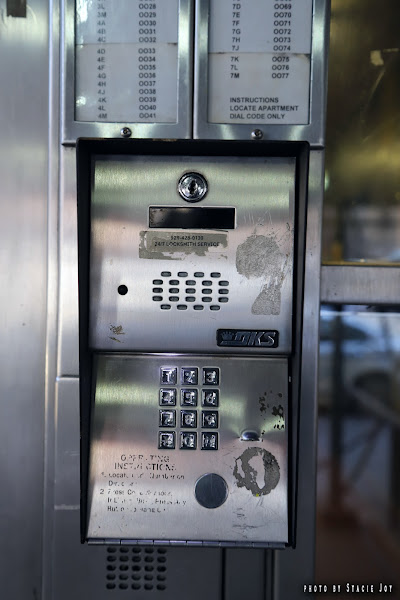 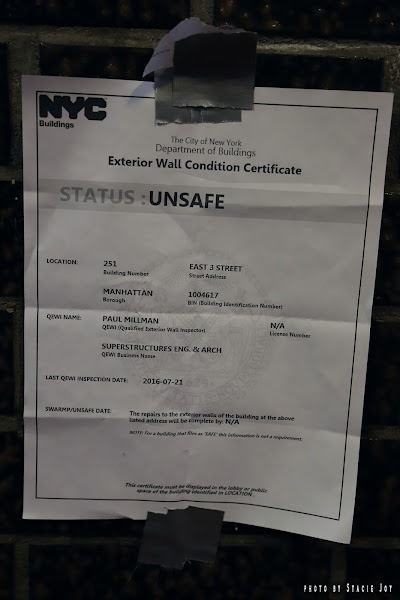 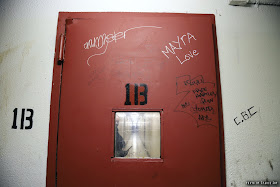 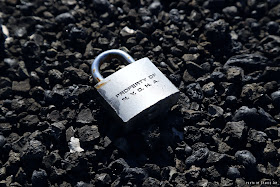 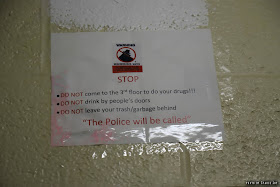 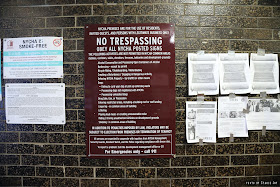 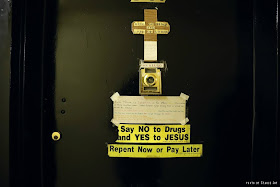 You can sign the petition here and Kanielle is actively looking to partner with local elected offices to facilitate repairs and security for the building residents.
Grieve at 5:00 AM
Share