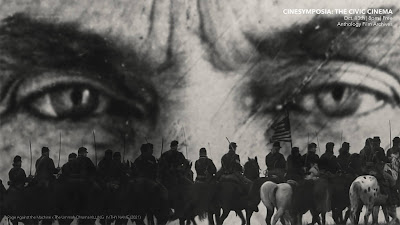 Starting on Wednesday night, the Anthology Film Archives will host a series of one-hour Cinema Salons dubbed "Cinesymposia."
Per the Anthology's website:

Host and curator cherry brice jr. described it this way in an email to EVG:

These Salons are a mini-festival of radical films: a screening and discussion series with rowdy, audience-led debate, moderated by a panel from film, community organizing, and philosophy backgrounds.

The first screening on Wednesday night (at 8) is free:

The Civic Cinema. The enclosure of the commons was a political project long before it was a public health one. Whatever happened to the ancient agora? What became of the public sphere? Can the film theater — especially one closed to the general public — fill the role of a community consciousness-raising space? Featuring three experiments in cross-cultural discourse, the films in this program beg the question of just what the nature of dialogue is.

The subsequent screenings on Oct. 20 and Nov. 3 are each $7. Find more details here.
The Anthology Film Archives is at 32 Second Ave. at Second Street.
Grieve at 5:00 AM
Share