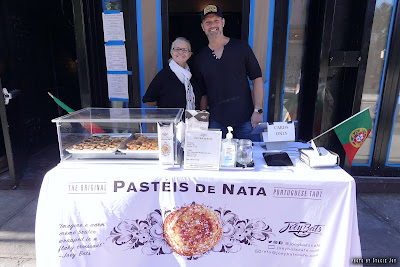 Photo last week by Stacie Joy
Joey Bats Café is opening soon at 50 Avenue B... and starting last week, they've been peddling their pastéis de nata from a sidewalk table here between Third Street and Fourth Street.
Joey Batista (aka Bats) started selling the Portuguese custard tarts several years back before opening his first outpost at 129 Allen St. near Rivington.
Here's more via a Hungry City feature at the Times from April 2019:

Mr. Batista, 39, the son of Portuguese immigrants, started selling pastéis de nata at street fairs around New York in 2016. The recipe was developed by his mother, Isabel Fernandes, a formidable home cook who made desserts for her brother's restaurant in their hometown, Ludlow, Mass., before heading the kitchen at her son's cafe.

The Avenue B location — a sizeable two-level space — will feature elements of the cafe as well as a lounge featuring comedy and live music. Joey Bats received approval for a liquor license here during last month's CB3 meeting.
No. 50 has sat empty for several years. The pizzeria Johnny Favorite's shuttered on the Fourth Street side in August 2017 after debuting in April 2015. Lovecraft, inspired by horror writer H. P. Lovecraft, closed in early 2018 after three-and-a-half years in business.
Grieve at 4:50 AM
Share