William John Lopez, better known as Sharpie to his friends in the East Village and in the hardcore community, recently died.
According to his parents, he was a victim of cyberbullying, and he took his own life. He was 18.
This past Saturday, his parents, Ronald and Jeanette Lopez, his sister Jenna and his fiance Sarah Fulton (left in the photo) spoke during a memorial before a free concert in Tompkins Square Park. 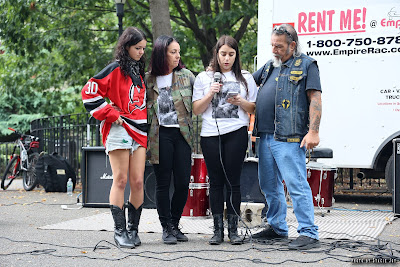 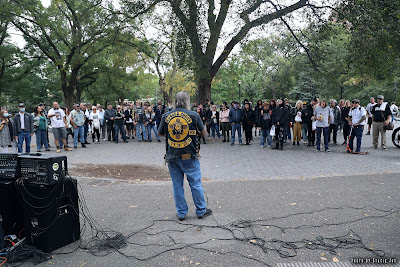 Here's part of an online tribute to Lopez, who was born and raised on Staten Island:

He was extremely talented and played the guitar and bass. William continually developed his artistic abilities all throughout his life and was a tattoo artist with the family-owned business. William traveled to London which heightened his interest in the punk scene.

He found a life in the hardcore music scene and enjoyed a bit of celebrity status on the Lower East Side as the heart of the mosh pit. He befriended and was accepted by those with addiction issues and was known to have saved at least 3 lives with Narcan.

He was a leader and wise beyond his years in many aspects. He was a kind and giving soul and always caring for others.

His family is hosting a celebration of his life on Oct. 17.
If you or someone you know is at risk of suicide, please call the National Suicide Prevention Lifeline at 800-273-8255, text TALK to 741741 or visit SpeakingOfSuicide.com/resources. STOMP Out Bullying is a nonprofit resource for kids and teens.
Grieve at 11:30 AM
Share