[Updated] The Green Bench is stolen from the TF in Tompkins Square Park; 'this shit is an act of WAR' 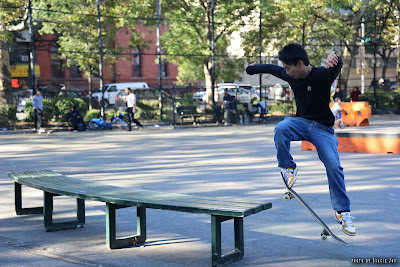 Photo from October 2021 by Stacie Joy
Updated
Since our original post, several other media outlets jumped on the story. (A solid piece from Vice here.) There's now an AVE Bench Instagram account (and several copycats). As for the bench, after the excursion to Philadelphia, it was last spotted in Richmond, Va. Then, on Sept. 25, pro skater Mark Appleyard posted a clip with it from an unknown location... with a RUMOR that it crossed the border to Canada.
-----
Tensions are mounting in a cross-border conflict following the brazen theft of the green bench (aka AVE bench) from the TF in Tompkins Square Park last week.
The bench was last seen Wednesday night... as the @tf_report account reported... 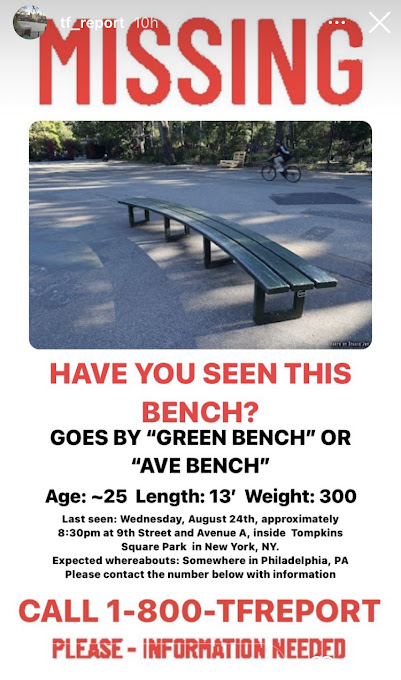 They later learned the following:
"Some reports have said the green bench was stolen from Tompkins around 2am on early Thursday morning, to which it was carried into a van by several unidentified men and transported across state lines to Philadelphia, PA."
Follow-up clips in the @tf_report Stories noted brazen activity in and around Philadelphia... 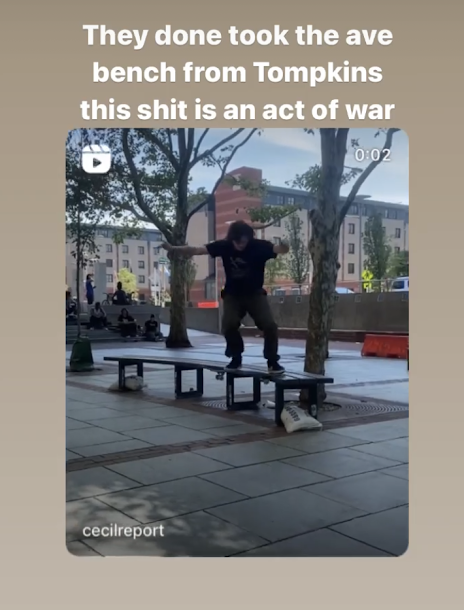 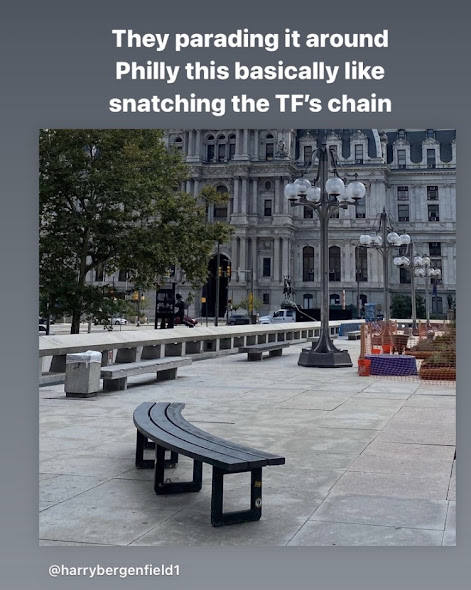 No word yet on the next move.
The bench first arrived in Tompkins last October... coinciding with the grand opening of FA — better-known as Fucking Awesome World Entertainment — at 420 E. Ninth St. between Avenue A and First Avenue. The skateboard company and streetwear brand is co-owned by pro skaters Jason Dill and AVE (aka Anthony Van Engelen).
Here's more about it via Curbed:

If you're a skateboarder — or a former skateboarder, or at least somewhat skateboarding-adjacent — and live in New York City, that sentence cannot be read without an exclamation point. The green bench! That's because this particular 300-pound piece of steel street furniture has become one of the most storied objects to skate around and on, and its arrival on the East Coast adds a coda to a two-decade saga of discovery, theft, loss, reconstruction, and a particularly hard-won switch backside noseblunt slide across its 13-foot arc.

And here's AVE's thoughts on its arrival here last fall:

"I hope it stays at Tompkins forever," he told Curbed. You might think (as the guys I talked to at FA did) that with the bench's history, there would be a serious security apparatus surrounding it at night. But according to AVE, the bench's future at Tompkins is being left to fate: It's just sitting out there for everyone to skate.