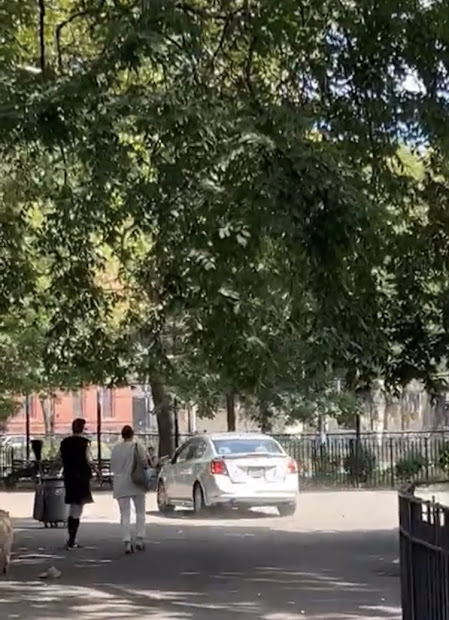 Updated with comment from the NYPD below.
We've received a 25-second video clip of the driver taking several laps in Tompkins Square Park on Sunday morning.
As previously reported, a man, possibly late 20s to early 30s, and a woman were seen arguing in the Park just before 11 a.m. Both the man and the woman are known to hang out near the chess tables in Tompkins.
According to witnesses, the man grabbed a shovel from a Parks maintenance truck and hit the woman multiple times. (It's not known the extent of her injuries.) One Park regular described this as "a crime of passion" to EVG contributor Stacie Joy. Per the regular: "I mean, she owed him money and whatever but like damn. A shovel?"
A group of men sitting nearby rushed to her defense and chased the shovel-wielding attacker from Tompkins.
Witnesses said the man returned in a few minutes driving a Nissan Sentra with Pennsylvania plates. (Our previous post has info about traffic citations associated with this vehicle.) He entered the Park, which was hosting the weekly Greenmarket, at Seventh Street and Avenue A, "going down different rows while everyone is diving out of the way," as one witness described it. Witnesses believe he was looking for the men who had confronted him.
The person who shared this video shot it from Temperance Fountain. The clip starts with the car slowing down (with the hazard lights flashing) before revving up and taking another lap.
Witness estimates put the driver in the Park between 1 and 2 minutes total. "Hard to describe how terrified people were for however short a time that was," one witness told us.
Before the man drove into Tompkins, he was seen — with a torn T-shirt and missing shoe — getting into the car with a woman who was also in the Park. (It's unclear if this was the same woman he allegedly hit with the shovel.) Witnesses said he drove the wrong way on St. Mark's Place toward First Avenue before turning around and making a right onto Avenue A, where he went in circles under the traffic light at Seventh Street before entering the Park.
The NYPD arrived (along with a truck from FDNY Engine 5 on 14th Street) after the man had driven through Tompkins. He was stopped on Avenue A near St. Mark's Place. There's speculation the car broke down.
To the disbelief of some onlookers, the man was not charged and walked away after spending some time talking with officers from the 9th Precinct. According to a resident who watched the police on the scene on Avenue A and St. Mark's Place: "One thing I noticed was that the police didn't seem interested in witness accounts."
We've talked with witnesses who saw the man allegedly hit the woman with the shovel... drive the car up St. Mark's Place and along Avenue A before entering the Park... and maneuver his way through the Park. No one we spoke with saw the entire incident from beginning to end.
Witnesses described a confusing, chaotic and scary few minutes in the Park. Witnesses who saw any part of this unfold said that there were amazed no one was injured and shocked that the driver wasn't arrested.
As of last evening, the car was still sitting on Avenue A at St. Mark's Place... 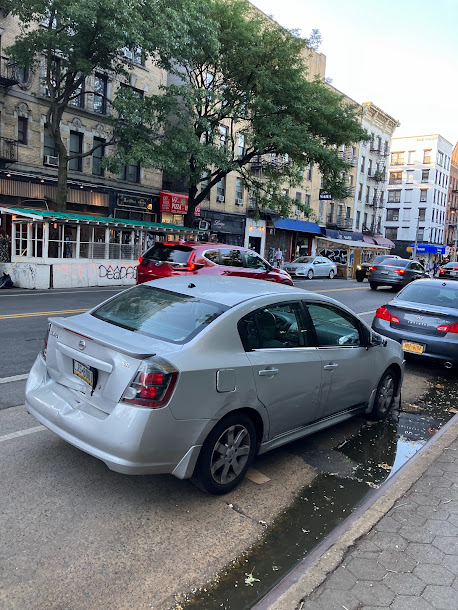 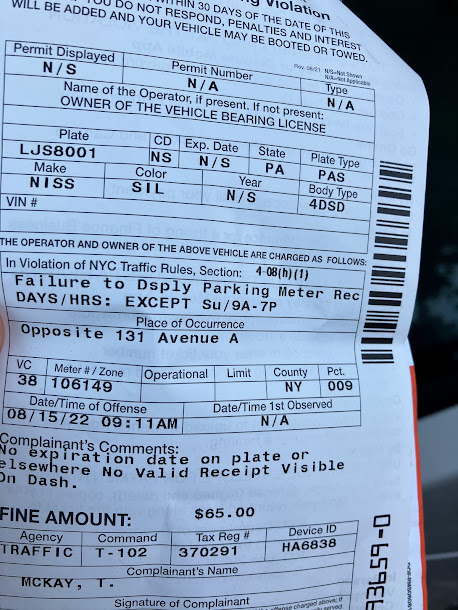 ... for "failure to display parking meter receipt" and "no expiration date on plate or elsewhere." Fine amount: $65.
Updated 8 p.m.
EVG contributor Stacie Joy asked a source at the 9th Precinct for a comment on what happened in Tompkins Square Park on Sunday morning.
"The event in the Park was a result of a dispute between the car owner, who was with his female friend, and another group of men who robbed the car owner. The car owner tried to get back his belongings from the robbers but he was jumped ... The robbers chased him with a shovel and in the process, he got into the car to run away from them. He proceeded to drive into the Park — not knowing it is a Park because he is not from the neighborhood," the source said. "So far the owner of the car and his girlfriend were the victim of a crime and the complaint is still being worked on by the detectives. So there is still an ongoing investigation."
The current NYPD storyline is at odds with what multiple residents said they saw transpire. According to several witnesses, the driver of the car allegedly hit his girlfriend with a shovel before a group of men intervened. Witnesses said they also have seen the man in the Park on several occasions.
Grieve at 5:30 AM
Share