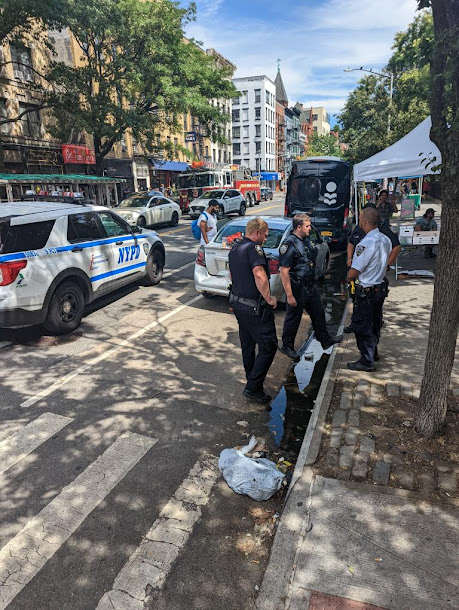 Reader-submitted photo
Updated 8/16: We posted a video of the car in the Park here. Updated with comment from the NYPD below.
--
An EVG reader described a chaotic and frightening few minutes this morning in Tompkins Square Park just before 11.
The reader was sitting in a car on Seventh Street between Avenue A and Avenue B. Inside the Park, just past the recently barricaded chess tables, a sanitation truck from the Parks Department was stopped while workers were collecting trash.
According to the reader, a man grabbed one of the shovels off the back of the truck "and started beating a woman who was sitting on the bench screaming 'don't tell me how to handle my woman.'"
Several men sitting nearby jumped to the woman's defense, chasing away the attacker. Moments later, the man entered the Park in a car — "a gray/silver sedan, maybe a Nissan" — at the entrance to Seventh Street and Avenue A, "going down different rows while everyone is diving out of the way."
Another EVG reader told us this: "He drove into the Park right in front of me across from Niagara. He was moving fast."
The first reader said the car made a few passes up and down the rows of benches and weaved around Temperance Fountain before exiting again on Seventh and A. The vehicle eventually stopped on Avenue A near St. Mark's Place. There's speculation that the car broke down. 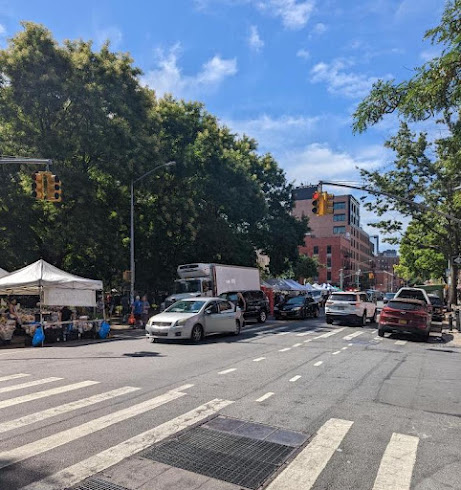 It's not immediately clear if the man was arrested. The second EVG reader said police let the man walk away. There are no further details available at this time.
Thankfully, despite a busy Park day with the Greenmarket set up along Avenue A, there weren't any reports of injuries. (We don't know the condition of the woman who was hit with the shovel. Witnesses said an ambulance was in the Park.)
"I have no idea how no one was hurt, but it seems like everyone was OK," the first reader said.
Updated 6 p.m.
Writer Jeremiah Moss has an account of the incident on Instagram. He wrote in part:

I was walking in Tompkins Square this morning when a man drove his car through the park, narrowly missing people, going after the men who'd just beat him up. People fled. Witnesses said the man got beat up because he was beating a woman with a shovel, so hard the shovel head broke off the handle. Other witnesses said he beat the woman with the shovel because she stole from him. The cops talked to the man, and when they didn't arrest him, witnesses were outraged. One man on a bike, who'd nearly been run over, went to the man with the car and got an apology from him — they shook hands and made up. "That's the code," said the man on the bike, meaning the code of the street.

Updated 8/15, 12:06 a.m.
From a reader... the car that witnesses said was used to drive through the Park was still parked on Avenue A last night... 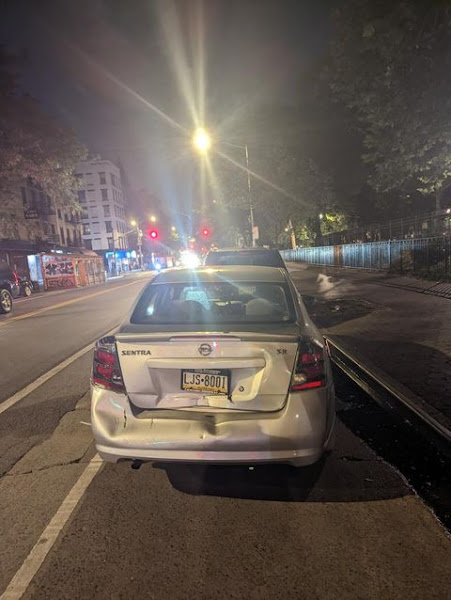 According to @HowsMyDrivingNY, the Pennsylvania plate has a total of 10 parking and camera violation tickets — all issued in the Bronx in 2020 — that resulted in $1,264.03 in fines.
2 | Bus Lane Violation 1 | Blocking Crosswalk
1 | School Zone Speed Camera Violation
1 | Front Or Back Plate Missing
1 | No Standing - Day/Time Limits
1 | No Parking - Day/Time Limits
1 | No Parking - Street Cleaning
1 | No Standing - Bus Stop
1 | Double Parking
Updated 8/16 8 p.m.
EVG contributor Stacie Joy asked a source at the 9th Precinct for a comment on what happened in Tompkins Square Park on Sunday morning.
"The event in the Park was a result of a dispute between the car owner, who was with his female friend, and another group of men who robbed the car owner. The car owner tried to get back his belongings from the robbers but he was jumped ... The robbers chased him with a shovel and in the process, he got into the car to run away from them. He proceeded to drive into the Park — not knowing it is a Park because he is not from the neighborhood," the source said. "So far the owner of the car and his girlfriend were the victim of a crime and the complaint is still being worked on by the detectives. So there is still an ongoing investigation."
The current NYPD storyline is at odds with what multiple residents said they saw transpire. According to several witnesses, the driver of the car allegedly hit his girlfriend with a shovel before a group of men intervened. Witnesses said they also have seen the man in the Park on several occasions.
Posted by Grieve at 2:30 PM

“It's not immediately clear if the man was arrested. The second EVG reader said police let the man walk away.”

This has to be a joke. If true, what a pathetic, useless city government we have. Wow.

We were at the farmers market, at stalls fronting Ave A & heard a commotion. There was a group of 10-15 people fighting near a trash truck, which was pulled up near the chess tables & at least one person had a shovel and was striking people. After a few minutes, one man was pushed from the crowd & ran out. He shouted - I just want to get my water (or similar) and the crowd was yelling at him to get out. A moment later, he was driving through the park, fast, and exited on Ave A.

Why did the police let him walk?

The person in the picture with the ripped shirt was the one who attacked the woman and drove the car through TSP. Not even handcuffed.

Thank goodness I went to the farmers market in TSP at noon instead of just before 11am when this happened. Us senior citizens cannot easily jump out of the way of a car trying to mow down pedestrians in park walkways, nor should we have to. I don't understand why the police didn't take him into custody. Someone could have easily been killed.

I wonder if he's busy deciding which suit to wear when he makes a statement about this incident.

Why would someone who beat a woman with a SHOVEL and then drive through a park not get arrested?!?! Normally I don't think cops should be included but every time someone is beating someone else with a shovel I think, "gee, this has gotten out of hand." My God they are so useless. I really hope that woman is okay.

What's the problem? Since nobody was injured this is a non violent crime. It's a misdemeanor at most. You get an appearance ticket. Now everyone is law and order?

I thought domestic violence was a mandatory arrest. I also think attempted assault with a deadly weapon [car] was another charge that should have been applied.

“Nobody was injured”?!!!! He beat a woman with a shovel. Believe it or not, women are human too.

The cops not doing their jobs isn't woke anything.

I suppose the fact he didn't kill anyone makes this a reasonably tolerable action in Mayor Adams' NYC.

Didn't even take him down to the station to suss out what happened?? this is so headshakingly unbelievable really NYPD nothing for this there's gotta be more to this man this sends a bad message on so many levels

If there were more parking spots this would never had happened.

He yelled " I just want to get my Wallet." Aftereards he told the police he got jumped by 10 crackheads and came back looking for his cell phone and Wallet ( and shoe)

Is the lack of arrests an upstream issue, that courts are so backed up from lockdown closures that there's been a slowdown to prevent adding more to that glut? I'm not saying it's right, genuinely asking. Does anyone here know? The entire system is in disarray.

I was there. It is truly a miracle that no one was killed - he was racing the car through the crowded farmers market and park. People were literally dodging the car as it speed around - it was extremely reckless. I feared he'd drive into a crowd.

Reading is though for some, huh Peter?

No point of arresting him, thanks to bail reform he'll be back out on the streets tomorrow.

I’m sorry, they LET HIM WALK?!

I was there. They're dramatizing the car thing a bit, he was going slow but is clearly a nut. The shovel things is the scary part. I don't understand the not arresting thing? But maybe that reporting is wrong?

PS: Whose CAR was he driving? And why wasn't the car impounded?

Exactly. The arresting officers will be drowning in paperwork for 6+ hours which takes them off the street, while the offender will be released way before the paperwork is done. So by arresting the guy, it’ll effectively take the cops off the street for a longer period, thus making the area less safe. It’s a joke.

It’s the DA, Alvin Bragg. Cops’ hands are tied cause he isn’t prosecuting any theft or assault cases. It has to be something egregious, and even then, it’s not a guarantee the city will look to pursue charges.

If even the confused citizens of San Francisco can get rid of their DA, then so can NYC. It's time.

@6:45pm: IMO, Bragg is the single biggest impediment to any kind of rational policing or law enforcement in NYC at this point.

He'd be a joke (and note how he's ALWAYS smiling, like "Hey, I got mine, and the rest of you can go scratch!") except for the fact that the quality of life in NYC is seriously going downhill ever faster b/c the so-called DA isn't *interested* in doing even the tiniest bit of his job.

Bragg and Adams are both losers. Please THINK about that when you vote in the PRIMARY this month (yes, please bestir yourself to get your ass to your polling place and VOTE FOR BETTER PEOPLE).

I suggest that people who cannot believe this man was not arrested call the 9th Pct. , especially witnesses , and ask for the Commanding Officer and ask them why no arrest was made. Perhaps this man has connections to the NYPD or City that we don't know about ?

“ Reading is though for some, huh Peter?”

…and spelling is TOUGH for some, huh anonymous.

I tried calling a few weeks ago during a weekday afternoon after seeing a person nearly get hit with a golf ball because some thoughtless adult kids were playing minigolf off the roof on E 12.

NO answer. NO one picks up the phone.

@9:15am: It's been many years since I've been able to phone the 9th pct. and actually have a human being answer. They seem to have avoidance-of-citizens honed to a fine art.