Residents come together to pick up trash around Tompkins Square Park 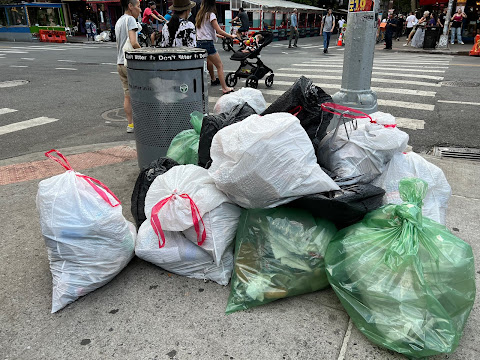 Photos by Allie Ryan
More than 30 residents (and one rat and one superhero) turned out late yesterday afternoon to help pick up litter around Tompkins Square Park. 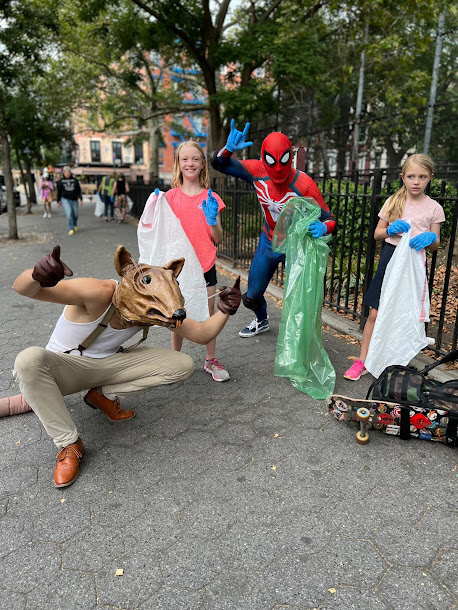 As previously reported, Jonothon Lyons, creator of Buddy the Rat, and NYC entrepreneur Michael Quinn launched a community litter clean initiative called "Buddy's Brigade: Litter Exterminators."
Quinn reported that they picked up a few volunteers along the way. "Some were inspired to join after watching us parade around the park," he said. "A few children walked over from the playground to pitch in."
He added: "I never thought picking up litter could be so much fun."
EV resident Allie Ryan, who took part and shared these photos, noted in a tweet: "Now we need someone trained in needle pick up to come." 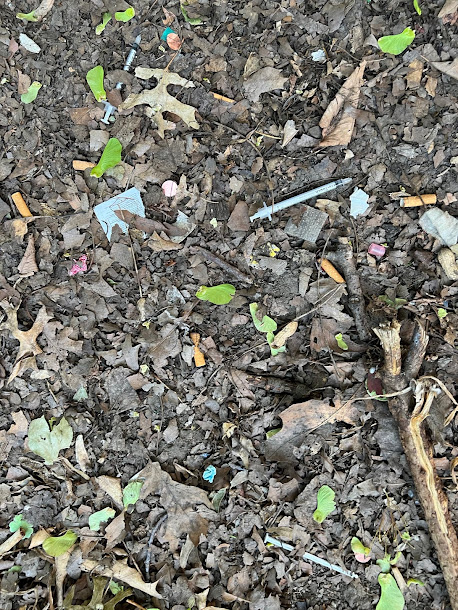 Assemblymember Harvey Epstein's office has a volunteer trash pickup planned for Sunday at 10 a.m. Interested residents can meet at Seventh Street and Avenue A. (We'll post updates when more info is available,)
East Village residents have said that essential maintenance of Tompkins Square Park has declined in recent years.
Posted by Grieve at 8:28 AM

They quit maintaining it when the pandemic hit and De Blasio fired all the parks people. Do you think “small government, except for cops” Adams will change that?

Epstein and Rivera only care about the neighborhood during election season.

This neighborhood is affluent NYU students and upper middle class adults. Someone has to be able to organize some money to bribe the city parks department.

The picture of that girl's face on the right is priceless!

It’s time to elect people who have a track record of helping people in our area. If Dan Goldman was smart he would be running on quality of life issues which are horrendous in parts of lower Manhattan. Instead he is reversing his multiple flubbed positions on abortion and opposes Medicare for all, showing how out of touch he is. He even aired has TV ads filmed in his million dollar west side condo. Meanwhile Mondaire Jones is running tons of ads and is mercilessly attacking Dan Goldman for being endorsed by Donald Trump, but Mondaire is another carpetbagger without much of a chance. It looks like the race is between Carlina Rivera and Yuh-Line Niou who are still focused on local quality of life issues in lower Manhattan as they have always been. Early voting is open now, so go vote for a candidate who actually cares about issues like this, and who actually lives here.

@ Giovanni . You are incorrect regarding carpet baggers. The only candidate living outside the district is Rivera. Goldman lives in Tribeca. Jones in Carol Gardens

The only quality of life Carlina Rivera is concerned about is her own.

According to one frequent commentor on this blog they should have left the trash where it was. Community spirt be dammed.

Is there any plan w the parks dept to get park employees to actually clean instead of children?

Honest question, did they not have a biohazard bin and pickup process for the needles? That was available the last time I did a clean up and should definitely be part of any one!

I stand by my comment that Mondaire Jones is a carpetbagger. He has been representing Rockland County and part of Westchester, and only relocated to Brooklyn in early June after deciding to take his chances running for the newly reconfigured 10th Congressional District. If that isn’t a carpetbagger I don't know what is.

As for Dan Goldman, the issue is he’s not a local, he’s a Wall Street guy with a $250 million net worth as an heir to the Levi Strauss fortune. Ironically his father was named Goldman and mother was named Sachs, and he has a $50 million line of credit with Goldman Sachs. Born in Washington, D.C. educated at Yale and Stanford, he. is not what anyone would call a local since he has no roots in NYC, nor has he ever done anything for the city or our neighborhood while Carlina Rivera and Yuh-Line Niou have spent their careers helping minorities, especially Latinos and Asians with their daily issues. Goldman is a career attorney looking for a stepping stone, either to the Senate or to Albany as Attorney General or Governor, and he and his Wall Street buddies think he can buy his way there. Assuming we get out and vote, he will soon find out that the answer is that he cannot.

I was part of the cleanup, and that 30 person number is highly inflated. It was no more than maybe 15. The whole gog seemed to just be a social media opp for the Rat guy - all he did was walk around in “rat form” being filmed. Undeterred, I was able to collect a whole bag of trash (including needles) but hardly made a dent I feel. Let’s face it: the real culprits of the trash are the homeless. Until changes to help homeless are made on high, the trash will be ever-present.

Carlina is my council member and I wish I could say she cared about our quality of life here, but I’ve given up on her. Still undecided, but not her. And back to the garbage issue — shocked that all those needles were meant to be picked up by the neighborhood volunteers. There needs to be more care over what we are asked to do.

All you anonymous posters - where are your statistics and your reasons for your put-downs?
For instance, Giovanni has those. Read his posts for guidance in how to make meaningful arguments.
As they stand, the put-downs in this stack don't stand up as any more than cocktail comments.

Anyone organizing clean-up in the park should provide sharps boxes along with other equipment--you can buy them on Amazon, relatively inexpensively. Here are directions for safe disposal: https://www.mass.gov/doc/syringe-safety-for-non-healthcare-workers/download

But, honestly, it's a lot to ask of one-time, untrained volunteers.

I took part in the clean up - Thank you for the link to the proper disposal of needles AND what to do if poked. I have screenshot’d it as there is great preemptive information, as well as “after getting needlestick” INFO - my daughters participated, they went w/the plan to participate, (not impulsively joining in as Buddy the Rat thought). They are well versed in not touching any needles of other paraphernalia they unfortunately have to encounter ( including little colored containers w/trace contents of drugs we caught them collecting as toy cups for their figurines when younger ).
These are the realities of parenting in an age of minimal services, outright neglect, and stereotypical politicians - out for their own good. These election times show how effective they are when they want to be, at shoveling buckets of money to cronies for empty endorsements. Thank you EVgrieve for covering and therefor promoting this event. Just as it takes a small percentage of people to create this trash, if only a small percentage get organized and make an effort and keep the sense of community alive, we can get back to being a place safe for growing up. The average citizens appreciate the effort ( we got SO many thank you’s ) -the participants were quite happy with their results, and the willfully blind, just visiting, and beaten down cynics will benefit and their behaviors may be positively affected.

FUTURE- I would hope professionals will eventually be brought back and we won’t have to consider continuing this as a community service - but we’ll see after the election.

Excellent comment! Thanks for taking one for the team - it is gratefully appreciated.
- Beaten-down Cynic