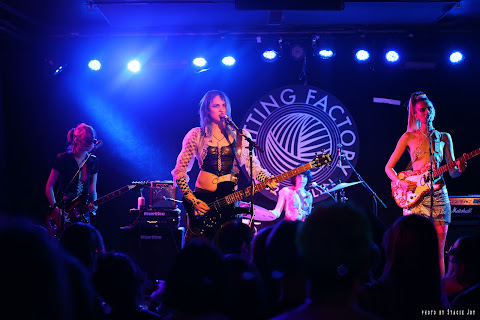 Photo of cumgirl8 at the Knitting Factory Brooklyn from 10/21 by Stacie Joy
After 13 years of hosting live music and comedy on Metropolitan Avenue in Brooklyn, the Knitting Factory shut down on Sunday night.
In the Instagram post announcing the live music venue's closure in June, the company ended with: "Don’t fret, you'll see us again in the coming months." (Management said the landlord wanted to double the rent in Williamsburg.)
Multiple tipsters have told us that the Knitting Factory would be opening a concept in the East Village in the months ahead. Morgan Margolis, president and CEO of Knitting Factory Entertainment, confirmed to EVG that the Knitting Factory will be coming to the neighborhood.
However, Margolis, who was born and raised in the East Village, was not ready to reveal where just yet, stating that an announcement would be coming later this fall.
In June, he told Brooklyn Magazine that the next iteration is "going to be a little different in that it's going to be more of a neighborhood bar … we're partnering up, so it's not just going to be Knitting Factory."
Michael Dorf and Louis Spitzer opened the original Knitting Factory in 1987 on Houston Street near Mulberry. The venue decamped for Tribeca before moving to Brooklyn in 2009. (Read more detailed history here.)
Today, the Knitting Factory's operations include venue ownership and management, festivals and events, artist management, recorded music production, and distribution.
Posted by Grieve at 5:05 AM

Never been to the Houston location, but the Tribeca one was fabulous. Had great musical adventures there. Williamsburg one was just okay. We went there basically twice a year, for Legendary Pink Dots and for Acid Mothers Temple.

Met James Doohan at the Houston Street location many years ago. He was emceeing an avant garde bagpipe festival there. Very amiable, as long as you didn’t ask questions about Star Trek. Also first saw Ashley MacIsaac that night, looking very young but way cool in Docs and a kilt. Good times and great set-up, with a space to talk downstairs and a space to listen and look upstairs. It’d be great to have them back.

The empty swath of space on Stuyvesant St at 3rd Ave (RIP Panya) could be a possible location.

I remember the Houston St location fondly, so this feels like it's coming back full circle. Let the location speculation begin!

How about the old Pyramid Club space?

The Knit Factory is coming back??.......Oh,no this can't be. Must be fake news. Doesn't everybody know the East Village, in fact all of Downtown, has been DEAD for years and years??.......It a dirty, filthy, scummy mess overrun with Bros, Whoo-hoo girls and GIANT Rats!!!.....Besides which the grumps and old farts are going be apoplectic when they get wind of this !!..........and if true is this really needed??.....LOUD MUSIC, young punks and dancing girls drinking, smoking weed, and having FUN !?.......Who is responsible for this OUTRAGE??

Wasn't that said before that Pyramid was the target?

Hard to believe rent would be cheaper in Manhattan but maybe this is a sign the real estate crash has begun if rock n roll can return to Manhattan.

I can verify that the Pyramid is the candidate, ummmm.

Nice unexpected win for the neighborhood!

Huge get if true

Yes!!! This is so great. I wonder if they’ll take over Sidewalk’s old space?

Zum Schneider is sadly likely never returning to the LES, if it does at all. They are however hosting their Oktoberfest at 3 Dollar Bill’s giant yard in Bushwick 9/30-10/9

That’s what I was thinking too!

Must be moving into Katz's

Knitting Factory always belonged in Manhattan. The Brooklyn location just seemed off, never felt right. Though the glory days of the Houston and Leonard Street locations are long gone, glad to see them returning to their roots.

Oooh what about the old UCB space???