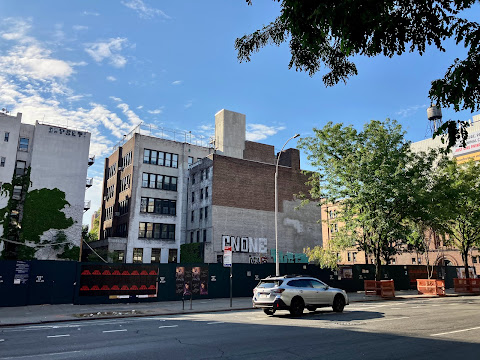 The rendering has arrived on the plywood along Second Avenue between Second Street and Third Street... offering the first look at the 11-floor mixed-use building that will rise on the east side of the avenue... brace! 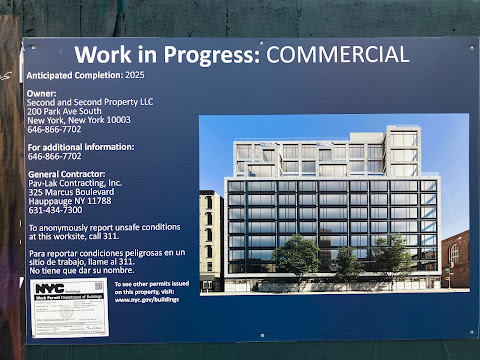 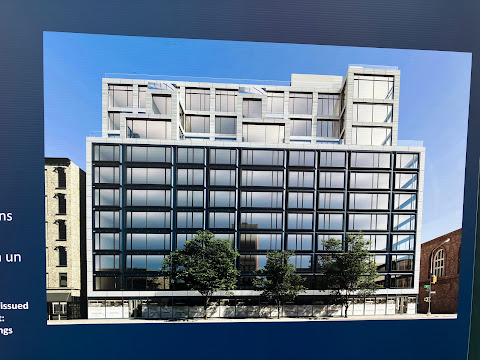 As previously reported, Gemini Rosemont Development is behind this 100,568-square-foot new building ... the development, using 42 E. Second St. for its address, will feature 88 residential units (likely condos given the square footage) and 9,600 square feet for retail.
In 2020, Gemini Rosemont bought the former La Salle annex at 38 Second Ave. and Second Street. The $14.5 million purchase of the four-story building was the third of three contiguous plots that they acquired. The Los Angeles-based commercial real-estate investment company closed on 42-44 Second Ave. and 46-48 Second Ave. (the former Church of the Nativity) in March 2020 for $40 million. 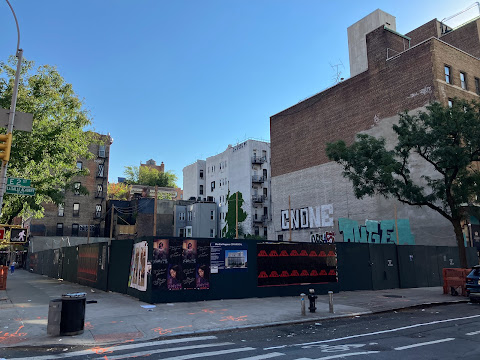 The rendering lists a 2025 completion date.
Posted by Grieve at 5:30 AM

Keep an eye out for the damage this developer causes to the neighboring buildings. Stop work orders for safety more than once.

Somebody went to architecture school to design that?!

Holy Christ. Seriously? To riff off Anon. 8:49, somebody got paid to design that?

NYC needs more housing. This is good. If we build more housing the prices will come down. Simple supply and demand.

Agree with 9:20 above - do we know if the legislation to require bird-safe construction is enacted here?

When the Avalon buildings went up, I noted that those corners now look like Anywhere USA and it's easy to lose one's bearings. It used to be I knew exactly where I was in this city, but with ugly generic glass buildings on every corner, everything looks the same and it's easy to get lost.

And I'm sure it's climate-friendly to heat & air-condition!

BTW, @9:48am, I'm going to presume you did not major in economics. "Simple supply and demand." you say. To which I say: LOL, sure, that works as advertised every single time in NYC.

No. REBNY say what?

"The incontrovertible evidence that simply building massive amounts of market rate housing does not make cities more affordable — and may make them more expensive and push out lower-income residents — continues to mount. But proponents of this theory inside and outside of government continue to buy into and spread this damaging misinformation, and push for policies built around this highly flawed approach."

More housing for the insanely rich ….

I wasn't aware until now that Frigidaire had branched out into architectural design.

Nobody should be surprised by this. Neighborhood organizations tried to convince the Catholic Church to allow affordable housing to be built on this site, but the Church was determined to go for the money that a luxury developer offered instead.

Not beautiful not hideous, but anything is better than the repression and mental slavery that a religious institution represents. Btw, In terms of tax free real estate holdings the Catholic Church makes NYU look a pack of lily white alter boys.

These ugly structures create jobs at the Windex factory.

Nice. We need more modern buildings that are energy efficient, not the terrible building stock that people are so sentimental about.

It would be okay if it was ugly if it were affordable housing. (Well, not *okay*, but tolerable.) A handful of luxury condos won't help the neighborhood or the city.

@ 3:52 PM
Nice try, troll.
This will absolutely consume more energy, on whole, than what was there previously.

Can we start a petition, or maybe just a polite letter, asking them to please design a less ugly building?

It’s what the market wants I suppose. Never heard anyone say “Oh I want to live in one of the iconic EV tenements with one window.” I’d love to live in a loft with floor to ceiling windows but obviously these will be only vaguely loft inspired. Also think it’s fine to build modern glass whatever type buildings but these massive buildings just don’t work. It’s disruptive to the naturally small scale of the east village and the massive retail/restaurant spaces almost always sit vacant in them. Would love to see a neighborhood ordinance that requires new construction to at least have the facade give the illusion of several smaller buildings.

At first look, and second, and third, it is ugly. It is terrible when ugly buildings are built in the City. Part of the wonder of the place are the buildings. What else can it be but great buildings? I can think of people I have corresponded with with their offices on Park Ave.

The idea that someone would even argue that housing supply doesn't affect housing demand is crazytown. Obviously adding more housing puts downward pressure on housing costs. This project is a great thing, BTW. Replacing a hideous, long-abandoned church for desperately needed housing and retail space. Of course the neighborhood NIMBYs don't like it; they're the primary reason we have a housing shortage.

"Never heard anyone say 'Oh I want to live in one of the iconic EV tenements with one window.' ”

Speak for yourself! I don't know any tenements with just one window, but I grew up fantasizing about living in a beautiful 19th century brick building as we have here on the LES as well as all over the city. The word 'tenement' is used to imply something classist and negative. These old buildings, if maintained right, will all outlive the cheap modern glass boxes that leak and deteriorate before they're even finished (see 1st Ave next to Rite Aid). Their architectural details are works of art, showcasing skills we almost never see in new construction.

I have to laugh at those who claim we desperately need housing in defense of these new luxury towers. Yes, we do, but for whom? You think more luxe condos will provide housing for a working family? Show me where this has ever happened.

Yes housing is great and a surplus is needed to put downward pressure on.
Still that thing is ugly.

I’m not talking about beautiful turn off the century buildings.. I too love those and have lived in them my entire adult life. I’m talking about the cheaply built brick boxes that are plentiful in LES (yes they made cheap ugly “boxes” with no character in 1910 too). Their street scapes are iconic but the interiors are often not.