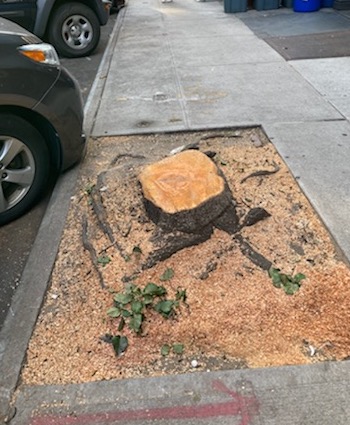 A stump is all that's left of a 50-plus-year-old flowering Callery pear tree outside 339 E. Fifth St. between First Avenue and Second Avenue.
According to a member of the East Fifth St. Block Association Tree Committee, the group hired (at a cost of $500) an arborist who pruned the tree — with the approval of the New York City Department of Parks & Recreation... "cutting off worrisome branches to maintain safety."
Several weeks later this past Thursday, "a crew from the Parks Department arrived early in the morning and chopped the tree down before anyone was up to notice," a tree committee rep told us.
"As it is, the Parks Department has turned the previously lush old trees on Fifth Street — watered, fertilized and tended to by our tree committee — between Cooper Square and First Avenue into grotesque Edward Gorey-like silhouettes by their over pruning. We are devastated," the committee member said. "Our arborist told us that weakens the trees and will shorten their life span."
The city hasn't shown much passion or sympathy for local trees in recent months.
Photo courtesy of the East Fifth St. Block Association Tree Committee
Posted by Grieve at 5:03 AM

"Visualise a 100 year old beech, almost 20 metres high and with a treetop diameter of 12 metres...."
"If the tree is chopped down, because it must give way for a new road or someone has complained about the shade from the tree or just because the space is needed for a new shed, one would have to plant some 2,000 new trees, each with a tree top volume of 1 cubic metre in order to compensate fully for the loss of the tree. The cost of this would amount to roughly $150,000."
https://citygreen.com/how-much-is-one-mature-tree-worth/

Walking on 10th street next to the park is a constant reminder of how parks department has little care for trees: trees were cut down years ago and were never replaced. Nobody cares. Not Carlina Rivera for sure

There is a lot of cutting down in the city and no replacement. Is this how NY is fitting climate change?

This makes me so sad, especially when it didn't seem necessary to do. And East River Park, let us never forget.

This no doubt explains the lopping-off of a few trees on the south side of E 3RD between A and 1ST. They are cut off near the soil line, just like the 5TH ST example photo in this post.
This technique (as opposed to excavating the root system as well) makes removal quick but dramatically complicates replacement of the tree.
These are concrete tree pits. What else would go there?
Wait, don't answer that.

This made me so upset when I saw it yesterday. It was the shadiest tree on that sidewalk and provided a roost for countless birds. This block used to have several pear trees and now I believe they're all gone. I'm livid that in this age of climate catastrophe, the city would do this.

I noticed a large branch of the Krishna tree in Tompkins was also removed, coincidentally in time for the jazz festival where it may have blocked the view of the stage.

The NYC Parks Dept is a JOKE! I agree with every post above, they have no regard for trees , shade etc. And the sad thing is the so-called Parks dept has no regrets, does not care at all and will continue to do this sneak attack cut down in the future -

I don't understand this town. The city goes through all the trouble to create tree pits, plant trees - and then just let them fend for themselves. It would be so much more cost effective to empower groups to tend to, and care for these trees, if the city would somehow offer the tools, guidance and necessary supplies to allow the folks who really care, to do so.

No. Their solution is to trim them back to the point that it causes massive stress their systems, thus allowing opportune insects and diseases the advantage. Then, when the city judges it as "useless", just cut it down.

The whole world try to plant more trees, this city is cutting them down. Where's the Bloomberg one million trees program?

5th btwn 1st & Cooper is blessed - best trees in the neighborhood. Thank you Janne and the tree committee for all you have done in the last 40 years. Not only are the trees lush and stunning, they serve us in innumerable ways by providing respite in the heat & filtering the air we breathe.

Friends, neighbors, let’s be clear: trees would NEVER get this kind of gross mistreatment in “wealthier” neighborhoods—this is a class issue with the city, just as East River Park is. We know that tree canopies are sustained in some areas, and that they lower street temperatures. So we need to keep fighting for green, and elect representatives that will fight on our behalf (which Carlina Rivera has absolutely not).

This is happening everywhere.

My corner has lost 4 newly planted trees in the past 6 years. We're on pair No. 3 now. I haul water by hand from my apartment to water them, but doubt I'll be able to save one of them.

Might as well close the Parks department because all they do is neglect and destroy. Maybe if someone could invent a car powered by the number of trees in the city, we’d have a nice department that cared about nurturing plant life instead of man- handling plant life.

Please add your request for a new tree near you

Hi all!! I am late to this conversation, but a few weeks ago (maybe three) I noticed outside the Vermeer Building and Westside Market on the Seventh Avenue side between 14th and 15th street (Eastside) that the trees were also cut down. No one had a response. Can I conjecture that this a cheaply stupid way of saving money? Any thoughts!!!!

@10am - you can become a super steward and perhaps have more of a say as to what happens to trees in your area. i am debating doing the same for my block:

THE CITY HAS BECOME THE WOODCHOPPERS BALL
THE CURRENT ADMINISTRATION IS OVLIVIOUS TO RESIDENTS!

"Do trees block 5G?"
https://www.quora.com/Do-trees-block-5G?share=1
"Trees with huge branches and dense leaves can block 5G signals due to the signal interruption by water contained in the plant. "

Gross. Because the human animal is officially expendable, after years of eradicating our other animals, time to revisit classic fiction/ non fiction texts and films. Post your favorites. I teach the classic Todd Haynes, Safe.

They cut down some trees a month ago on the Upper West Side without informing the area residents also.
https://www.westsiderag.com/2022/08/27/we-wouldve-strapped-ourselves-to-the-trees

@3:14 pm. Not sure what you mean by 5th St Park coalition situation. What kind of "situation" do they think those people have. That is just a small group of people that want to shut down a city project intended to provide affordable housing to low-income seniors. Their most recent claim is that the city will build "poorly designed" housing. Oddly enough, the city is the only possible builder (because this is city property) for what they claim they want -a parking garage and a park. I guess those will also be "poorly designed."

To put this puzzling tree cutting into perspective, consider thus article about the wealth divide: https://www.theguardian.com/us-news/2022/sep/07/new-york-heat-deaths-map-inequality