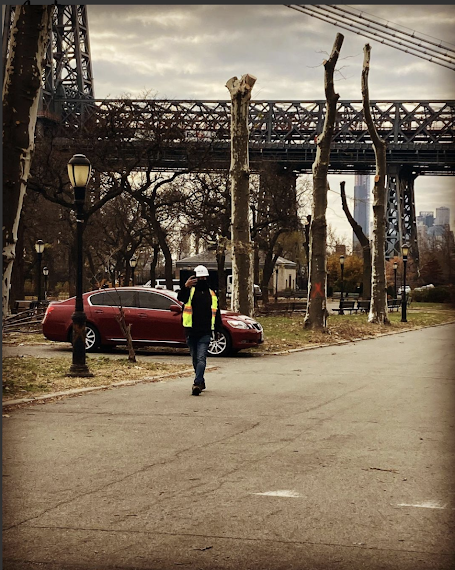 On Wednesday, Court of Appeals Judge Rowan Wilson issued a new Temporary Restraining Order (TRO), halting construction underway in East River Park as part of the $1.45 billion East Side Coastal Resiliency project.
According to East River Park Action, who has been opposed to the city's current plan for the park, the TRO remains in effect at least until the next hearing on Dec. 20.
However, despite the TRO, activists at the construction site just south of Houston Street report that city-contracted workers continue to cut down trees today. (There are also reports from people at the scene that police have arrested several of the activists.)

A post shared by Jeremiah Moss (aka Griffin) (@vanishingny)

Top photo by @jeremoss
Posted by Grieve at 1:00 PM

This is nauseating, depressing, and infuriating.

Shocking, and I don't use that word often. I wonder if the mainstream press will bury this story as deep as De Blasio will bury the park?

This is unbelievable how could the City just blatantly defy a court order? How can all the lawyers who work for the City in high level positions allow this to happen? I guess the City and the contracting company are just determined to cut down all those trees in the park as soon as possible. What a shame.

Total corruption to the 10th power!

I deeply hope de Blasio and his hench-people get ALL the karma they deserve for this horrible situation very, very quickly.

“Mass environmental destruction, known as ecocide, would become an
international crime similar to genocide and war crimes under a proposed
new legal definition.”

Come by the area (just south of Houston). It is good to have many eyes, and community support there to witness and to support the Park as this all unfolds. Frankly, it was very sad to see- felt like a crime scene. The greed and short-sightedness of our politicians is infuriating. The system is so corrupt that it doesn't even follow the lawful order (Temporary Restraining Order)of a Judge.

Someone should notify Chuck Schumer; that might actually get attention and action to preserve the trees.

Outrageous that the workers defied the court order to wait. Who's accountable? I weep for those trees. Ecocide, indeed. Democracy was fun...what awaits us now?

For a city that preaches wokeness and all the ancillary issues that resonate with the virtue signaling crowd, this is an absolute middle finger to the voters who put the corrupt money grubbing Democrats in power.