The end of the East River amphitheater 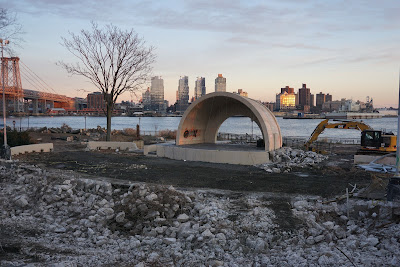 The demolition of East River Park below Stanton Street continues as part of the $1.45-billion East Side Coastal Resiliency Project (ESCR).
Social media posts show that workers have been focusing on the amphitheater in recent days.
"I saw some photos online of the amphitheater tragically getting gutted earlier this week, and I wanted to say goodbye before it was completely gone," EVG reader Shane Fleming told me in an email.
So yesterday around sunset, Shane went in for a closer look and shared the following photos. As you can see, the trees surrounding the amphitheater have been cut down, and the seats have also been removed. Only the bandshell remains for now.
"I spent many wonderful afternoons growing up at this amphitheater, and it's crushing to see it go like this," he said. 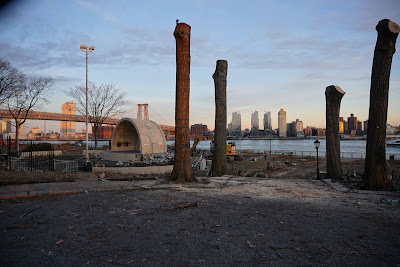 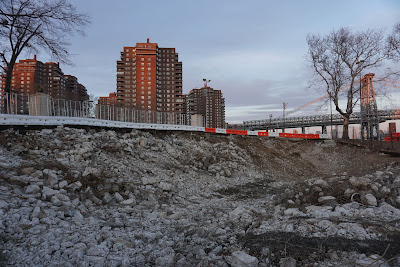 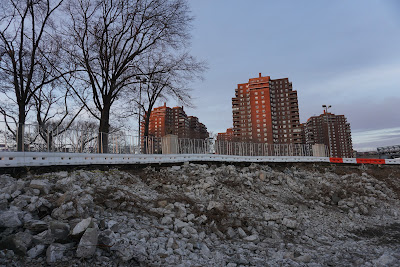 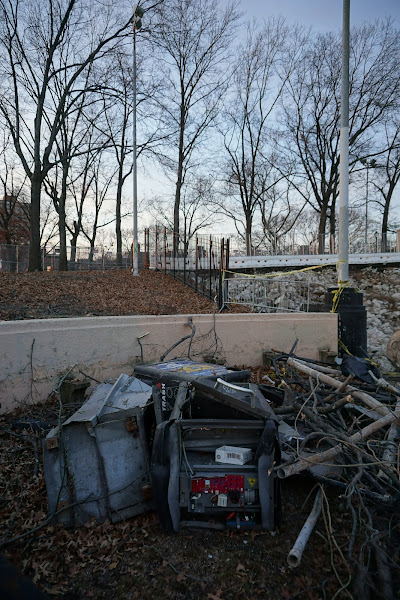 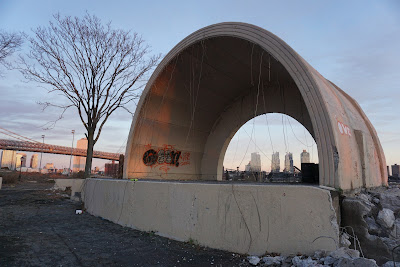 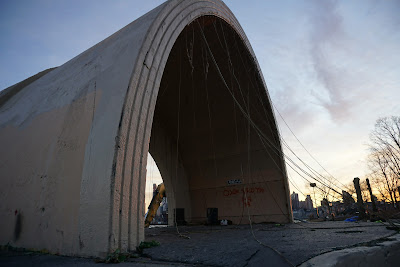 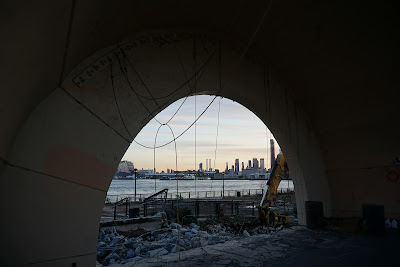 Here's some history of the amphitheater via the Parks Department website:

In 1941, an amphitheater was built in the park, along with an adjacent limestone recreational building, as part of an urban renewal project for the Lower East Side. During the 1950s, the amphitheater was the site of frequent free Evening-in-the-Park concerts. Joseph Papp (1921-1991), founder of Shakespeare in the Park and the Public Theater, staged Julius Caesar there in 1956. Local schools held their graduation ceremonies there, and the Group of Ancient Drama staged free-of-charge performances of classic Greek plays...

The city is to replace the existing structure with a smaller one at the exact location. (The currently gutted space could seat an estimated 2,500; based on the renderings, the new one looks to hold 400.) In June, the city came up with $4.83 million to include a roof over the new amphitheater.
The city has previously estimated that all work will be completed in East River Park by the end of 2026.
Our previous post has more about what's been happening with ESCR to date.
Posted by Grieve at 5:00 AM

In December 2001 in a publicity stunt, Erin Brockovich decided to restore the amplitheatre in one week as a part of reality TV show. This was done while Rudy Guiliani was mayor without any notice or input from the community-we were completely left out. When it was completed, there was a big opening party—but nobody from the neighborhood was invited. I believe there was a lawsuit after to make it accessible.

That amphitheater was a massively underutilized public asset. What’s happening is so, so depressing. That park has served on a real refuge for me for the past decade. Many, many days during the spring of 2020 when I felt like the only person alive in the city, with only the light traffic on the FDR to remind me that I wasn’t Omega man.

Disgusting abuse of power by the city. Who wants to move to a city that has a government so corrupt they ignore the people? There’s no hell, but if there was all the politicians in this city deserve to burn there.

I hope the Grinch shoves coal up the you-know-where on de Blasio and everyone who allowed this destruction.

I guess being on the LES we are not allowed to have anything nice. Nice stuff is only for the rich, it seems.

Seeing those grand trees with their arms shaved off is sickening. If only this park got the support and attention of Central Park. No one in the city outside of this neighborhood seems to care. City Hall doesn't care. I doubt the new mayor will care. My heart breaks.

People in these neighborhoods didn’t care until they actually closed it. People would shrug at the news prior to the closure. Fault is not only on the politicians but every citizen and dweller who is compliant with a rigged system.

When they finish there will be less of everything that the park offered.

Sigh. Thanks for the documentation, Shane.

So sad. The free Mountain Goats SummerStage show here in late summer 2019 was the last live concert I went to pre-pandemic. A good time was had by all, except the guy who brought his dog and clearly wasn't prepared to rock. And the lady who asked me, "Are these the Scapegoats?"

@12:44pm: Are you kidding me, or have you not followed ALL the news about this all this time? Do NOT EVER accuse people here of not caring or not getting involved, b/c you are wrong, wrong wrong about that.

the final stab in the heart of the current admin to the les breaks my heart that amphitheater where Wild Style was filmed and other great times should have gotten some kinda protection from the Mayors office oh wait what am i thinking ...... RIP East River Park Amphitheater

What a shame to see the East River Park Ampitheater demolished like that I used to go there regularly to see the NYC SummerStage programs where I saw great music and dancing shows put on there for free. Now who knows if that will ever happen again. This is a real loss for the people of the LES/EV.

Must be nice on your high horse. Fault is on the city, they failed us. The system is rigged-- you said it yourself. How dare you blame neighbors for not trying hard enough.

There are no words....
I want to say thank you to East River Park Action who fight teeth and claw for this. I wish I could have done more. I did what I could.
We fight for it. And, until last week I had still hope...

Being an avid cyclist and former commuter by bike East River Park has been my main route to get to Battery Park as well as to the Westside bike path. I've biked through this Park for almost 40 years. There are no great alternate routes. Now I'm forced to deal with more distract motorists increasing the danger to myself.

Let's get real here. Do you think this would happen on the westside of Manhattan which has more money and political representation.

Much of East River Park parallels public housing and lower income residents many are 'minorities.'

This is all about money and NYC corruption especially ineffective and indifferent pols.

There are no words....
I want to say thank you to East River Park Action who fight teeth and claw for this. I wish I could have done more. I did what I could.
We fight for it. And, until last week I had still hope...

There is still a community gather every day [7 days a week] in the park at 1 PM; coordinates are just below Houston Street at the FDR drive.

The M14D bus will take you right there.

I grew up in this neighborhood and I completely understand being upset about the trees being cut down, the reduced capacity for the amphitheater and the overall closures, but let’s not fool ourselves that this amphitheater was some architectural gem. It looks more like where an illegal arms deal in a bad 90s movie would take place. Like one of those Russian or Eastern European ghost towns that look like there used to be signs of life.

If the best show we come up with that performed here is the Mountain Goats then on principal we should bulldoze this thing. Again, I totally and wholeheartedly agree there are some terrible things happening here as a result of the overall construction, but this is not one of them.

You're absolutely right. New Yorkers (myself a native and included) neglected this historical site and took it for granted. I was just watching Wild Style and telling a friend if mine about it, decided to look it up and found out this horrible news.

So depressed now. Maybe Adams can be pressed to restore the original size?