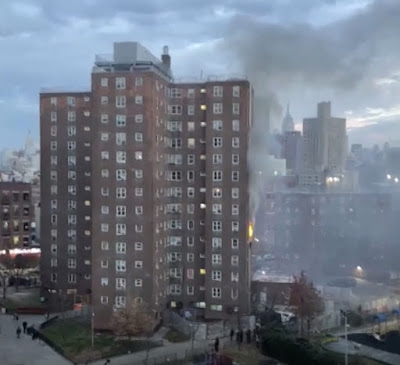 Top photo via the Citizen app
--UPDATED BELOW--
The FDNY is responding to a fire this morning at 118 Avenue D in the Jacob Riis Houses at Ninth Street, and there are early reports that one person has died.
As of 7:50 a.m., the fire, which started in an apartment on the fourth floor, appeared to be extinguished... 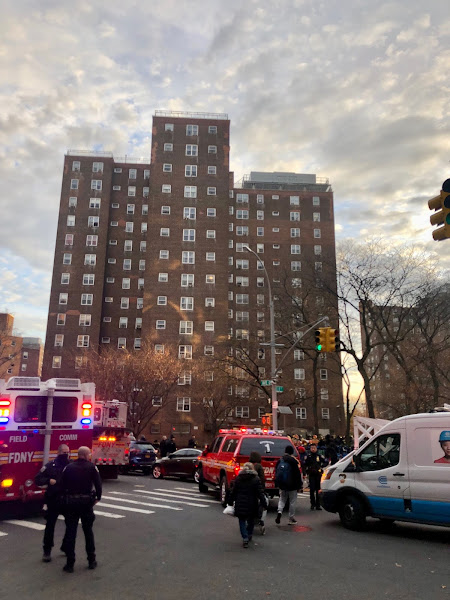 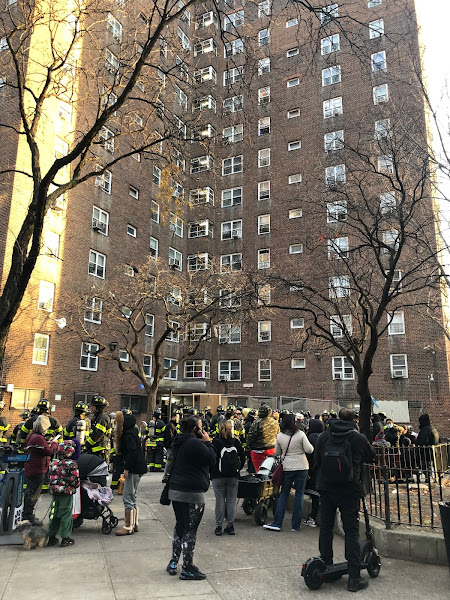 There is a massive FDNY response that stretches five blocks along Avenue D... A 32-year-old man was discovered dead in the apartment by firefighters.
A 46-year-old woman was taken to the Cornell burn unit at New York-Presbyterian Hospital in critical condition.
A 13-year-old boy and an 18-year-old woman were treated for smoke inhalation and burns after they climbed down exterior poles of the building to safety.
Four others suffered minor injuries.
Multiple electric bicycles were found in the fire apartment, and fire marshals are looking into the possibility that they sparked the fire.

There is a GoFundMe for the residents of the apartment where the fire started. Details here.

Instagram user @jay_staccss has dramatic footage of the two teens desperately trying to escape the fire.
Updated 11/18
According to published reports, an e-bike battery caused the deadly fire. There were seven e-bikes in the apartment, per CBS 2.
“These batteries, when they’re damaged or overcharged, release hydrogen gas, explode violently,” said FDNY Commissioner Daniel Nigro.
NY1 has coverage here.
Posted by Grieve at 8:00 AM

It was CRAZY there was smoke from that entire apartment that cover almost all of 9th street and 10th Street . Lucky two people escaped with climbing down the yellow pole next to their window . Sadly two died ☹️☹️

I heard the sirens just after I woke this am, this is so sad, my sympathy to friends and family.

A terrible tragedy, especially bad at this time of the year. My sympathy and prayers go out to all who affected.

Please let us know if a fund is available to support the families.

There is a go fund me for our family if you guys are willing to donate not just money clothes, shoes feel free to text me sister on facebook @Meg Mariex.

It's a miracle those two kids got out alive.

Those kids are amazing! The miracle is that those pipes to the roof were even there. The “yellow pole” is a new gas line, that along with the electrical conduits were only relatively recently run up the side of the building to the new backup generators that have been installed on all the roofs of the buildings in Riis and Wald Houses.

Nine electric bike batteries were being charged when the fire erupted blowing out the windows and a wall in the residence according to a NY newspaper.