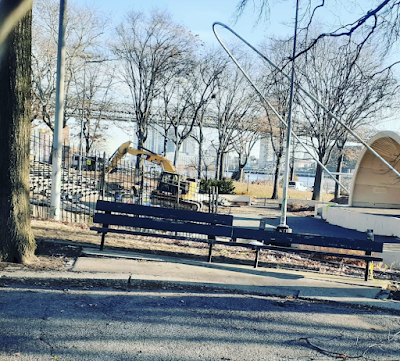 Yesterday, Court of Appeals Judge Rowan D. Wilson issued a new order that stays the previous Temporary Restraining Order (TRO), halting the construction at East River Park until a hearing on Thursday afternoon.
Judge Wilson also signed an order bringing on a motion to hold the respondent in contempt.

Despite this, activists at the construction site south of Houston Street this morning report that city-contracted workers continue to demolish portions of the park — as they did around the clock this past weekend, even with the TRO in place on the $1.45 billion East Side Coastal Resiliency project.
Photos from the scene show an excavator in action at the amphitheater.
In recent days, workers have focused on the now-closed section of East River Park from Stanton Street to Montgomery Street. Trees and amenities in this section have mostly been removed, witnesses say.
Photos of East River Park show a barren landscape with piles of tree stumps for those on the FDR to view (thanks to EVG reader John for this photo)... 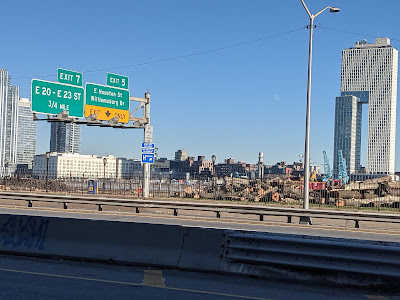 The city's response to date has been: "The city has reviewed the Court's written order, and we do not believe it prevents us from continuing work on this vital resiliency project.
Updated 3:30 p.m.
A group of activists has marched to local City Councilmember Carlina Rivera's office. Per a tweet, they are calling for her removal...

Come to ⁦@CarlinaRivera⁩’s office now. We are blocking the street and calling for her removal from office. 4th and B ⁦@ERPAction⁩ #SaveEastRiverPark pic.twitter.com/GxQGkeaqaQ

Updated 7 p.m.
Here are more photos from outside Rivera's office via EVG contributor Stacie Joy.
The activists tried to present Rivera with a copy of the latest order from Judge Wilson... 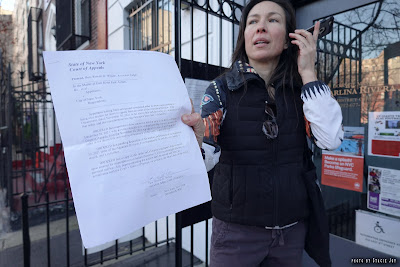 Although people were inside the office, no one would come to the door... and a copy was shoved under the door... 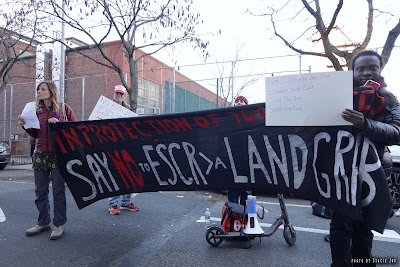 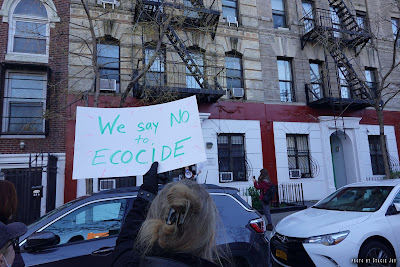 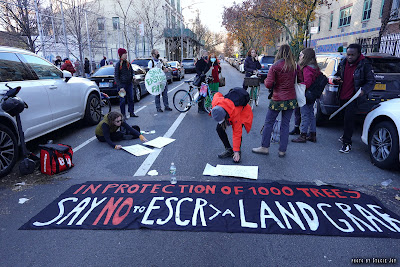 ...under the watchful eye of the NYPD. We're not aware of any arrests here. 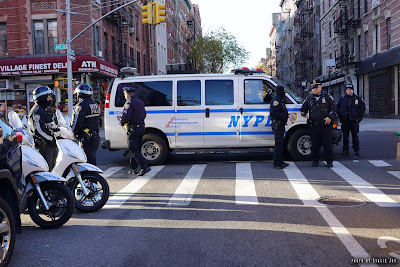 Top photo by @benjaminshepard via @eastriverparkaction.
Posted by Grieve at 10:00 AM

I really love this neighborhood but with the lack of available outdoor space I will be moving when my lease is up.

There is a vital resiliency project that should be constructed: It is the one this entire part of the city met for YEARS to make happen -- not this massively different change of plans that the community was shocked to learn was getting railroaded through.

Will they close the track amd soccer field for 2+ Years

And some people wonder why government officials are no longer trusted.

Shouldn't the Parks Commissioner be arrested for this? The judge orders work to stop, and the city says "we don't think the word "STOP" applies to us."

Why is no one being arrested for multiple violations of a court order? This whole scheme is disgusting. Who does the law serve here? Obviously real estate, and the corrupt outgoing administration is working overtime to shove this through in it's waning days. We'll have no park for probably a decade, and no shade from trees for the next 30. This is really an abomination!

It is painful to even look at your photos of all those great trees cut down and the East River Park turned into a construction site wasteland. What a travesty as one of the Mayors final gifts to the people of the LES/EV as something to remember him by as he finally leaves public office.

I cannot bring myself to look at photos of the park. I saw that Stuyvesant Cove is bulldozed already and became so depressed. If the city won't obey the law, what hope do we have for anything?

So disappointed in our local pols. WHERE ARE YOU ????!!

The hope is in people coming together. If there had been one thousand people protesting last weekend, instead of one hundred, this never would have happened. We obviously can't rely on our politicians when push comes to shove

If the politicians don’t have to follow the law, then the people who elected them don’t either and can use similar tactics to stop this travesty.

We are not wealthy enough to stop it

Thank you to everyone who is documenting, protesting, and organizing! You are speaking for so many who cannot be there with you.

The loss of our beloved park is heartbreaking, and the destruction being wrought is absolutely sickening. I don't know why, but I really am surprised at the sheer audacity of the city defying two separate court orders. But no one should be surprised that Carlina Rivera is unwilling to listen to her constituents on this issue. A principled politician would stand up and speak out in support of the rule of law, even if that meant the plan they supported would be delayed or even replaced. Hopefully, everyone can now see that we are not represented by a principled politician. Simply disgraceful.

Meanwhile Rivera won by a landslide. Get out and vote people!

I'm glad Carlina is losing steam in the speaker race. At least she can't multiply the damage she's doing by becoming more powerful.

I got flooded out by Sandy. Completely. I support this project.
Sorry, but the water levels will continue to rise and the salt watertable from the east river will eventually kill the trees anyway. 3 years of annoyance for a secure community with modern flood resistant facilities for residents. I think that they are doing the right thing, but fully understand if others do not agree with me and i respect their views.

Rivera is the enemy of the people.

I still have hope. I think we will win this fight and keep our park. I wish I could do more.
Folks, follow @eastriverparkaction and @1000people1000trees.
You can donate to help with the law suit.

The city wants DESPERATELY to spend the unnecessarily HUGE $$$$$ received from the feds to raise the entire length of East River Park by ten feet. Most of those $$$$ will go into many pockets that have NOTHING to do with stopping rising water.

The SMART solution (I've seen it done in many cities) is a FLOOD WALL. The problem is that a wall will cost a lot LESS, so there is less opportunity for CORRUPTION, and the wall will WORK, so no opportunity for perpetual
construction to keep the water out of the LES.

As a judge has issued an ORDER that STOPS the city and t's contractor from destroying East River Park, those violating said ORDER are supposed to be ARRESTED.

One can only wonder WHY deBlazio is in such a RUSH to DESTROY that park beyond repair as he has only TWO WEEKS before he must leave office - from there, that piece of shit wants to run for GOVERNOR of New York!!!!

Carlina Rivera, who has nothing but utter CONTEMPT for residents of the Lower East Side, and who "represents" real estate vultures over residents here, made a BIG mistake hitching her wagon to deBlazio....

The trees in the park are/were healthy after Sandy, Henri and Ida.

The Save the Park crowd is delusional and conspiratorial -- there is no land grab here (what, are developers going after the NYCHA towers that run from Houston to 14th? The middle class co-ops and Mitchell Lama buildings to the south? How are they going to get in there, exactly?). The trees were doomed anyway. The new park will look shiny and new and gross but whatever, it'll be a nice amenity for people in the neighborhood for decades to come. The hilarity of this crowd, god love 'em, going to the mat to protect ROBERT MOSES PARK is just too much.

More importantly, we NEED flood protection (and in particular, the projects on Avenue D need flood protection). The city should but will not bury FDR and inconvenience the poor beleaguered motorists. So it's this plan or more flooding and more months without heat or power for many people.

That said, way to go, BDB for giving them a big old cross to hoist their martyr complex upon....

My god, the ridiculousness of a bunch of lefties getting ugly with Carlina Rivera, one of the most progressive people in the City Council, and notably good on open space and environmental issues, not to mention all the good poor people issues stuff she's done. It's toxic and reeks of misogyny. There's a million legit developer meat puppets out there and you're gonna come for her? One of the rare genuinely good ones? We're so screwed...