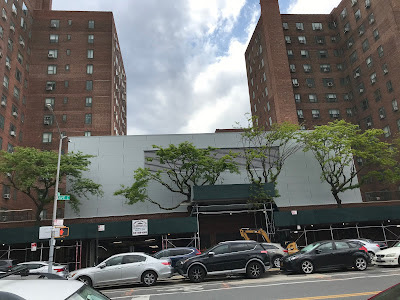 The Stuyvesant Town-Peter Cooper Village Tenants Association is hosting a rally tomorrow (Thursday, Dec. 16) at 11 a.m. to speak out against their property's natural gas power plants.
According to a TA rep, the majority owner, the giant real-estate investor Blackstone Group, has built one (not yet operational) and is planning another on the 80-acre parcel.
"We've been fighting this for more than a year," the rep said via email.
And it sounds as if they have some help. Local elected officials, including City Councilmember Keith Powers, Assemblymember Harvey Epstein, State Sen. Brad Hoylman and Rep. Carolyn Maloney are expected to attend.
Details and background here via the Tenants Association:

Blackstone decided to build the plants on the property to lower their electric bill with Con Ed because gas and electricity are included in our rents. The electricity would be exported to the Con Ed grid, and our buildings would get the steam as a byproduct for heat.
A major issue is that we think this violates the zoning applying to the property. But the pollution is of concern beyond our community. The plants are CHP (combined heat and power), also known as cogen, short for cogeneration, burn natural gas (a fossil fuel), and are regarded as less polluting than other types of plants. But Con Ed will not be reducing its output, so any emissions from the plants in ST will be additive. The plant that has been built but isn't yet operational is on Avenue C between 15th and 16th Streets.
Our neighbors to the south are already living in the shadow of the massive Con Ed plant on 14th Street. Our air is already some of the most polluted in the city with the resulting bad health outcomes.

StuyTown-Peter Cooper management previously said that "the project will significantly reduce source greenhouse gas emissions" and that the property "remains a model for best-in-class sustainability practices."

The rally takes place on Avenue C at 16th Street. You can find more background via the TA's website here.

The TA's last rally was in June. You can read coverage of that at amNY ... and The Village Sun.
Posted by Grieve at 11:00 AM

Ironically Peter Cooper and Sty town were built on land that used to be the Gas House District - where gas storage tanks were situated . And also where the famous Gas Light Gang was from.

A great illustration of how corporations systematically fuck people over. The whole concept of corporation was invented so that no individual people ever have to answer for horrible acts of inhumanity committed in the name of profits. "I'm only doing my job, doing what my superior asks of me, to help improve our company's bottom line" is what they all get to say. And this is how power plants get built outside of kids bedroom windows, among many other things.

CHP (combined heat+power) plants were the very thing that allowed several buildings to keep operating during/after Hurricane Sandy. All the power lines to the building can go down, and your elevator still works.

@Sim City Mayor: the power from the Stuy Town plants is going back to Con Ed, not into the buildings. If Con Ed goes down, there's no power.

Fascinating that the Stuy Town TA is not concerned about air pollution from the FDR Drive across the street.

what everyone should understand is that NYC has the highest electric rates in the country because wholesale and retail energy was deregulated a decade ago, and NYC is the 2nd largest consumer of power in the world, that we just LOST 80% of our carbon-free power when the state shut down Indian Point. IP was shut down because a fracked-gas power company was bribing a Cuomo aide and was Cuomo's biggest donor. The gas Blackstone would use is fracked-gas which has 100 times the global warming impact as Co2. Fracked-gas has a large number if known as well as unknown chemicals and it is highly radioactive. The NYC now has just become almost entirely dependent on fracked-gas and that pollution is now traveling into NYC while making NYC more vulnerable to super storms. IP was one of the safest and most reliable plants in the country entirely funded by taxpayers. Also that we are paying for the new fracked gas power plants right now on our con-ed bills. And most importantly all of the politicians that are going to speak now and talk about pollution and climate change are disingenuous because they have all known these plans were in the works years ago and these outocomes were inevitable. The real underlying problem is that we no longer have our baseload carbon-free source of power and without out its just a matter of where the pollution will start and where it will go and who will get flooded first and who will get flooded later. That's it. I've been fighting this issue for ten years. The only rational solution is to reopen IP and also bring in Canadian Hydropower, ban all fossil fuel but beginning with fracked-gas which is the worse possible source of power. So while you are demanding that the politicians shut down these CHP turbines you should also ask them if they care about the climate how could they sit by and let NYC get plugged into fracked gas dependency for the next 40 years, not only poisoning us and our childrens future but making us all pay for it!!!

IP also generates radioactive waste, for which no safe storage solution exists, and was/is past its use date and had its share of leaks and security problems, and if it had ever had a large release of radioactive material, NYC could be rendered uninhabitable, which is much worse than the incremental problem we have with fossil fuel pollutants. Rather than arguing that we re-open a very old nuclear power plant, we should be pushing for NYC and NY to greatly increase solar, wind and ocean power-producing capacity.

the radioactive waste from IP is a fraction of the radioactive emissions from fracked gas which is pouring into your homes from you stoves, gas furnaces, and gas power plants like East River Gen. The waste from IP is stored safely in dry casks, unlike radioactive waste from fracked gas which is entirely unregulated and ubiquitous. IP wasnt closed because of safety issues, it was closed because of a bribery scheme. Read the indictment of Joesph Percoco by Preet Bharara. Moreover read Dr. James Hansen father of climate science. 7-8 million people die annually from fossil fuel air pollution. That is EVERY YEAR. Climate change isn't a risk it is a present danger which is killing tens of thousands of people every year as well, and those numbers are increasing too. You can be antinuclear or anti-climate change you simply cannot be both. Happy to debate anyone publicly on this issue any time.

Until there is a technology breakthrough in developing cheap massive battery storage intermittent energy producers such as solar and wind can never be a mainstay of energy production.