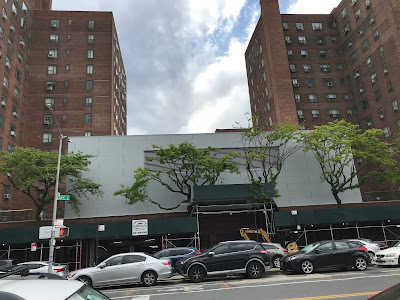 The Stuyvesant Town-Peter Cooper Village Tenants Association is holding a rally tomorrow (Sunday, June 6) at 10 a.m. to speak out against plans for another "polluting power plant" on the property.
Per the invite: "We’re not the only ones affected: so will be anyone within at least half a mile of the plants. According to the city, we have some of the worst air, and environmental justice is a concern."
The rally is on Avenue C between 15th Street and 16th Street. Several local elected officials are expected to attend.
Details and background here via the Tenants Association:

In 2018, Beam Living announced they would be constructing a power plant fueled by natural gas purchased from Con Ed on the Main level between 245 and 271 Avenue C. The plant would produce steam for 24 buildings, and the electricity would go back to Con Ed to offset management’s costs. Renderings of the plant shown to the Tenants Association and to tenants depicted a smaller, less intrusive structure than the final version. The plant was almost complete in 2020 when Beam Living announced a second plant, this one to be constructed under the floor of Garage #1 on 20th Street. Any electricity produced would be sold back to Con Ed.

the real question is who gets the data from the surveillance meters! Your landlord or Con Ed? Or both?

Beam Living/Blackstone are the absolutely worst bloodsuckers in the world. Human life means nothing to them. They worship money and are totally obscene.

I don't live in Stuy Town but nearby, and walk by the new Avenue C plant. It's huge and right outside peoples' apartment windows. What a blight! I can't imagine how this could be legal.

RALLY INFO
WHEN: THIS SUNDAY, JUNE 6, at 10 a.m.—rally against CHP power plants in Stuy Town & Neighboring Communities
WHERE: Avenue C between 15th & 16th Streets
BRING: A sign—slogan of your choice

Of course it's not legal. It's not legal and it's not ethical. But when a megabucks mob like Blackstone waves money at the various politicians and City Agencies, it suddenly gets called "legal."

People are going to get sick and die from the pollution these monstrosities spew and for what? So that a hideous bunch of godless, heartless, amoral blood-suckers can suck more blood and kill people and think that makes them successful at life. Blackstone/BeamLiving is only successful at death and misery. They have a worldwide reputation for that kind of success and perverse as they are, they're probably proud of it!

At least Stuyvesant Town has put 9700+ solar panels on their roofs in order to lower their carbon footprint.

What they are doing with the fossil fuel-burning power plants totally negates the solar panels initiative. This is a company that is hungry for money in a most pathological way. They are not going to benefit tenants by these power plants; they are going to sell the electricity to Con Ed. We get our steam heat from Con Ed, but there is a totally malfunctioning computerized system in the project that ensures that many tenants get little-to-no heat during the cold months. We have to use space heaters.
This landlord is desperate for new tenants and offers a "bounty" to anyone who can bring one in. They have to rent to students and (I am told) City-subsidized tenants. The reputation they have is so terrible that they cannot find people to sign leases at the outrageous rents they demand.
Read up about Blackstone and the world-wide damage it has done to the housing market and you will understand why they have to beg for tenants and why they will do anything, but anything, to make a dime even if it results in sickness and death being inflicted on the tenants.
Blackstone is The Landlord from Hell.

"At least Stuyvesant Town has put 9700+ solar panels on their roofs in order to lower their carbon footprint."

Thank you for providing one of Blackstone's talking points that has nothing to do with 2 major fossil fuel plants (CHPs) that will, no matter what the Blackstone spin says, have a major impact in the degradation of the air quality of STPCV/EV/LES. Also, as per the NYC zoning law for the interior of STPCV, both of these CHP plants are not "resident amenities" so matter what the corrupt DOB says.