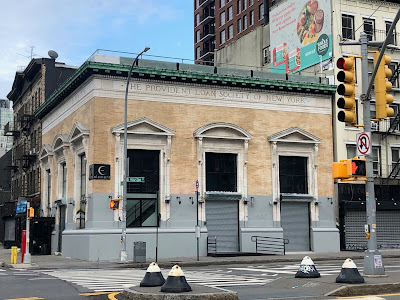 Workers have removed the plywood that covered the windows and other sections of the former Provident Loan Society building on the southwest corner of Houston and Essex ... which has been undergoing a gut renovation this past year. (Thanks to the EVG reader for the tip!)
A worker at the scene said that this was going to be a broadcast production facility, but had no other information. And we don't know if this is accurate. Update: It's not. A place of assembly permit was recently created for an "eating and drinking establishment." (H/T Upper West Sider!)
According to approved DOB permits from January 2020, workers are here for a "general renovation of existing cabaret" with "no change to use, egress or occupancy."
Anyway, cutting-and-pasting from previous posts...  this marks a new era for the old (circa 1912) building that has been on redevelopment/demolition watch these past six-plus years.
As you may recall, longtime owners Elsa and Dunnie Lai unveiled plans several years ago — amid neighborhood opposition — to enlarge and convert the property into a 38-unit residential building with a 12-story addition atop the existing bank structure.
Those plans never materialized (the DOB did approve the building permits) ... and by July 2018, the building went on the market for $20 million as a "prime development opportunity," as BoweryBoogie reported at the time. No. 225 never sold, however.

In the past 25 years, a string of clubs and concepts have come and gone here. The space served as a studio for Jasper Johns in the 1970s.

Previously on EV Grieve:
• New renderings for the luxury building that will hang out over the Mercury Lounge

• Then and now: The Provident Loan Society of New York
Posted by Grieve at 4:50 AM

let me take the opportunity to reminisce fondly about when it was called the bank, and you could dance in the vault at 3 am while snow sifted in through an open skylight! also notable: i saw a guy there one night with the map of narnia painted in wite-out on his floor-length leather coat.

ahhh The Bank… at the time I was living at the newly opened Red Square building and went to The Bank often. one crazy night i found myself dancing with a very… ahem… “enthusiastic” Goldie Hawn in the vault among many fond memories. it was a fantastic club for a very brief period