Sushi next for the former Fresco space on 2nd Avenue 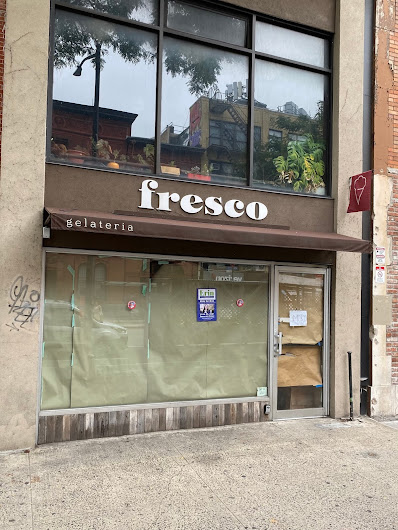 We heard rumors that a sushi restaurant was taking over the former Fresco outpost at 138 Second Ave. between St. Mark's Place and Ninth Street.
There's now a note on the door for the contractors, and it lists the name of the incoming establishment — Moko (thanks to Steven for the photos)... 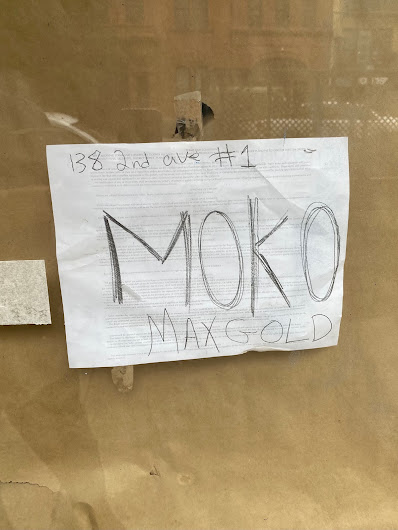 The restaurant has an under-construction website, which notes: "High-end Omakase starting at $65."
As previously reported, the owners of Fresco — citing a decline in business during the pandemic — temporarily shut down their 8-year-old gelateria-cafe and returned to their native Greece last October.
They had hoped to reopen in January, but those plans didn't materialize at the time with the surge in COVID cases and continued limits on indoor service. The space hit the rental market in April.
However, Fresco hopes to find a new storefront elsewhere downtown in the months ahead.
Posted by Grieve at 5:02 AM

another buildout for the residents to endure = this is a constant tax on residents. Its not healthy but who cares, it just residents.

We're complaining about restaurant build outs now? Last I checked, they usually don't put up a lot of scaffolding and bring in cement trucks when turning over restaurants. Leave it to the EVGrumps to find a way to complain about a vacant storefront becoming occupied!

Exactly NiceGuy and I thought I'd seen it all here.

This is a welcome if expensive (starting at 65$! yikes) replacement for Fresco which was modern and cozy!, MrNiceGuy the commenter might be reacting in this way because there was a ridiculously long 3+ year build out of Brasserie Saint Mac right next door, not your usual build out by any definition. but totally agree we gotta get all the empty storefronts back to life and welcome new businesses to the hood with open arms! Note to new businesses: no out door loud Please and thank You

I miss Fresco. Hope they find somewhere nearby soon.