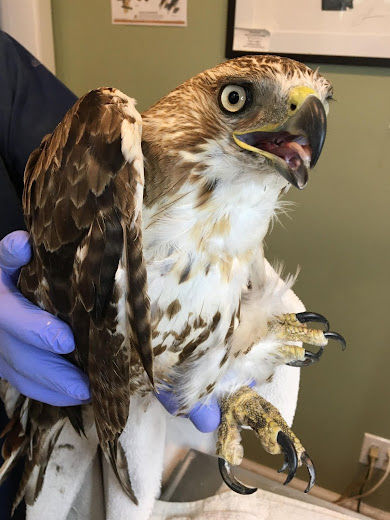 This past Thursday, East Village resident Helen Stratford, a.k.a. Helen the Accordion Lady, was walking on Houston Street near Whole Foods when she noticed a group of bystanders trying to help a bird in distress on the sidewalk.

Several people tried to assist what turned out to be a female juvenile red-tailed hawk. Whenever anyone got too close, the agitated young hawk tried to fly off, landing in the street where a car clipped her.

As EVG correspondent Steven reports, Stratford took charge of the situation, first going into Whole Foods at the Bowery and commandeering two shopping baskets to help corral the hawk. She also asked Whole Foods staffers to find a large cardboard box and punch holes in it.

Stratford and a bystander successfully got the hawk into the makeshift basket cage, where she covered it with her shawl. Stratford and a tourist from Austin, Texas, then called a Lyft and transported their passenger to the Wild Bird Fund on the Upper West Side.

In a follow-up on Twitter, the Wild Bird Fund reported that the young hawk, estimated to be about a year old, "got into a fight with another raptor," which led to the collision on the sidewalk and street.

Fortunately, the Wild Bird Fund also reported that the hawk "is stunned but not badly injured." A volunteer said that they would eventually release the hawk back into the wild.

For now, the Wild Bird Fund has given the hawk the nickname "Helen."
Updated 6 p.m.
The Wild Bird Fund released the hawk this afternoon in Central Park... Stratford can be heard in the background calling out "we love you" as the hawk flies off...
Photo by Phyllis Tseng via Twitter
Posted by Grieve at 5:00 AM

Wonderful story and Helen is a Wonderful EV character. I first met her playing accordion at the 2nd St Cemetery. Always colorfully dressed.

Amazing grace on the part of everyone who stepped up here. More of this, please. Well done, Helen and friends! Glad our feathered friend is on the mend.

Thank you for taking care of our avian neighbor, Helen!Shawls FTW!

Awww the hawk moved from East Village to Upper West Side with stunning views of Central Park! What an upgrade!

Thank you, Helen and TX Tourist, as well as the Wild Bird Fund, for helping out the distressed bird!

Thank you, Helen, for your courage and determination to help this hawk! She is so lucky you were there to help her, likely saving her life.

Thank you Helen! She noticed a situation that needed help instead of just pulling at her iPhone and videoing it for posting on socials later

Thank you, Helen and all who assisted in the rescue. Wild Bird Fund really does God's work, so to speak.

THIS is a big part of why I LOVE NYC! People who will help out and who know what they're doing!

I'm picturing a hawk in a LYFT on the way to the UWS: an only-in-NYC image, for sure.

This is just another reason why we love Helen. She is such a great person and we are lucky to have her as part of our neighborhood. Even if I am having a bad day, hearing her music or even seeing her lovely smile is enough to turn my day around!

Heln Stratford is a magic lady, whether it is singing La Vie en Rose in the NY Marble Cemetery (when it is open to the public), or on the corner of Avenue A and East 3rd Street during a pandemic, and now charming raptors, We love Helen.

I love this story! Thank to Helen and thanks to you, Grieve, for reporting it!

Thank you Helen, you were an 😇 for that handsome Hawk! Thanks to everyone that helped. This is a Great story, Thanks EV Grieve!