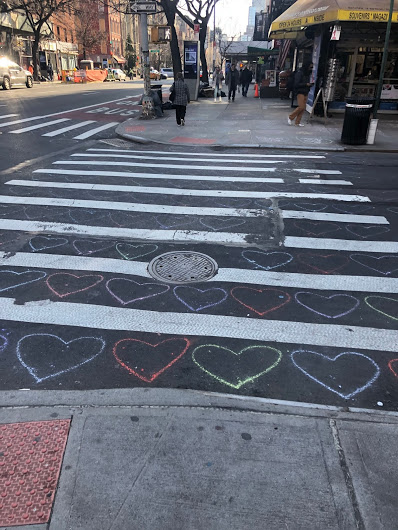 Hash Halper, the artist who helped beautify streets by drawing chalk hearts on the sidewalks around the East Village and other parts of the city, has died.
According to the Art of Our Century Gallery, Halper took his own life. He was 41.
The Gallery, where Halper had a solo show back in February, shared the following on Instagram: "He was a thoughtful, kind, peaceful and talented man."
He just opened his second solo show last Thursday at the gallery Bento on Hudson.
Halper, aka @newyorkromantic, was often spotted chalking hearts on streets and sidewalks, showing struggling businesses some love along the way as well. 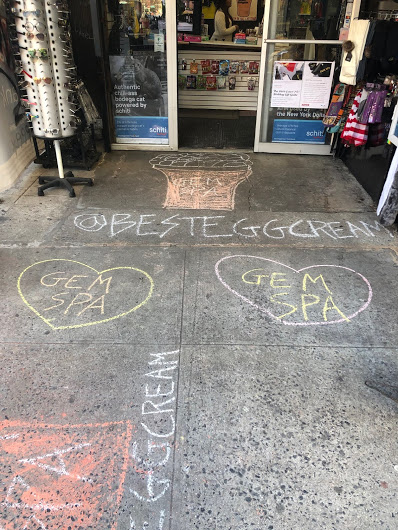 He told The New York Times in February 2018 that he draws the hearts "because he feels New York is losing its romance, with people holding phones instead of looking at each other."
Halper drew his first hearts in 2014 while working at Kossar's Bagels & Bialys on Grand Street. "The reason I started drawing hearts all over the city is because I fell in love with a woman." 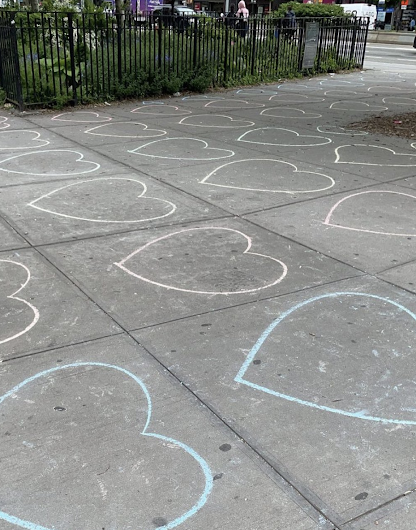 After he met the woman, he would pay homage to her by writing her initials, "MSB," along with hearts, on the sidewalks and buildings that lay along his route to work. "I wanted to infuse that romance into the city," he said.

The two eventually stopped seeing each other, but he continued on leaving the hearts — as many as 100 a day.
According to the Times, Halper was raised in modern Orthodox communities in Philadelphia and Washington Heights and attended Yeshiva University "before becoming less religious in his 20s."
Sold Magazine had this to say about Halper in May 2020:

Even in these turbulent times, Hash continues to give NYC the love it needs. He starts his day dedicatedly chalking out hearts on the streets, providing the denizens of the city with hope for a conclusive solution to Covid 19 and a restoration that things will resume back to normal. The city needs love right now, and Hash's hearts continue to fortify the flow of healing energy that is much needed, bringing light and positivity everywhere he goes. 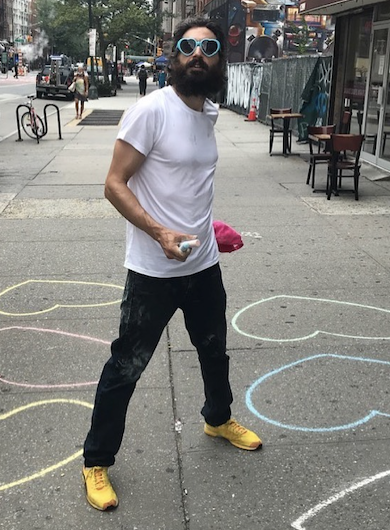 If you or someone you know is at risk of suicide, then please call the National Suicide Prevention Lifeline at 800-273-8255, text TALK to 741741 or visit SpeakingOfSuicide.com/resources.
Top photos from 2020 by Steven; bottom two photos via @NewYorkRomantic
Posted by Grieve at 5:30 AM

OMG so saddened to hear this.Several of my images featured his hearts.We spoke several times and followed each other on Instagram. Sweet man.
RIP

I did not know him but I loved his hearts,

This is sad, the hearts were a joyful sight on the sidewalks...

So sad. And so young. Only 41. Heartbreaking!

Such a sad story to hear. I guess he always loved the world, but the world did not always love him back. Let's love more.

This is so sad. I ran into him chalking once and he told me his Instagram handle and I started following him and he followed me back. He seemed like a really nice guy and his hearts always made me smile. Recently my 2 year old started noticing the hearts on the ground and he'd point them out and say, "heart, another heart" every time.

RIP - very sad news. I enjoyed his heart art all over the EV and met him once at the park. He told me where to get street chalk down at a bodega on Ave A - very nice guy. We should all carry on his tradition

Was so saddened to hear about Hash. I always loved seeing him around the neighborhood bringing his art to everyone. It always put a smile on my face whenever I saw the hearts around. RIP.

I remember Hash, the heart artist friend, for years, always coming in, greeting me at work, at JP in Nolita. He would do a few sets of pull ups. Then he would go outside draw some big hearts on the sidewalk and then wave goodbye to me. The hearts were colorful and brought a smile to my face. Sadly a few hours later the workers that clean the bldg would hose them down. Then on my way home to the EV I'd run into more hearts. NY is going to miss you. RIP Hash

So sorry to hear this - I loved the hearts.

I saw him drawing hearts in Tompkins and near Gem Spa. He brought joy to so many of us with this simple act. So many people are suffering mentally, especially during the pandemic. I hope anyone who needs help reaches out. Sometimes just talking to one person can make a difference.


I ran into him chalking once. I'm glad I thanked him for his work at the time.

Just read about this from his brother. Only met him a couple of times but a wonderful bubble of energy has popped. Truly heartbreaking.

Thank you for writing about Hash. Last summer, I first noticed the hearts in the East Village and in Tompkins Square Park when I went to observe the three young red-tailed hawks. It meant so much to see the cheerful chalked hearts and I often wondered who the artist was. Now I know.

This is so horribly sad. What a beautiful man.

What a tremendous loss. I'm in shock just finding out. Dear Hash, may all the love you poured be holding you now. You added so much rich love to our world. Blessings keep you. Thank you. Love you.

This is so very sad. There are too many young men ending their lives. It's a modern day tragedy. My son Dan took his life aged 27. The pain never leaves you. Rest on peace Hash n Dan. X