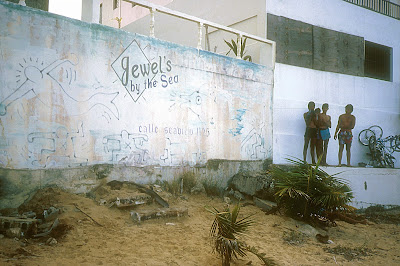 Photos of Keith Haring's art in San Juan circa 1986 is the subject of a new exhibit this evening at Village Works, the gallery space at 90 E. Third St. between First Avenue and Second Avenue.
Per the listing:

The collection of photographs was taken in December 1986 of Keith Haring's public art. Haring executed this beach wall mural in early Summer 1986 on the Condado Beach in San Juan, Puerto Rico. D.C. Larue photographed details of the work over the December 1986 holiday season. The mural had been weathered over the months by the sand, wind and rain and the effect beautifully resonated with Larue.

In February 1987, a hurricane washed the entire retaining wall the mural was on into the sea. The photographs were authenticated by the Keith Haring Foundation for D.C. Larue in 1993.