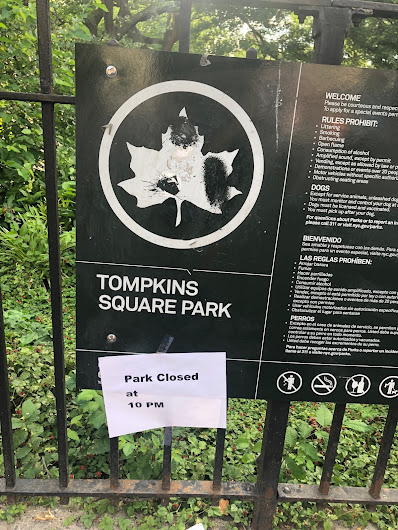 Updated 6/13: There wasn't any curfew on Saturday night, and the Park remained open...
These homemade signs about a 10 p.m. curfew are now posted at entrances around Tompkins Square Park.
Last Saturday, the Park suddenly had a 10 p.m. curfew (instead of the usual and unofficial midnight). As Gothamist reported, the NYPD had at least two officers stationed at all nine entrances to Tompkins. Importantly: "The decision was made without any notice to the Mayor's Office, the local Council Member, or the public."
This came on the same night as riot-gear-clad NYPD officers clashed with park-goers in Washington Square Park over enforcement of a 10 p.m. curfew there. Union Square Park was also shut down at 10 p.m. last Saturday.
While there's now apparently a 10 p.m. weekend curfew in Tompkins Square Park, the one for Washington Square Park has been suspended, NY1 reported this morning.
Meanwhile, it is not immediately clear who placed these unofficial-looking signs around the Park. (And one reader thought that "Park closes at 10 p.m." would be better than "Park closed at 10 p.m.")
This is the latest effort by the NYPD to crack down on everything in the Park from amplified music to zine sales.
Posted by Grieve at 10:00 AM

Whose Fukin Park ? The NYPD's Fukin Park !!! Someone should post another sign that says We Surrender all control of this Park to the NYPD and to those who shed blood , sweat and tears to resist closures and curfews at Tompkins Square Park well you suckers had no idea the new neighborhood residents now can afford to go to Fire Island and Long Island on the weekends so they don't care.

brb tearing these down

No worries. This statement is over, someone just wanted us to know that the park closed at 10.
I have studied physics, maths, and english. To understand this note you need base knowledge in all 3. So closed is physics and is the past(tense) 10 is math, is also the past, the words are english, also expressing the past.

You don’t have to be super rich to go to Long Island lol. Cross the Williamsburg bride and your in Long Island

Also it seems they are ordering riders to get off and walk their bikes thru the park. Not a bad thing per se but would be better if everyone just did it because it's the right thing to do in a small scale, slow park with many children and elderly pedestrians.

closed never! Amplified sound however should be a daytime only thing the late raves that been happening in both parks not great and bring a lot of yelling folks, parks def should be open for public 24/7 but use should be patrolled and quiet after 10pm

People who lived and lives in the neighborhood were going to fire island and to the Hamptons for decades. Not that impossible to afford.

We are not Greenwich Village and we are not WSP. We accept our drug corner and we welcome people to our park

I have greatly appreciated being able to ride my bike slowly and safely through the park, and I haven't generally noticed this being abused or people seeming concerned over it. Tompkins has its own culture. Let us have it! If the park has to be closed, make it 1 or 2am. 10pm is ridiculous, it's just dark only at 8:30-9pm.

Good. More law and order is good for neighborhood and the people WHO ACTUALLY LIVE HERE. If you visit us, then behave yourselves.

One dead 19 wounded in NYC so far this weekend. This is the headline. The NYPD is stirring up trouble in Tompkins Square and Washington Square to distract from the new reality of out of control gun violence all over the city.