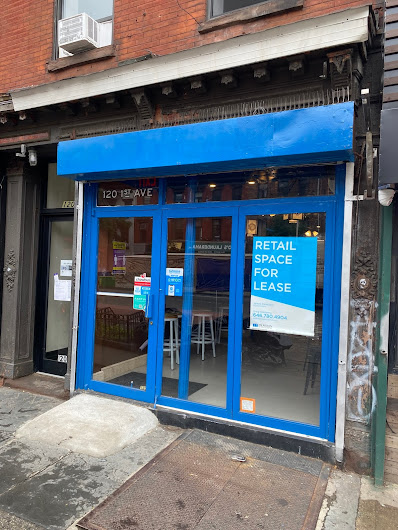 Chef Hans Asian Kitchen has apparently closed after just a few weeks in business at 120 First Ave. between Seventh Street and St. Mark's Place.
The quick-serve restaurant, offering a variety of noodle dishes and appetizers, had its soft opening on May 4. By May 26, they had updated the menu.
And now, someone has removed the Chef Hans signage and emptied out the interior ... and the space is for rent once again... (thanks to Steven for the photos)... 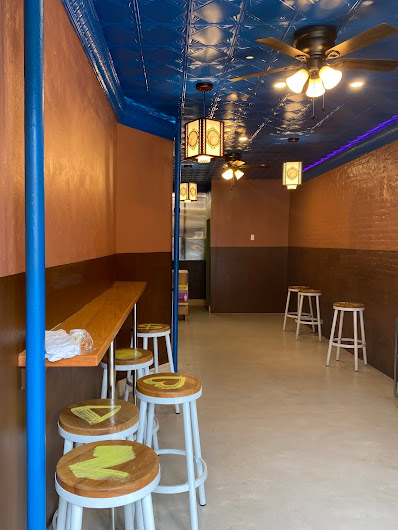 Anyone out there try Chef Hans? The restaurant's Instagram account and Yelp page were awfully lonely.
In April, signage for Chef Hans arrived here  ... this was after a March report @TradedNY account noting that Jian Bing Man, which specializes in Chinese crêpes, signed a lease for the storefront.
The previous tenant here, Doma Food and Drinks, a Korean bistro, didn't have much of a chance, opening in February 2020 — about six weeks before the PAUSE ... this was a new concept from the owners of the Tang, which opened in this space in July 2016.
Previously on EV Grieve:
• On second thought, Chef Hans looks to be the new tenant for 120 1st Ave.
Posted by Grieve at 5:00 AM

Baffling. Do people not make sure they have cash for six months after they open?

Sad, but honestly that part of the hood is saturated with this fare.