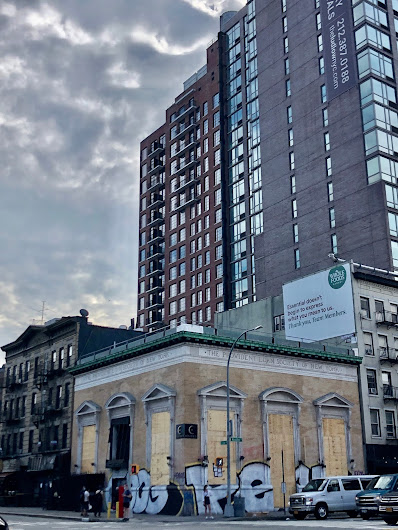 Workers recently covered parts of the former Provident Loan Society building with sheets of plywood on the southwest corner of Houston and Essex... as interior renovations picked up ... 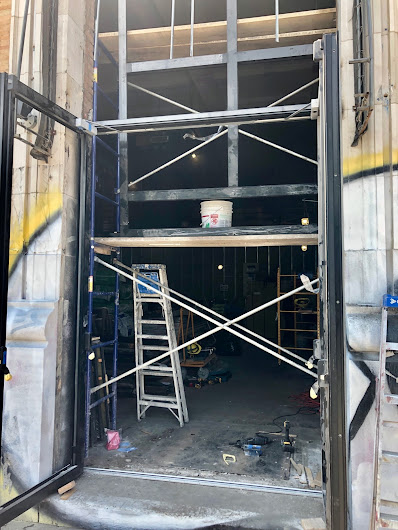 This marks a new era for the old (circa 1912) building that has been on redevelopment/demolition watch these past five-plus years.

As you may recall, longtime owners Elsa and Dunnie Lai unveiled plans several years ago — amid neighborhood opposition — to enlarge and convert the property into a 38-unit residential building with a 12-story addition atop the existing bank structure ... remember? 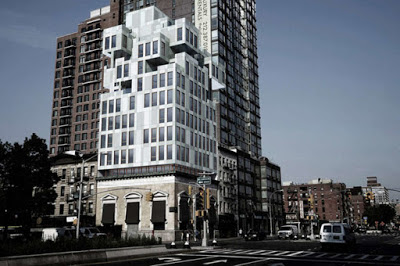 Anyway, those plans never materialized (the DOB did approve the building permits) ... and by July 2018, the building went on the market for $20 million as a "prime development opportunity," as BoweryBoogie reported at the time.

No. 225 never sold, and, according to approved DOB permits from this past January, workers are here for a "general renovation of existing cabaret" with "no change to use, egress or occupancy."

It's not known at the moment what the owners have in store for the under-renovation space. They have not responded to an email asking for details on the building's future.

In the past 25 years, a string of clubs and concepts have come and gone here. The space served as a studio for Jasper Johns in the 1970s.

Previously on EV Grieve:
• New renderings for the luxury building that will hang out over the Mercury Lounge

• Then and now: The Provident Loan Society of New York
Posted by Grieve at 5:39 AM

In the early 90’s it was the club Bank and I remember seeing Goldie Hawn dancing her a$$ off on the dance floor one early morning, I had just moved into the newly opened Red Square building

What an effin' ugly "addition" to a classic building. There is no end to the ugliness of today's society.

She was filming a comedy in St Marks

I think I remember her saying something about that...she was SO. MUCH. FUN.