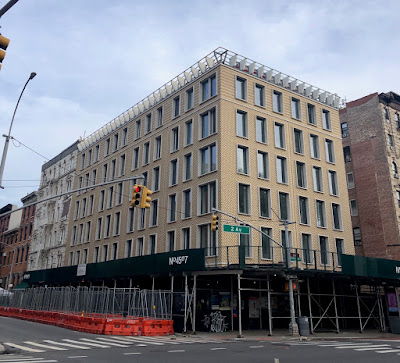 Here are details about the Morris Adjmi-designed building — dubbed No45e7 — and units via Real Estate Weekly, who first reported on the sales:


Each unit has oversized windows, high-efficiency central VRF heating and cooling and is pre-wired for smart home features including shades, lighting, sound and intercom.

Prices will range from approximately $1.35 million for one-bedroom, $1.995 million to $4 million for two- and three-bedrooms, going up to $8.3 million for the penthouse.

There will also be ground-floor retail. 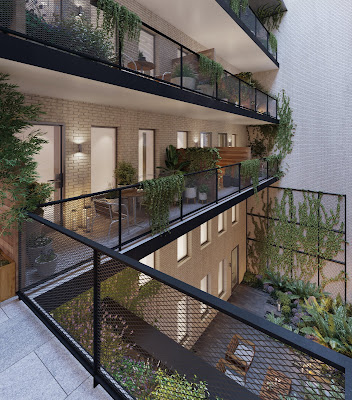 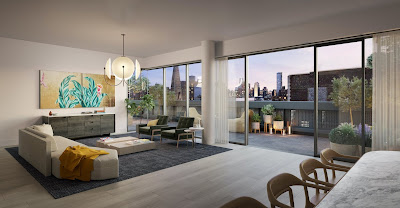 In response to launching sales during the pandemic, in which apartment sales in Manhattan have hit their lowest point in nearly 20 years, a spokesperson for the developer, Shaky Cohen's Nexus Building Development Group, told Real Estate Weekly: "While many developers may be hesitant to launch during the current pandemic, Nexus Development is confident of the market recovery and that their product offers the exact level of safety, space and comfort to give buyers confidence in a post-COVID world."

As for some history here: In the spring of 2017, Nexus Building Development Group paid $9.15 million for the empty lots at No. 119 and No. 121 that landlord Maria Hrynenko owned.

In a previously recorded transaction, Ezra Wibowo paid $6 million for the adjacent property at 123 Second Ave. that was owned by a different landlord who had no role in the explosion. There isn't any development planned there for now, according to previous reports.

In January, Hrynenko, contractor Dilber Kukic and unlicensed plumber Jerry Ioannidis were found guilty of manslaughter, criminally negligent homicide and related offenses for their role in the blast. They were each sentenced to four to 12 years in prison. Hrynenko is out on bail as she awaits an appeal of the case.

The property will include a commemorative plaque that honors the two men who died here on March 26, 2015: Nicholas Figueroa and Moises Locón. In October 2017, city officials unveiled new street blades that co-name the northwest corner of Second Avenue and Seventh Street after the two men.

$4 million for a three bedroom in the EV, or vey.

Money must be like water for some people. So, if I wanted to snag a two bedroom, I must come up with at least 4 million, not to mention closing costs and other fees. I am assuming this doesn't include a garage or pool? Just one floor with basic views of the EV? What the hell. Why not. Sounds perfect. Where do I sign on the dotted line???

yea, good luck with that.

For over a million, I want my own laundry room.

Anon. 9:20 AM - Oh, but think of the unimpeded views of the SantaCon drunks you will have from your Second Avenue-facing windows!

How about a commemorative plaque for the many families who lived at this address before, whose lives were totally disrupted and who can now never move back?

RIP handsome young men nicholas figueroa and moises loicón, gone but never forgotten, even by those who never met them!

Walked by this last week. Heroin users shooting up underneath the building and some passed out on a dirty couch across the street. It’s a shame these people cannot get help they need. DeBlasio has done nothing for this city.

Who wants an $8M penthouse that overlooks shuttered storefronts/restaurants and addicts passed out on the street?

Why do we even keep building things like this? No one can afford that unless they have a trust fund or otherwise.

EV lost two men’s lives here and 3 buildings that had affordable apartments all because of someone’s greedy hands.

I always said this spot should have been made into a public park. It could have been a beautiful oasis a tall fence, trees, flowers of all kinds and benches, two of which with the names of the two young men who sadly lost their lives. Our city can use more green spaces. Oh well. In the end, money reigns above human life and everything else. Money seems to be the only important thing we value now.

9:51 am I immediately thought the same thing. A Million Dollars and I'd still probably be waiting for a dryer on laundry day?

The prices of these condos are not surprising. It's what the market will bear. NYC has always been about real estate going back to it's very founding. In the pre tenement 19th century rich German landowners had mansions all over the EV. Can the average slob/ Bro/ anarchist on the LES afford them? No, but plenty of Russians, Chinese, wealthy businessmen of all stripes and well heeled groups of Euro-trash certainly can.

Those inner balconies remind me of a cheap drive up motel. And think the million dollar views are bad now.... just wait until they stuff another building in the empty lot!

If these people want help it is available. They cannot be forced into shelters or rehab centers. They won't be harassed or arrested. They have to do it themselves. If they really want help they can go to a city shelter or a private shelter like the Bowery Mission. I never understand these complaints about them not getting help. Go to the men's intake on 30th or a drop in center on 32nd St. They can't turn you away. This is a right to shelter city.

It's so gross that the woman who owned the former properties was able to profit off of their sale. That money should go to the families who lost their homes in the gas explosion and the families of the two men who died. And realistically, what kind of value are people getting who buy here? These apartments are not worth that kind of money, especially in a New York with no restaurants and no shops. God forbid the city build housing that regular people can afford.

I am curious about this as well.

Are the camped-out crusties considered a value-enhancing amenity? And, they don't have to go anywhere to get 'the help they need.' Too many times to count, I've witnessed City Outreach officials offering them assistance.They want no part of any help the city presents to them.

Marcos - I live directly across the street from this building, and attended the meeting for people displaced by the explosion (the whole block was evacuated for about a week). Of all the attendees, from both of the destroyed buildings, there were less than 5 tenants who were rent-stablized or rent-controlled. About 80-90% were 20 somethings who were unaware of the concept of rent regulation. So, I highly doubt that any provisions were considered to offer former tenants regulated units.

I still think all the people displaced by the blast should have first dibs on units.

Oh, I think we know the answer to that.

I lived for many years at 46 East 7th, just across the street from the since-incinerated buildings. Still standing. Same Owners (Michael H and family) I wonder just how lucky I was, because #46 was also a quick renovation job, with a natural-gas fueled restaurant (the Kiev Diner) sitting beneath our apartments.

Who in the fuck wishes to spend four million dollars during this uncertain, horrific financial climate to reside on a traffic ridden downtown corner when merchants around us are closing every other day, while crime is spiking upwards and where drug addicts have set up permanent camp below on the sidewalk? Our city is in dire trouble. We need stimulus from the federal government to lift up the corrupt MTA from collapsing, to provide real help to our homeless communities, counseling for the mentally ill, and to throw life jackets to struggling businesses before they drown in endless seas of debt And, let's be honest, the units are utilitarian and simply not worth it. I even contemplate if remaining when I have chosen to live here for over twenty years is now worth it, especially when numerous colleagues and friends have fled to other states not to mention all of the wonderful things which make NYC are gone or put on indefinite pause. For the amount of capital needed to purchase those ridiculous apartments, one can easily find something better on the UES or UWS with substantial views, amenities and more space. Hell, with four million, you could move into a mansion with acres and a large olympic pool in SLC, Utah, which is where I am originally from. My point is why spend that much when there's not much for us anymore. It's a hard pass for me.

@10:47am: I agree with your comment. I presume the apartments will be bought by bro's who want to live near the 13th Step so they don't have too far to stagger home.

Certainly no one who's actually been living in this area for the past 20+ years has that kind of stupid money to spend on these condos.

For over a million, I want my own laundry room.

For over a million, it's likely you'll have a maid to operate the washer/dryer you'll have on premises.

These apartments should first be give away for free to anyone that was displaced and/or immediate family members of the deceased. Unfortunately, I doubt that would happen... a real shame!

@ 10:47- Two beds start at at $2mil. For Manhattan that is an average price. Two years ago I renovated a studio apt w a Murphy bed in a midtown high rise. Cost of apt was $1.1 mil. The building had minimal elevator traffic. People from all over the world buy these shits as investment properties. For my client it was a weekend place. Large corporations invest in these units as tax deductions. It's prime real estate and it's definitely not SLC. CV19 will end at some point and these condos will eventually appreciate in value. Supply and demand, etc.

I believe that the displaced and families of the deceased had the opportunity to recover damages from the building owner. It would not be responsible to assess damages from the purchaser/ developer.

NYC - we used to be known for world class theater, ahead of the curve fashion and innovative dining, now it's just a place to wash dirty $. Apts are no longer shelter, in NYC they're "investment tools".