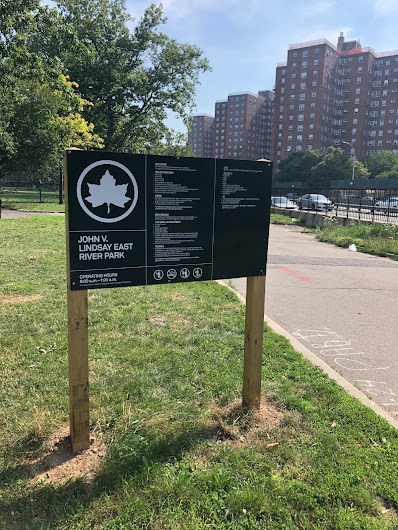 The lawsuit, East River Park Action et al v City of New York, originally filed in February, asked to halt the East Side Coastal Resiliency Project that is scheduled to begin this fall. It also asked to declare the City Council vote last November approving the project "null and void."

Attorney Arthur Schwartz argued in a 42-page brief filed on July 20 that the city is required to seek Alienation from the state. (Alienation is the use of parkland for non-park purposes, even for brief periods.)

"Closing the East River Park, whether completely or in phases, will disproportionately affect the health and well-being and recreational opportunities of low-income New Yorkers who live in the neighborhood around the Park," Schwartz said.

As The City reported:

Crane ... ruled from the bench that the resiliency project won’t permanently alter the use of East River Park.

Closures will be staggered, and the park will be rebuilt and reopened after construction is complete. "The entire system is designed to protect the park, and to protect the neighborhood behind it," Holland said.

But Pat Arnow, a ERPA leader, said the consequences of the ruling are "dire for the park." Without the alienation process, she fears the city will not be held to account to meet their own deadlines.

"The city says the project will be done in five years. There's nothing to hold them to that schedule," Arnow said in an email. "We think there’s little chance they can complete such a big, complicated project within that time."

Tight deadlines, however, are a big part of why the project is moving ahead now. Much of the funding for the $1.45 billion project comes from post-Superstorm Sandy allocations made by the U.S Department of Housing and Urban Development, which must be spent by 2022.

Last November, City Council signed off on the hotly contested flood-protection plan that will bury/elevate East River Park by eight feet as part of the East Side Coastal Resiliency Project. Construction is expected to start this fall.

What a travesty. Thanks to those who put up the good fight, but it was always a long shot once the new plan was foisted upon us. For those of us who use the park regularly, you can see how the city stopped maintaining the park all summer long. The grassy areas are overgrown, the trees that fell down weeks ago during the hurricane took weeks to clear away, with big piles of branches still left behind, and the trash is everywhere. Why maintain a park when you are about to tear it down?

It’s too bad that the large groups who use the park to barbecue and big parties every weekend don't clean up after themselves, because the park has been as trashed every weekend as it is every year after the Fourth of July fireworks. The Parks Department even put in a big row of trash cans with a big banner asking people to dispose of their trash in the barbecue area, but it hasn’t worked. A lot of people who use the park have never respected it, so it will be interesting to see what happens when the new park opens. Prediction: a lot more park police handing out summonses, otherwise it will be trashed as well.

I have been biking down to Battery Park and up the west side, and what a difference it is not to have garbage and grime everywhere, and without multiple competing 500 watt sound systems drowning each other out. There are also clean bathrooms, nice playgrounds, beautiful lawns. and plenty of places to eat and drink, while the lone East River Park hotdog cart long ago disappeared. Even the Italian ice guy gave up trying to sell anything there. So while the East River Park is being destroyed, at least those of us who can get over there still have the Hudson River.

It's horrific. Coastal areas like Alphabet City have max 25-30 years before the sea takes over. This boondoggle for de Blasio's donors will wreck 20% of the park's remaining use. This, barely 2 years after we lost the doomed soccer field/track for 1 year of wasted millions in renovations. (Of course, it's in the first part of the park marked for destruction.) All I want to say about our electeds is that they don't really care about us.

What a waste of time! And now they want to appeal!
This is just delaying the only flood protection in the works.
The City will not back down, or change anything, the whole thing is corrupt.
We need flood protection as soon as possible, delaying the start of the work doesn't benefit anyone.

I have a couple questions... Does the Parks Dept. do ALL the work or are sone contractors going to get super rich from this? If the wall is built, wouldn’t water come inland at the ends of the wall? Thus, wouldn’t the only way to prevent rising water level damage would be the impossible task of building a wall around the Entirety of Manhattan? Didn’t everything pretty much get back to normal eventually after the Sandy flooding in our area? And lastly, isn’t there some proposal to do a second renovation in 10 years raising the wall/park up Again? Please let me know these answers if anyone is so inclined. To me, this whole reno is by far one of the most Shady and Ridiculous Ideas I have ever heard IN MY LIFETIME. And it always takes way longer than they say it will.

@4:31am - without rehashing all the details, here's some brief answers to your questions - oh, yes, contractors will get rich off this. DeB made sure his cronies got the contract. You are correct to question the effectiveness of a wall. It may or may not help, but yes, water will just pour in around the sides as it did at Stuy Town during Sandy. There is/was talk of building a flood barrier around all of Manhattan, but that has gone nowhere. There was an ORIGINAL plan to deal with this that was essentially using the FDR to build a berm to absorb floodwater all along the East River. The trees would have been left in place as they are critical for holding the earth together. This plan was agreed upon by everyone until DeB stepped in and came up with the current waste of time, money and resources, not to mention how it will negatively affect everyone who lives near it.

Add this to the pile of ERP controversies: