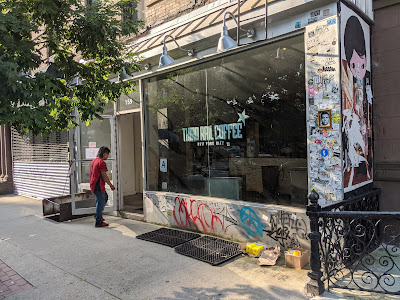 There hasn't been any official notice about a closure. Third Rail Coffee had shut down at the start of the NY PAUSE in March.

Earlier this summer, we spotted a Termination of Lease notice on the door that stated rent was due for April, May and June on the storefront. (This despite the state’s eviction moratorium.)

Third Rail, an outpost of the original on Sullivan Street, opened here in the summer of 2013. It was a nice spot that offered views of the historic St. Mark's Church-in-the-Bowery across the street.

Thanks to Dan Scheffey for the photo!

bring back the shoe repair! i loved him!

Honestly, there were too many coffee houses to speak of here in the EV. As awful as these closures are for many of us, I also think the reset might be good in the long run. More thinking outside of the box. Something different. Just a thought.

I keep wondering how that evgrieve readers who keeps responding that there are too many restaurants, too many bars, too many banks, too many whatever don't open their own businesses - maybe they should try running a butcher shop, a shoe repair joing, a fish shop, and whatever else they keep asking for and they'll see what demand there is for those places.

Third rail had the best baristas in the city, with great music taste. The space was so cozy. I enjoyed every minute

I really liked this spot and would get my coffee or tea there on Saturdays. A good place to meet friends or just have a cup of coffee alone. Friendly staff. I will miss this place.