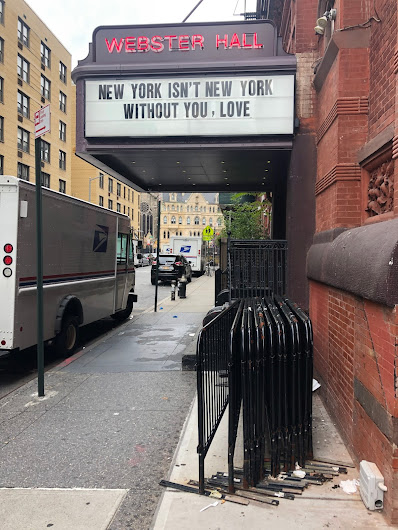 There's a new message on the marquee at Webster Hall: "New York isn’t New York without you, love." (A St. Vincent lyric.)

This replaces the previous COVID-era message here on 11th Street between Third Avenue and Fourth Avenue... 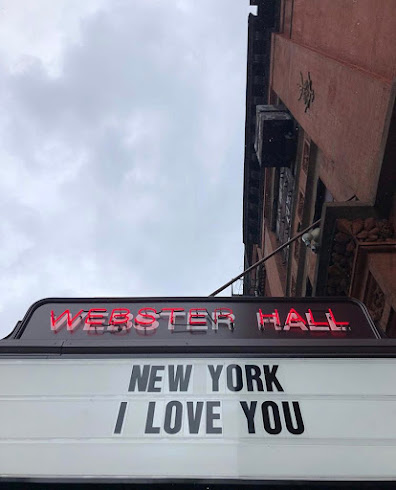 Meanwhile, concert venues around the city remain shuttered during the pandemic, with no timeline for a return.

More than 100 independent music venues in the city have come together to lobby Congress for help as the COVID-19 crisis. (Webster Hall isn't in this category, as its owned by BSE Global and The Bowery Presents, AEG Presents’ regional partner, who acquired the operating rights and assets to Webster Hall in February 2017.)

The group is called New York Independent Venue Association (NYIVA), and is working in affiliation with the National Independent Venue Association (NIVA), which formed toward the beginning of the pandemic. They are trying to get politicians to vote for in favor of the Save Our Stages and Restart bills, which were introduced last month in the Senate. Those bills would provide much-needed support and sustain venues during this period when most are completely shut down.

"These entertainment hubs are critical to their local economies and tax bases as employers, tourism destinations, and revenue generators for neighboring businesses such as restaurants, hotels, and retail," the group said in a statement. "Independent venues exist in every state across the country; they were the first to be closed, they will be the last to open. The economic recovery process will extend past just reopening the front doors, requiring solutions unique to the industry."

Local music venues taking part include Berlin Under A, Bowery Ballroom, Bowery Electric, Drom, Lola, Mercury Lounge, Nublu and Nuyorican Poets Cafe. This link has more about the campaign, and what you can do to help.
Posted by Grieve at 11:30 AM

I understand the thinking behind the slowness of Cuomo and D'assio but they need to be realistic and caring about the Business Community already. Should all Gyms stay closed? How about allowing them to stagger Patrons in by a reservation system? How about reduced seating/attendance for Concerts, Gallery Openings, etc? All they are doing is killing the economy, killing the city and costing thousands of people their jobs. C'mon you two, open your eyes, you are killing the working/job generating community with this overreaction.

Why not do live shows like I've seen recently in the UK? Outdoors build discrete raised platforms 6 ft apart for no more than 6 people who arrive in the same car. Ditto for indoors, with plexi dividers, though obviously that would drastically cut back on capacity due to limited space but at least you get to see a live performance. VIP for everyone!

Because it sucks, that's why. Myself and friends are NYC's top showgoers, and we won't waste our money on those faux shows.