Yoga to the People won't be reopening on St. Mark's Place 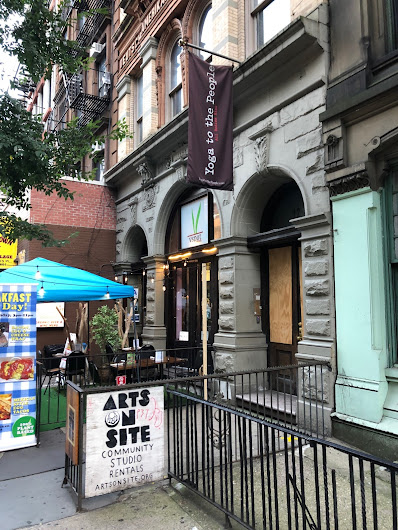 Yoga to the People, the studio with the pay-what-you-can fee structure, has closed all of its NYC locations, including the flagship outpost at 12 St. Mark's Place.

A simple message now greets visitors to its website:

Yoga to the People is permanently closed and will not be reopening after Covid-19.

Yoga to the People opened its first NYC studio here on St. Mark's Place between Second Avenue and Third Avenue in 2006.

Thanks to readers who shared this Vice investigation from July 24 titled "Fear, Control, and Manipulation at Yoga to the People." The article interviews more than 30 people who knew or worked with founder Greg Gumucio, which "depict him as a predator with a penchant for controlling and sexually manipulating bright and often vulnerable young women."

To date, there has been little guidance about reopening for NYC gyms and fitness boutiques such as yoga and pilates studios. Gov. Cuomo has said that gyms across the state can reopen on Monday with a 33-percent occupancy rate, but that date didn't apply in the city.

More than 1,500 gyms across New York had previously filed a class-action lawsuit against Cuomo to put legal pressure on the state to allow reopening.

Small yoga and pilates studios in the neighborhood have had to pivot to offering classes online.

Illumina East, the second-floor yoga studio at 96 Avenue B between Sixth Street and Seventh Street, closed earlier this summer.

Email ThisBlogThis!Share to TwitterShare to FacebookShare to Pinterest
Labels: closings 2020, Yoga to the People

There's some context to this closing beyond the covid crisis, though- the entire yoga to the people chain has been shut down due to allegations of sexual assault and discrimination

I would guess it had more to do with Greg Gumucio's being outed as an abuser than COVID?
https://www.vice.com/en_us/article/4ayqk3/he-knew-everything-fear-control-and-manipulation-at-yoga-to-the-people
and
https://www.thecut.com/2020/08/yoga-to-the-people-scandal-what-went-wrong.html

There may be more to it than just covid...https://jezebel.com/the-lauded-exploitive-fitness-gurus-endless-reign-1844543687

Seems related to this expose about managerial misconduct, to put it lightly: https://www.vice.com/amp/en_us/article/4ayqk3/he-knew-everything-fear-control-and-manipulation-at-yoga-to-the-people?__twitter_impression=true

I for one will miss the advertising placard out on St Marks showing the healthy sweaty gorgeous yoga lady with big boobs.

wow, super gross thing to comment on an article about a man who has been accused of sexually manipulating women but ok bro

Greg Gumucio is that you?

The article was about the closure of Yoga to the People on St Marks. the sexual predator info was added on. Instead of considering that the placard was a blatant signal, you just want to cancel my comment! Maybe instead you'd consider, gee, where else do I see exploitive images of woman for REALLY NO REASON AT ALL placarded on the sidewalk and maybe where there is smoke there is fire. For current sex cult manipulation, all gender, join ANTIFA.

Not the best place for beginners. The classes were so overbooked that one teacher couldn't possibly properly instruct everyone.

Received an email today from Blink Fitness stating they will be reopening Wednesday Sept 2. Basically it is going to mostly be a reservation system for most Manhattan locations, at least for now

Yes I opted to suspend it for a few months to see how things go with flu season coming up. Been sick from gyms too many times in the past but resuced capacity and cleaning is pretty appealing

Here’s a tip: if your yoga teacher is rubbing himself up against your body or touching you inappropriately in order to give you an “adjustment,” then he’s probably giving himself the “adjustment.” Also, if your yoga instructor is a convicted felon with a history of abuse allegations, walk away. Unfortunately, many of these self-styled gurus and yogis are masters of mind control and manipulation, and many of their students are vulnerable young women.

Almost every founder of every major style of yoga seems to have been accused of sexual and emotional abuse. If this happens to you, immediately walk away and report him to the authorities, or do what these women did and set up an Instagram account to allow others to report what has happened to them.

This is the first line of the Vice article: “When he arrived in New York in 2006, Greg Gumucio was a convicted felon, accused rapist, and former follower of the infamous yogi Bikram Choudhury.” That’s not just a red flag, that’s a red flag that’s on fire.

Bikram Choudhury himself has faced lawsuits alleging sexual harassment, assault, racism and homophobia. After losing a several court cases and many millions of dollars in court judgements and facing millions more in unpaid legal fees, the founder of Bikram Yoga fled the country and is still a wanted fugitive with a warrant for his arrest, yet people still attend his trainings overseas in Spain and Mexico, because there is no cure for stupid. The same thing will probably be the case whenever Greg Gumucio resurfaces. Do yourselves a favor and find another yoga studio.

This is still a shame. I really enjoyed the St Marks location. Good, strenuous vinyasa and the crowding was actually a positive. Used to try and give $20-30 per class to support. Had no clue about the assaults.

I did yoga teacher training at yoga to the people. I believe the survivors. I experienced some of the things in these articles myself. I spoke up, but was frequently gaslighted. After a while, when the people/place that have helped heal you also hurt you, it becomes really hard to distinguish what’s what. That kind of trauma is really complicated. I’m so, so glad this place no longer exists. Our neighborhood is safer with its doors shut.

A new studio has opened in this space, St Marks Yoga, under new management. It's still affordable at $10/class and the instructors are really great!

Ok so it's 2022 and here I am researching whether the studio was open. I'm sad to find it's closed because it was a sanctuary for me. I really loved a couple of the instructors, loved my space by the window and learned yoga there. It was a bright light for me to look forward to in my day.