The Other Music Documentary is now available on streaming services 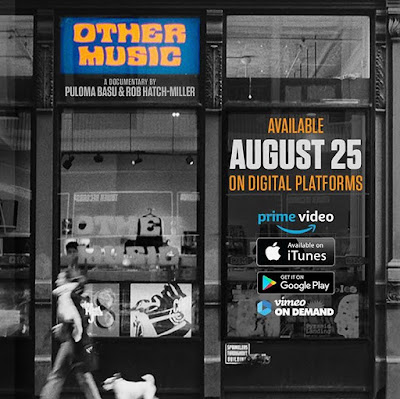 The Other Music documentary makes its digital-platform debut today, streaming now on iTunes and Prime Video.

The film chronicles the 20-year history and legacy of Other Music, the shop on Fourth Street between Lafayette and Broadway, its influence on music in New York City and its closure in June 2016.

It was originally scheduled to have its theatrical debut in April at the IFC Center on Sixth Avenue.

Other Music's owners cited rising rents and the growing hardship of selling music out of a physical store as reasons behind the closure.
Posted by Grieve at 2:00 PM

I saw it. Very disappointing. Endless drivel, cliched, boring. Doesn't do a good service to that wonderful store, that I loved so much.

Funny: “endless drivel, cliched, boring” hits the nail on the head for OM in general. They were great for a year or so and then became a parody of a hip indie alt record store: a sales staff that clearly thought they were too cool to deal with a majority of the customers coupled with buyers who seemed to not actually understand what a good record was. In the end, the closing of Tower was a far bigger loss.

Probably not going to watch the doc, but I loved the store. Great selection of used records at nice prices + they ordered me new records that weren't in stock. Such a great store overall. Definitely missed.