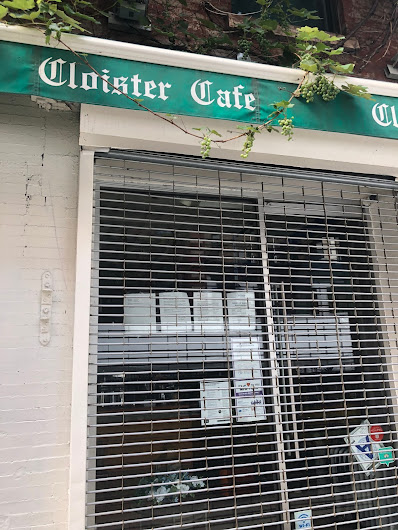 A judge denied a temporary restraining order that would have reinstated the liquor license at Cloister Cafe after it was suspended for alleged social-distancing infractions earlier this month by the State Liquor Authority.

As Page Six first reported over the weekend:

Applying for the order, the bar, run by Nick Drobenko and Provocateur’s Mike Satsky and Brian Gefter, argued that, "Our business will not survive another closure." But the judge said they'd "provided little hard information" to support that.

"I do not doubt that the statement is made in good faith and may prove accurate," Judge Lewis Kaplan wrote Thursday. "But the plaintiff's owners apparently own the building in which the restaurant is located and thus may be far better able to survive than many other restaurateurs."

According to the SLA report that led to the suspension:

Investigators found the restaurant operating as a nightclub and hookah lounge with a live DJ, documenting numerous patrons ignoring social distancing with lines of customers congregating in front of the premises without facial coverings, at least twenty patrons consuming alcohol indoors under a fixed roof, and no receipts for food purchases.

For their part, Cloister Cafe claimed that the SLA didn't properly investigate the alleged violations — and just copied the claims from a Gothamist article.

Meanwhile, on Avenue B, the owners of Hairy Lemon posted a letter to patrons about their recent SLA suspension... 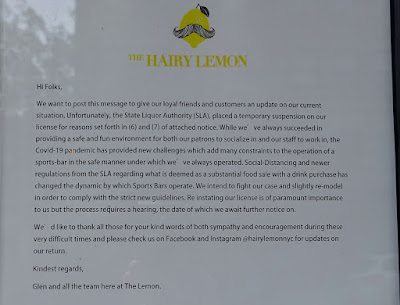 According to the SLA:

On August 8th, investigators with the state's multi-agency task force observed patrons standing and drinking without facial coverings outside the premises and confirmed that the location was operating a bar-type service, selling drinks to multiple patrons without substantial food.

The letter on the front door at the Hairy Lemon states in part that they "intend to fight our case and slightly remodel in order to comply with the strict new guidelines."

Cloister Cafe / Toucan Sam's should stop lying and own up to the fact they blatantly disregarded social distancing / mask wearing protocols as witnessed by everyone who lives on the block and saw their provocatively overcrowded party scene that night.

But they won't as they think they think their sh*t doesn't stink, from their ice princess servers to the manager who, one summer, lit up the entire facade with tacky South Beach neon lights and a dollar store disco ball that spun lasers into everyone's windows. It looked like a UFO invasion of a brothel.

Gotta say, a UFO invasion of a brothel doesn't sound that bad of a thing.

"It looked like a UFO invasion of a brothel" - that is, I believe, the best sentence that has ever been typed into an EV Grieve comment box. Kudos!

I misremembered. It was winter, sometime after Christmas. The only reason I mention it is I went over Cluster Cafe and asked the manager if he could reposition the disco ball as the lights were coming into my bedroom and putting on a show I didn't sign up for. He was a dick and flat out refused. I said, look, I could've been passive aggressive and made an anonymous 311 complaint but instead I came over here and nicely asked you to reposition it. Again he snapped no, so I told him he had 15 minutes to reposition it before me and my neighbors bombed 311 with calls. He moved it and I went back over and thanked him.

It's not hard to be a good neighbor.

"It looked like a UFO invasion of a brothel." THAT IS BRILLIANT!

@10:51am, apparently it IS hard for Cloister to be a good neighbor, since they so often are not.