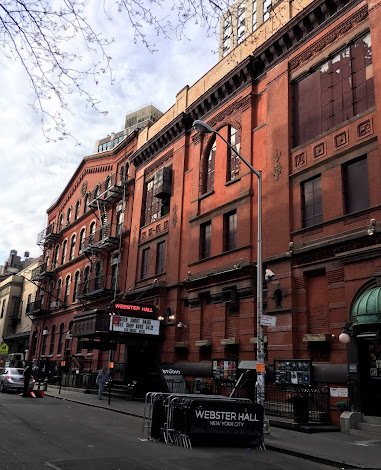 Here's news about the venue on 11th Street between Third Avenue and Fourth Avenue via Billboard:

After 27 years of operating Webster Hall, the Ballinger family is selling the 131-year-old Manhattan concert hall to AEG Presents and Brooklyn Sports and Entertainment. The two firms will assume operating rights, assets and the long-term lease from building owner Unity Gallega while Bowery Presents will take over booking and talent buying.

According to the Post, the new owners have promised that any updates to the facility "won’t spoil its musty, lived-in charm."

Brett Yormark, chief executive of Brooklyn Sports and Entertainment, told The Post: “We’re going to preserve what Webster Hall means to the consumers and artists, but we will contemporize it.” Expect food and beverage upgrades, with possible bathroom enhancements.

The Webster Hall deal was valued at some $35 million.

Webster Hall, built in 1886, was landmarked in 2008. Here's more history via Off the Grid a few years back:

Webster Hall has hosted a wide range of parties and meeting over its 129-year-old history. In its early years it “acquired a reputation as a center of leftist, socialist, anarchist, and union political activity”, according to a January 1888 Brooklyn Daily Eagle article.

There won't be many poor kids waiting on lines with these new owners. Nope. This place is for the fortunate. Moxy Affect. 2 new restaurants on 2nd &11th and EVil? This happened really fast. But that's how money works.

It doesnt matter how much they charge to get into these places, you can't buy class and you cant rent authenticity. The Moxy, Webster Hall and E.Vll are all just part of the same theme park: safe spaces for corporate-sponsored, pre-planned programmed entertainment for the play date generation. I'm not a math major, but it looks like when it comes to the East Village, the lowest common demnominator has won.

@Giovanni: Yes, the lowest common denominator, but with the highest costs, so a lose-lose situation for those of us who actually live here.

K-Fed, lol. He even had a search engine for a while. Maybe he's retro enough now to get a regular gig at the Moxy.

Will the new owners have to make an appearance at the Community Board or do all the licenses automatically carry over to the new owners? If not, then this is the time for the relatively spineless community board to start asking some hard questions and demanding concrete changes to the way this business has operated and taken over the neighborhood.

Whoever at AEG and/or BP doesn't like your band? No shows for your band at Mercury Lounge, Bowery Ballroom, Music Hall Of Williamsburg, Brooklyn Steel, B.B. King's, PlayStation Theater, Highline Ballroom, and now all three live music venues at Webster Hall. Tough shit if you don't like it. And you/your band better not say publicly anything someone at AEG and/or BP doesn't like.

Can AEG-BP and Live Nation NYC be sued for monopolization of the live music venue market in NYC? I'm serious. If AEG bought Irving Plaza, Gramercy Theater, Le Poisson Rouge, and Hammerstein Ballroom they'd be the ONLY game in town i.e. the only large live music venue owner in NYC.

The new owners will have to appear before CB3 SLA committee. The amount of vetting CB3 puts them through is going to depend on how much pressure is applied by the community.
They were on the list for the April 13th mtg (6:30pm 10 Stanton St) but are redlined now. E.Vil isn't on the SLA mtg list at all.

The monopoly issue is very interesting. If it could be proven that bands had been excluded from these venues there could possibly be a group boycott claim. I don't think that would prevent the sale, but if bands were willing to come forward and provide evidence, Schneiderman might bite.

Glad to see Erin Hussein posting here. I understand she is running for the City Council post being vacated by the term limited Rosie Mendez. I don't know much about Ms. Hussein--but I hope through posts like this to get a better idea of her views.

Erin 10:47pm here. Thank you for commenting on my post and running for the City Council seat being vacated by that stooge for big business and luxury housing developers Rosie Mendez.

I think AEG Live and Bowery Presents are positioning themselves to corner the entire large non-arena live music venue market in NYC with this sale.

After this sale, AEG Live will own Webster Hall along with PlayStation Theater, B.B. King's, and Highline Ballroom while BP owns Terminal 5, Bowery Ballroom, The Music Hall Of Wiliamsburg, Brooklyn Steel, and Mercury Lounge. The only other large non-arena/theater NYC live music venues owned by neither company are Irving Plaza and Gramercy Theater owned by Live Nation NYC and the only independently owned large non-arena live music venues in NYC Le Poisson Rouge and Hammerstein Ballroom. If AEG and/or BP bought these four venues they would literally own and control ALL the large non-arena/theater venues in NYC. They could also control the booking at all the city arenas (Madison Square Garden, Barclays Center, and Radio City Music Hall.)

So Bowery Presents will book Webster Hall. Gee, isn't booking Terminal 5, Bowery Ballroom, The Music Hall Of Williamsburg, Mercury Lounge, Brooklyn Steel, other NYC venues (plus ones in Westchester County, Long Island, and New Jersey) and shows they already book in the Grand Ballroom at Webster Hall enough for them? They have to control all three venues at Webster Hall, too? That's way too many venues controlled by one live music show promotion company, sorry.

Let's say a band is so big they could sell out Irving Plaza and IP takes half the door on a 1100 sell to in a 1200 capacity room. Why the fuck would they play IP when they could play 1500 capacity Webster Hall, give away 400 tickets, and not only make the same amount of money as they would make if they played IP but more if Webster Hall takes only 40%? Everyone wins: the band makes more money on the same draw, literally hundreds of people get in for free where x amount of them buy more drinks and band merchandise cuz hey, they got into a $40 show for free so why not spend a little more on drinks, and AEG-BP takes a show away from IP and has this band's NYC show forever. That's good in that monopolist Live Nation NYC is getting hurt but what if someone wanted to open an independently run venue of comparable size? How could they compete?

Ah, the plot thickens as the ownership of Barclays Center is part of this now blatant play by them and AEG Live to corner the ENTIRE large/non-arena/theater NYC live music venue market.

Why does Bowery Presents want to book all three venues at Webster Hall as well as the venues they own? Again, what they have is not enough?