Looking for signs of Artichoke on 14th Street 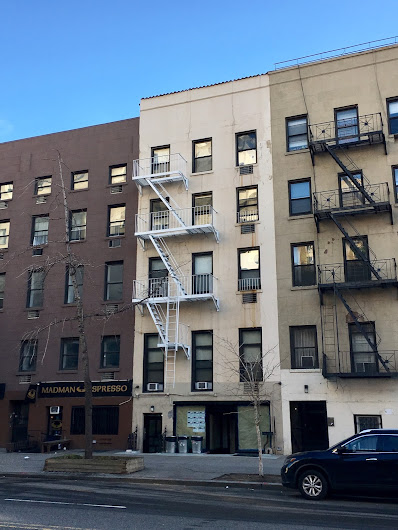 Last November, we noted that Artichoke was apparently moving to a new space directly across 14th Street from their current compound.

Several people have asked if this was still a go. Well, DOB permits show that Artichoke signage is in the works for No. 321 between First Avenue and Second Avenue...

There haven't been any formal announcements just yet.

We did recently detect a piece of discarded Artichoke crust outside the new locale... 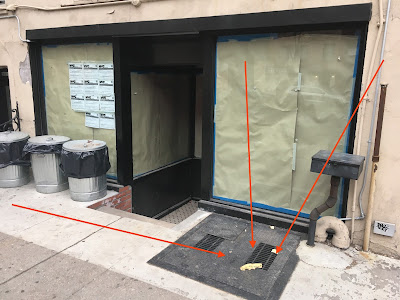 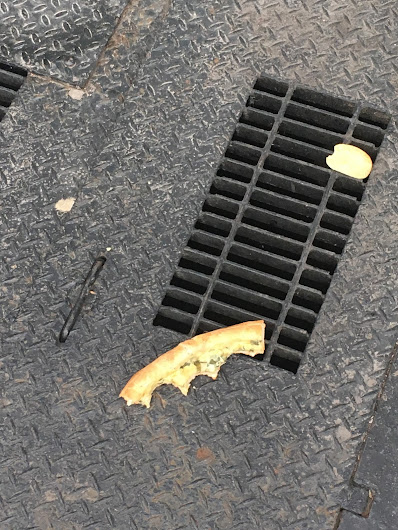 One EVG reader who lives near Artichoke says that the move can't come fast enough... calling Artichoke, who opened here in 2008, a bad neighbor, with crowds, bright lints and the "constant humming of the old exhaust vents" ... 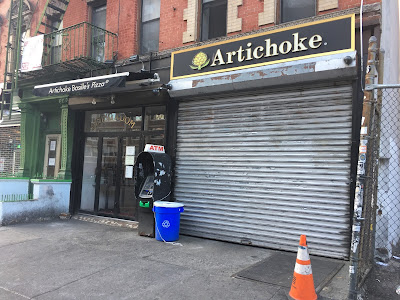 There are currently nine Artichoke locations, eight in NYC and one in Berkeley, Calif.
Posted by Grieve at 4:04 AM

I don't know if anyone remembers—actually, I'm sure someone does—but that Artichoke storefront was sub-divided after the previous tenant left; it had been a huge storefront that housed "Lite Gourmet," a Filipino place that specialized in chicken and pork adobo, and cans of imported drinks like calamansi (lemon/lime), mango, and guava.

I've never had Artichoke pizza, partly because of the long lines, and partly because I can't see braving the wait only to find out they only have dairy cheese. No thanks; my go-to pizzeria is in Greenpoint, and is called Screamer's.

9 locations, really? So there are that many people willing to pay a hefty amount for what looks like a triangular slab of regurgitation? Yow.

Why the HOSTILITY to EVERYTHING?????

Thank you 11:34 ... my thoughts exactly. The force is strong with the E.V. Gripers lately.

Prepare for a likely hostile response regarding pointing out the hostility.

Their Sicilian slice is delicious.

I went to a meeting at the 9th precinct once...where the community can talk about their complaints and issues. First person said noise from Artichoke was keeping her up til 3am. Drunk bros on the bench drinking beer. Second person said the same. By the time they asked a fifth person why they were there the cops finally said WHO ISNT HERE ABOUT ARTICHOKE PIZZA and two guys did not raise their hands. It was the owners of Artichoke Pizza. They said we are taking away the bench and no more booze or smoking out front. We fixed all the problems. Everyone yelled and called them liars. They were like we...I guess we will maybe try harder. It was obvious they didn't give a crap about the maybe 30 people there to complain about them. They were laughing and seemed really obnoxious. I shall never go in there.

their pizza is heavy and gross, the crowd is often screaming and fighting, and they are bad neighbors -- seem like reasonable reasons to be "hostile" in genuine (not paid) comments...

If reality is too hostile for you then move to another planet. You want hostile? Go to Artichoke Pizza, and hope the experience doesn't choke you. Their pizza is good but it's so heavy you can't eat it more then a few times a year unless you want to look as fat as Donald Trump golfing. The bigger problem was their Staten Island attitude when they first opened. Odious. It was like they had never met anyone from Manhattan. They were practically feral. They would make everyone wait on these slow lines in ther cramped bad excuse for a Pizza parlor. Who has a pizza parlor in New York with no seats? Even Dollar Pizza lets you sit down! Thats why they had the benches outside, and after the illegal benches were gone all they had was this sad excuse for a wooden counter. Then they gave you attitude like they were doing you a favor by charging $4-$5 a slice. Then a "friend" would come in and they would let them skip the line. Noe that the lines are gone maybe their attitude will impove. I doubt it.