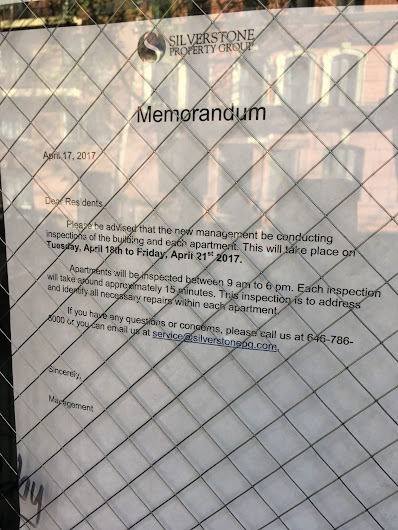 News broke (via The Real Deal) last week that Madison Realty Capital was replacing controversial landlord Raphael Toledano as the property manager of 15 East Village buildings while a deal to transfer the ownership was worked out.

A judge of the U.S. Bankruptcy Court for the Southern District of New York directed all forthcoming rents and managing rights to Silverstone Property Group, the property management arm of Madison.

As part of the order, the judge prohibited Silverstone from renovating the vacant apartments for the time being aside from emergency repairs.

“Through its initial visits with the properties, [Silverstone] has determined that many of the issues are related to the prior manager’s elimination of staff from the properties, which in [Silverstone’s] opinion are crucial to the smooth operation of the properties,” Silverstone managing director Phillip Lavoie wrote in a court document.

An EVG reader shared the above photo from a building on 12th Street... showing a flyer in which Silverstone reps were to inspect each apartment. "Each inspection will take around approximately 15 minutes. This inspection is to address and identify all necessary repairs within each apartment." Similar flyers were found on the other former Toledano buildings. (We did not hear about how all this inspection business went.)

Silverstone has been accused in the past of predatory practices, allegedly cutting the gas to a building in Chinatown after elderly rent-stabilized residents turned down buyout offers, according to DNAinfo. (The tenants eventually won the right to have the gas restored.)

Madison has reportedly said that Toledano owes some $140 million, including $125 million in loans against the 15 properties, plus interest and attorneys’ fees.

Meanwhile, this message is on the front door of a building on Fifth Street ... next to the five buildings that Madison has taken over from Toledano... 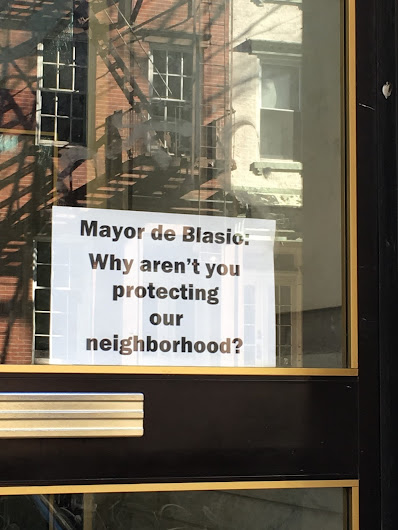 Raphael Toledano tenants take to Midtown streets to speak out against their landlord and his lenders
Posted by Grieve at 4:20 AM

I have seen these signs and am concerned about why they want to inspect the apartments. Is it really to see if there are issues? Can't they tell the tenants to get in touch if they need repairs made? I am wondering if they want to get into the apartments to find pets or other issues that they could use as grounds to evict people.

Unfortunately the answer to that sign is, he has no plans to.

Sorry, folks, unless there's a profit or votes for him in it, you'll get no help from DiBlahBlahBlahsio.

You cannot be evicted for a pet if you've openly had it for longer than 3 months. We have a guy in our building that is an animal hoarder. That is a different story. Not to mention he's an all-around hoarder and his apartment is one HUGE fire trap, not to mention tons of other violations. Now he has court ordered inspections so the rest of the tenants in the building can feel safer. Inspections are a necessary evil sometimes.

After my buddy David Peel passed, I went to that block of East Fifth Street (between Second + Bowery), where he had an apt since the 1970s and where I once had an office. I hadn't been on that block in several years. It is so sad to see almost every small shop and business GONE, all with "For Rent" signs in windows.

What was once a cozy friendly block now resembles a ghost town.

Newsflash! It's not the mayor's job to protect your neighborhood.

A landlord is allowed to inspect your apartment if they give timely notice. It is a good idea if the property changed ownership.

Those empty store fronts are all Toledano buildings where he forced out legitimate tenants, including Podunk Tea Room and several artists.

Here's hoping the landlord is legit about making all the needed fixes and that the tenants of this building don't have to live under stress anymore.

Week 1:
Inspecting unseen properties they are now managing isn't unusual, it should be expected.
325 E12th St building's cooking gas was turned off May 18, 2016. By law and court orders, it must be restored.
In order to do this, every apartment will need to cooperate by providing coordinated access for the cooking gas line restoration, which is Silverstone's initial concern. There are pending tenant court cases and complaints concerning the gas turnoff. The Building Department continues to visit to these buildings due to tenant's complaints and lack of services.
The Silverstone employees who inspected apartment were friendly & professional. They presented a believable sincerity by starting strong with providing repairs. BUT, these men are not the "money " guys. The men inspecting apartments represented Silverstone Property Groups's facilities management division. They met contractors associated with the upcoming cooking gas line restoration.
They also supervised boiler room's much needed Heat Timer replacement on Monday 4/24, which should improve the operation of the building's heating system.
Workers were throughout the buildings are preparing hallways for painting and performing general repairs as needed.

No lawyers.
No buyout offer.
Not yet.

Madison Realty Capitol owns the Silverstone Property Group. They don't own the building's yet. They're the guys with the money who will eventually be dealing with tenants. Toledano still owns the properties.
Silverstone is the foreclosure court appointed "receiver" because Toledano was not attending to the building services. Many Superintendents and building workers either quit or were laid off when the foreclosure and bankruptcy were announced.
Tenants will most likely hear from Silverstone regarding leases & buyouts once they become the actual building owners, which won't happen until Toledano's / Brookhill's foreclosure and bankruptcy court proceedings are completed. By law, Silverstone cannot offer buyouts to Tenants. Not yet. The repairs being done should be considered court ordered. The building's are still the financial responsibility of the current owners, Toledano / Brookhill Properties.
Silverstone shares an extremely tarnished reputation that is similar to Toledano's. That information is easy to find on the internet. There are many documented tenant complaints of low buyout offers, unfounded evictions, reduced building services, building gas turnoffs and tenants complaints of fighting for their rent regulated lease renewal. Silverstone has been found to of the same tenant harassments that Toledano has been accused of, which are directed towards remaining rent regulated tenants.
This is the early stage of the 15 building takeover.
Silverstone's efforts seen in the last week are in Silverstone's best interest, not necessarily the tenants. The lure is to convince existing tenants that Silverstone has the tenant's best interest. It should be interpreted as Silverstone's reducing their financial responsibility of high cost improvements, that are legally required, before they actually own those 15 properties. Some may consider these improvements to greatly benefit existing tenants. Is that the true intention? This completion of this work now will reduce Silverstone's costs once they become the legal owners.
Tenant's should continue to be cautious.
Time will tell.

They have already torn down notices for lead samples taken by the health dept last week which is in violation. At 514 east 12th a second positive lead dust sample was found in this batch of tests .The building also has 3 market tenants with out cooking gas for a year . The building has loads of violations they need to clear as well as mouse infestations.They need to follow Local law 1 and the health code for Clean up proceedings. They are not setting a good impression .