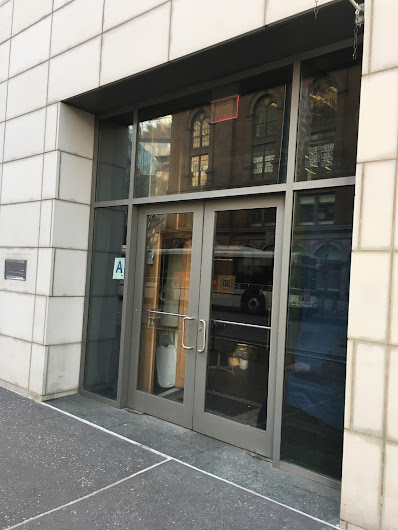 [Photo from the other day]

The idea for Coup came about in the wake of Election 2016.

“For the few weeks after the election, I couldn’t get out of bed,” he said. “It was all I could do to read the news.”

So, to snap himself out of it, he did what he does best: open a bar.

Gothamist has more on how all this will work:

The space features two bars, one of which will host a rotating lineup of the city's best bar talent, who will choose a cause of their choice to which that evening's bar sales will be donated. The list of signed on talent is impressive, including Best American Bartender of the Year for 2015 Ivy Mix of Leyenda, Jim Meehan of PDT, Joaquin Simo from Pouring Ribbons and Alton "Good Eats" Brown himself. Each will create specialty cocktails for their shifts.

At the other bar, guests are given a wooden token with each beverage purchased, which they'll drop into jars bearing the names of different charitable organizations. The donation groups will rotate on a day-to-day basis. The dollar amount from the tokens in each jar will be calculated, the total of which will be donated to said charity by Coup.

Cocktails and glasses of wine are $20 each; beer and cocktails are $15. Coup is also gratuity free. You can find the drink menu at the Coup website here.

The space at 64 Cooper Square was previously home to DeRossi's Bergen Hill.
Posted by Grieve at 4:00 AM

Will we ever be safe from people like this? What pretentiousness? What narcissism? Just open your glitzy bar, hire a PR person to bring in models and celebs make your initial money and then lean back and watch the bridge and tunnel trade make you your fortune until the next packager of fake dreams surfaces. I'm heading for a dive bar tonight!!

I'm already confused and I haven't even had a drink.

Oh, the horror of people trying to make a difference.

Let's see, they are cocktail people, so they do it by making cocktails. If you wanted to do the same you can go open PBRs at whatever shitty hole you prefer.

The $20 a drink goes entirely to charity. Try reading.

So, wait, now people are online bitching about the fact that someone is actually trying to do some good with a bar they open, instead of just live in the 'burbs on the profits they reap off the backs of the EV/LES? 20 bucks is very often what someone gives to a charity; in this instance you get to give to a needy organization of your choice AND get a drink, and you don't have to go online, give out your credit card info, and then get endless further appeals for more money. Sounds like a win-win to me, and I don't even drink, but hell yes, I'll be going down here every now and then to buy - something - especially after Chump signed that bill yesterday essentially de-funding Planned Parenthood, and drop my token into a jar.

Finally! I can have a safe space and an overpriced cocktail (yes, $20 is overpriced for a cocktail) while some pretentious douche tells me how I should be voting. If I wanted to give money to a charity, I'd just cut a check. Is he going to release financial disclosures showing exactly how much money will go to the charities? How are they going to define operating profit that goes in? What about the fact that most food and beverage establishments take a loss in their first couple of years?

Don't mix politics in my drink, especially when it's a very obvious marketing gimmick. You get to tell me how to vote when you pay my bills. Until then, you're just a bartender.

@10:38, if you think this is making a difference, I'd like to have a word with you about a bridge that I've got for sale.

I always resist when stores (Kmart for example) ask me to make a contribution to a cause (March of Dimes for example) precisely because there is no disclosure on their part--and they take the credit. I give to charities and get a receipt for my taxes (speaking of such things this weekend). I don't need someone else taking credit for my giving. Whatever happened to going to a bar to meet people and just enjoy the brew? Any regular bar goer wants to see the same bartender--someone wo recognizes them and has developed a relationship. Do I really want to see revolving faces of "star" bartenders? Does everything we do have to have some ulterior purpose?

The ACLU is not funded by the government. It is a private organization. Get your facts straight.

If you don't like the idea, don't go! I think everyone is finding their way to engage. It's a long fight and a few drinks may help.

I'm such a lame-o. I wouldn't even recognize a bartending star if one punched me in the face.

Try reading... "One-hundred percent of the profits..." I wonder if they'll be posting their profits... donations for the public to see?

People please let us not argue thus. Stuff like this is literally marketing 101. Cause marketing: a type of marketing involving the cooperative efforts of a for-profit business and a non-profit organization for mutual benefit. The proprietor in this instance deserves neither vilification nor praise, it could be argued. The biggest brands and companies ply this on their customers regularly, nobody seems to mind much. This is just how business is done in 2017.

The moral integrity of such a practice in general however, should be up for debate.

Coup is non-tipping, so $20 includes paying the staff.

It is hard not to be a little cynical these days when a bar of all things runs a charity event for it's opening night and promised other nights with all proceeds going to the charity of that star bartender's choice.

Santa Con (a supposedly charity event) sort of ruined drinking for the betterment of others for me.
It is also just a little to easy to bring Trump into this press release to get people in this place. I wonder if this owner opened a bar on Staten Island if they would say how thrilled we have a president making America great again.

I don't drink, but I do eat [vegan] and will be even more likely to patronize Mr. DeRossi's other establishments.