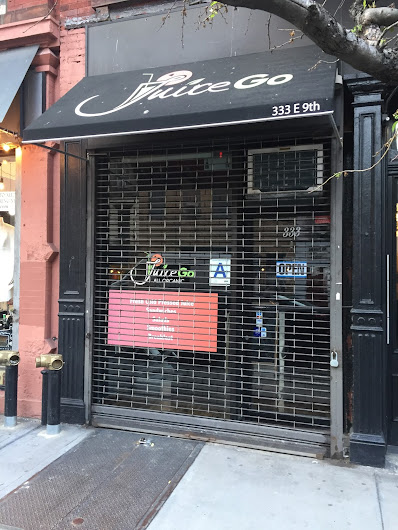 Several readers had noticed that the storefront, which sells a variety of made-to-order cold-pressed juices, smoothies, salads and sandwiches, hasn't been open lately. There hasn't been any sign on the storefront noting a temporary closure.

Sadly, it turns out that founder-owner Satish Patel died on April 9.

Sorry for the long closure everyone. The founder of JuiceGo and our dad passed away Sunday morning. Please keep us in your thoughts as we continue to mourn the loss of our Father Satish Patel. Thanks everyone.

There's no word at the moment when/if JuiceGo might reopen.

“JuiceGo is a groundbreaking concept because its owner/founder Satish Patel has developed a unique cold press juicing device that produces 100 percent fresh and nutrient-filled cold pressed juices that are made-to-order on site. Mr. Patel has extensive experience in the health food industry, having owned one of the largest produce markets in New Zealand. He’s also spent 15 years managing and owning a number of hospitality businesses in the United States, and decided to open his first JuiceGo shop in New York City.”

Oh, that's so sad. My condolences go out to his family and friends.

So sad. He looks so young too.

This is a man who brought joy into many people's lives. May he continue to do so, even though he has departed.
Condolences to family and friends.
Never gone as long as we remember.