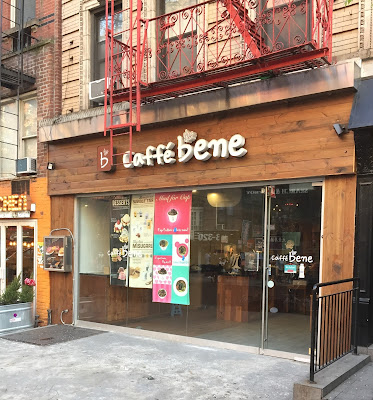 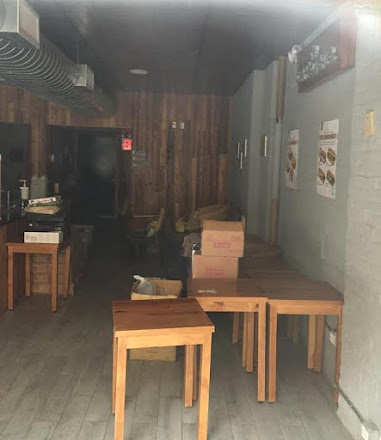 [Photo this morning by Steven]

This location, one of 1,600 worldwide that is part of the South Korean-based company, never seemed all that busy since opening in December 2015.

According to brokers quoted in the Commercial Observer in August 2015, the building's landlord, Beame Realty, "is looking to tap into the hedge funds and tech companies coming to 51 Astor Place, as well as the New York University and St. John’s University crowd."

Caffe Bene had signed a 10-year lease, with asking rent in the $240 per-square-foot territory.

The storefront previously housed a Pinkberry, which closed at the beginning of 2015.

Work starts on the 2 Caffe Bene spaces in the East Village
Posted by Grieve at 4:31 AM

One down, one to go. But woah that Landlord quote is something.

Now that it's obvious to everyone that the hedge fund stock market manipulators and tech crowds from the Death Star are not wandering onto the chaotic and greasy tourist trap also known as St Marks Place, perhaps a little rent reduction is in order? Or maybe they are using apps to have everything delivered to their desks? Or maybe they just went to Starbucks. Which means that no one needs to be on St Marks Place to do business, unless you want to sell Japanese street food, five dollar sunglasses and dollar pizza to skateboarders.

The Cafe Bene was pointless for the neighborhood, there's already hundreds of overpriced coffee shops selling pastries around. I've seen several close, don't know how any of them do well in this city to be honest.

I don't think the future is strong for this chain in the U.S. There is no uniformity or standards beyond signage applied to the stores, so you never know what to expect when you walk into one, and, man, those low, tiny tables. What is up with this chain and the choices in furniture? It's like they want to make it as uncomfortable as possible for their patrons.

The one on 13th and A seems to do well. I'm going to check it out.
They have a nice one on the southwest corner of 49th St. and Broadway. It's two floors with several shelves of books lining the wall on the west side. Nothing on anarchy, unfortunately.

As more chain restaurants open in the EV and it's storefronts begin to look like a shopping mall food court, I would imagine tourists will scratch the neighborhood off their list of places to visit. I recently had someone come into my "independent" business and ask about Ost, another cafe on Ave A, and a vintage furniture shop nearby, and each time I told her, "they were gentrified out of business". She seems pissed off at me like I was the landlord of those buildings.

As for Cafe Bene which I never heard of before it opened on Ave A, it may have legs as independent cafes close come lease renewal time. It also has that chain polish that newly transplants for the American continent will instinctually be drawn too. Safe, clean, all new, funky free and Siri searchable.

I know these are franchises, so I hate to see them close, but NYC and the East Village don't need Korean Starbucks all over. More independently owned non corporate coffee shops please.

Except for the people who lost their jobs--does anyone think this coffee shop will be missed? The people working in 51 Astor Place and in 770 Broadway have lots of choices: Starbucks at Astor Place, Starbucks at Broadway and 9th Street, Blue Lane (is that the name?) in 51 Astor, and a small but decent coffee place on 10th Street just east of Fourth Avenue. I think people chained to their desks (and the roof top gardens and gyms that some of the buildings have) don't want to spend the 15 minutes walking to and from a mediocre coffee shop on Saint Marks Place. Long live convenience.

This joins one on 14th between 5th and 6th, which closed in the winter.

Now, how much per square foot? I just spit out my... oh, never mind!

But I'm curious: when faced with such an astronomical figure, how does a logical business person do the math? Does it ever occur that it just won't work? That selling that many widgets or cups of this or plates of that simply isn't feasible?

Here, I sympathize more with the small business person. Unless the chain that runs 1,600 shops worldwide wants visibility and the handicap of running a loss-leader location, its brass should know better.

The more important question about Bene is not the closing but why did they even open. 8th Street is so filthy, dirty, ugly with narrow sidewalks, why would anyone think that there's business to be made on that block? Workers from Death Star is so far fetched it's preposterous. The reason they opened on 8th is that they have budgeted money for so many openings a year. And 8th was picked - winner or loser - it didn't make any difference... it's just a writeoff.

"According to brokers quoted in the Commercial Observer in August 2015, the building's landlord, Beame Realty, "is looking to tap into the hedge funds and tech companies coming to 51 Astor Place, as well as the New York University and St. John’s University crowd."

Caffe Bene had signed a 10-year lease, with asking rent in the $240 per-square-foot territory."

Is there a tree somewhere that grows all these dumb business owners?

Misugaru grain latte is the most wonderful thing in the world. You just don't know.

Rents per square foot are typically listed on an annual basis.

Totally agree ...whoever runs these places doesn't give a crap .. the one in Chelsea continually got C, D & F grading ... mice galore ! The people who worked ther got really bad and were selective on who they want to wait on ... finally closed

Who knows, most places list monthly rent, not annual - but this wasn't a real estate listing
just a comment about what they are looking for in terms of money for square footage.
It's a ridiculous sum no matter how it's figured.

Here's a tip for the tech-chasing landlord. Those tech places have their own starbucks and cafeterias already inside their offices.
They're all set for yogurt and coffee. Maybe try catering to the people in the neighborhood who actually want to spend at your store.